The energy, imagery and promises seemed no match for the horror show still unfolding in the Gulf 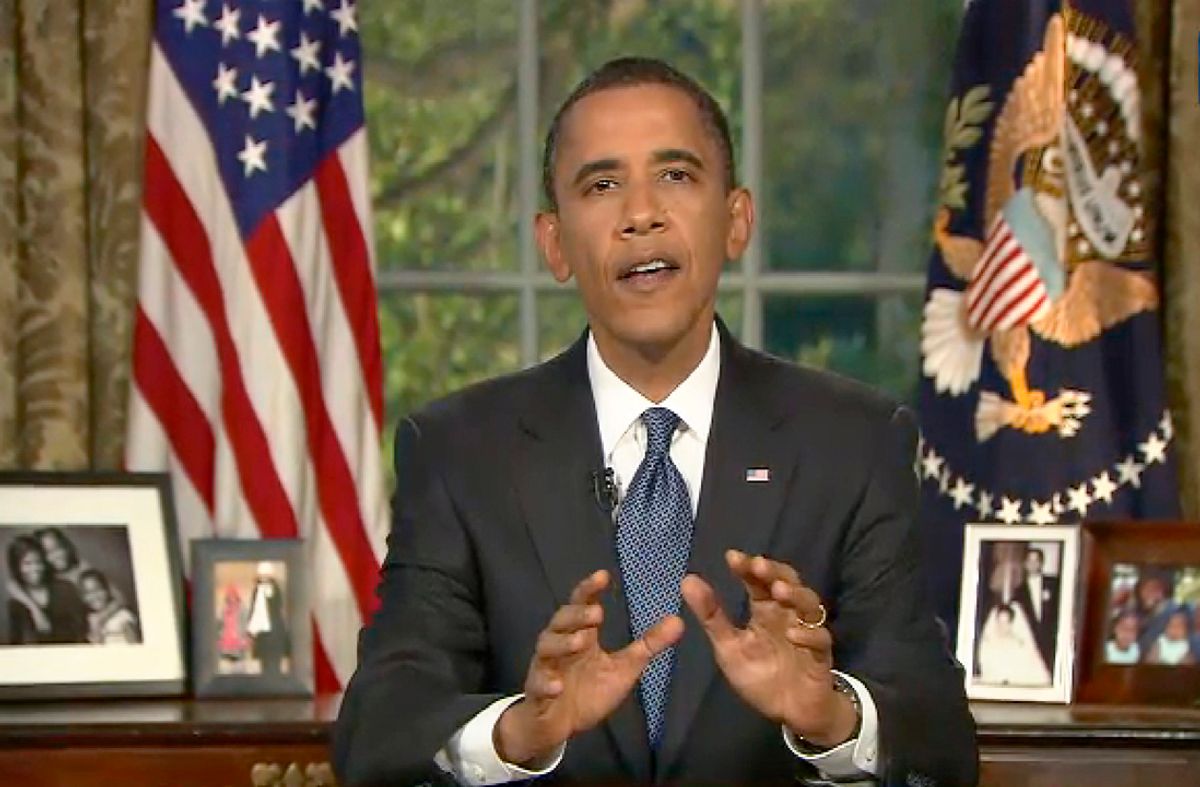 U.S. President Barack Obama addresses the nation from the Oval Office at the White House in Washington in this television frame grab June 15, 2010. REUTERS/Reuters TV (UNITED STATES - Tags: DISASTER ENERGY ENVIRONMENT BUSINESS POLITICS) FOR EDITORIAL USE ONLY. NOT FOR SALE FOR MARKETING OR ADVERTISING CAMPAIGNS (Reuters)
--

I was underwhelmed by President Obama's first Oval Office speech, as I expected to be. From the moment he began, hands folded on his desk like a well-behaved student, the imagery and energy was off, inadequate to the visual, horror-movie scope of the Gulf oil disaster.

Obama said some good things. He made a strong call for a transition from our fossil-fuels economy, declaring that "the time to embrace a clean energy future is now." He said that when he meets with BP chairman Tony Hayward tomorrow, he will tell him he needs to set aside a generous compensation fund that will be controlled by an independent third party. He committed to a long-term Gulf Coast Restoration Plan, headed by Navy Secretary Ray Mabus, and announced that the respected Michael Bromwich will head the compromised Minerals Management Service.

At one point I thought the president was about to do what I'd hoped for, unrealistically, this afternoon – explain why he was wrong to drop his opposition to expanded offshore oil drilling, and recommit to his old position. He didn't. He only said that he had endorsed opening up more offshore drilling "under the assurance that it would be absolutely safe –- that the proper technology would be in place and the necessary precautions would be taken. That obviously was not the case in the Deepwater Horizon rig, and I want to know why." He then committed to a National Commission to study the disaster and explore what new environmental protections are needed. (If he paid any attention to the House Energy Committee's grilling of top oil industry execs today, he'd know the industry has no idea to cope with a disaster of this magnitude.)

I'm not sure anyone walked away from the speech clearer on what Obama will do to hasten the clean up and prevent future disasters. And while I was happy he did make a short pitch for "a strong and comprehensive climate and energy bill," if you blinked, you missed it. He noted that such a bill had been passed by the House, but he didn't take the opportunity to describe what's in it and make the case for its most controversial features, particularly a carbon cap. He didn't note that the bill is stalled, and considered dead, in the Democratic controlled Senate. He didn't create any sense of urgency to break the political stalemate that is likely to keep the bill locked up there permanently.

Even though the speech was wishy-washy, Digby noted that CNN's John King insisted "that 'some people' will find it inappropriate that Obama opened up a political debate at the time when he is calling for unity." That's probably true, but since Obama will be damned for playing politics whatever he does, he ought to play to win. He's not doing that right now.