An Ohio landmark burned to the ground during a thunderstorm 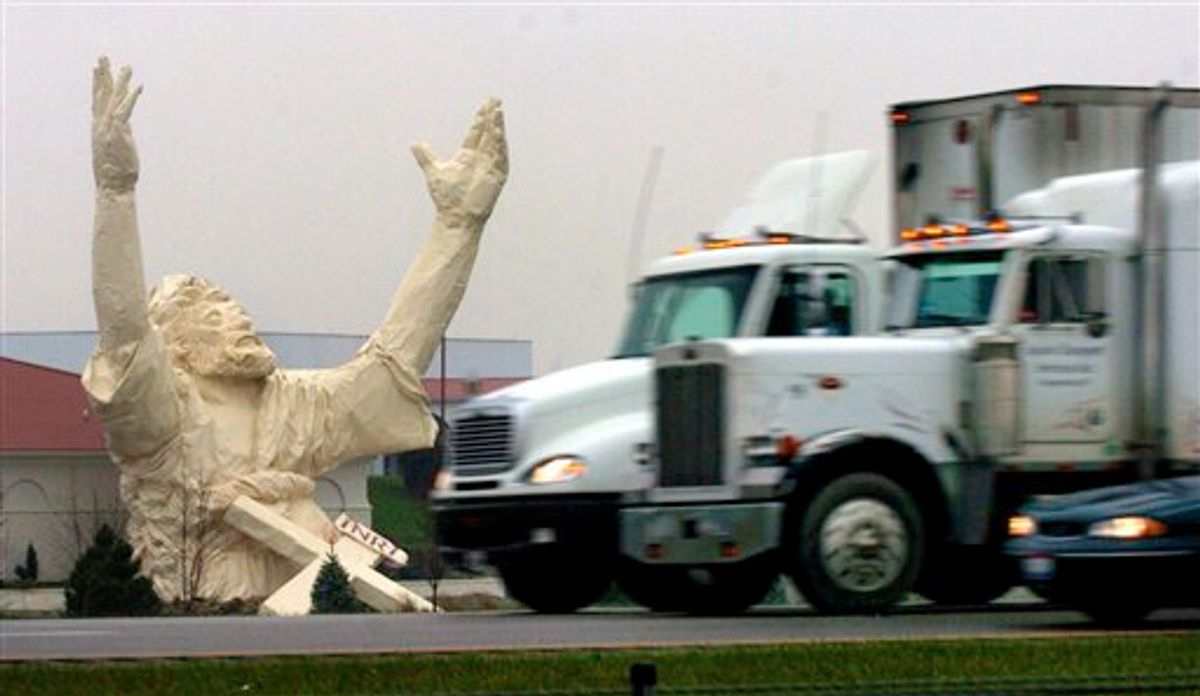 FILE -- A Nov. 17, 2004 file photo shows traffic on I-75 just north of the Monroe, Ohio, going by a six story high statue of Jesus under construction at the Solid Rock Church Nov. 17, 2004. The 62-foot-tall statue made of plastic foam and fiberglass over a steel frame was stuck by lightning and destroyed Monday June 14, 2010. (AP Photo/The Enquirer, Glenn Hartong/file) -- Mandatory Credit -- (AP)
--

A six-story-tall statue of Jesus Christ with his arms raised along a highway was struck by lightning in a thunderstorm Monday night and burned to the ground, police said.

The "King of Kings" statue, one of southwest Ohio's most familiar landmarks, had stood since 2004 at the evangelical Solid Rock Church along Interstate 75 in Monroe, just north of Cincinnati.

The sculpture, 62 feet tall and 40 feet wide at the base, showed Jesus from the torso up and was nicknamed Touchdown Jesus because of the way the arms were raised, similar to a referee signaling a touchdown. It was made of plastic foam and fiberglass over a steel frame, which is all that remained early Tuesday.

The fire spread from the statue to an adjacent amphitheater but was confined to the attic area, and no one was injured, police Chief Mark Neu said. The fire department would release a monetary damage estimate Tuesday, he said.

Travelers on Interstate 75 often were startled to come upon the huge statue by the roadside, but many said America needs more symbols like it. So many people stopped at the church campus that church officials had to build a walkway to accommodate them.

The 4,000-member, nondenominational church was founded by former horse trader Lawrence Bishop and his wife. Bishop said in 2004 he was trying to help people, not impress them, with the statue. He said his wife proposed the Jesus figure as a beacon of hope and salvation and they spent about $250,000 to finance it.