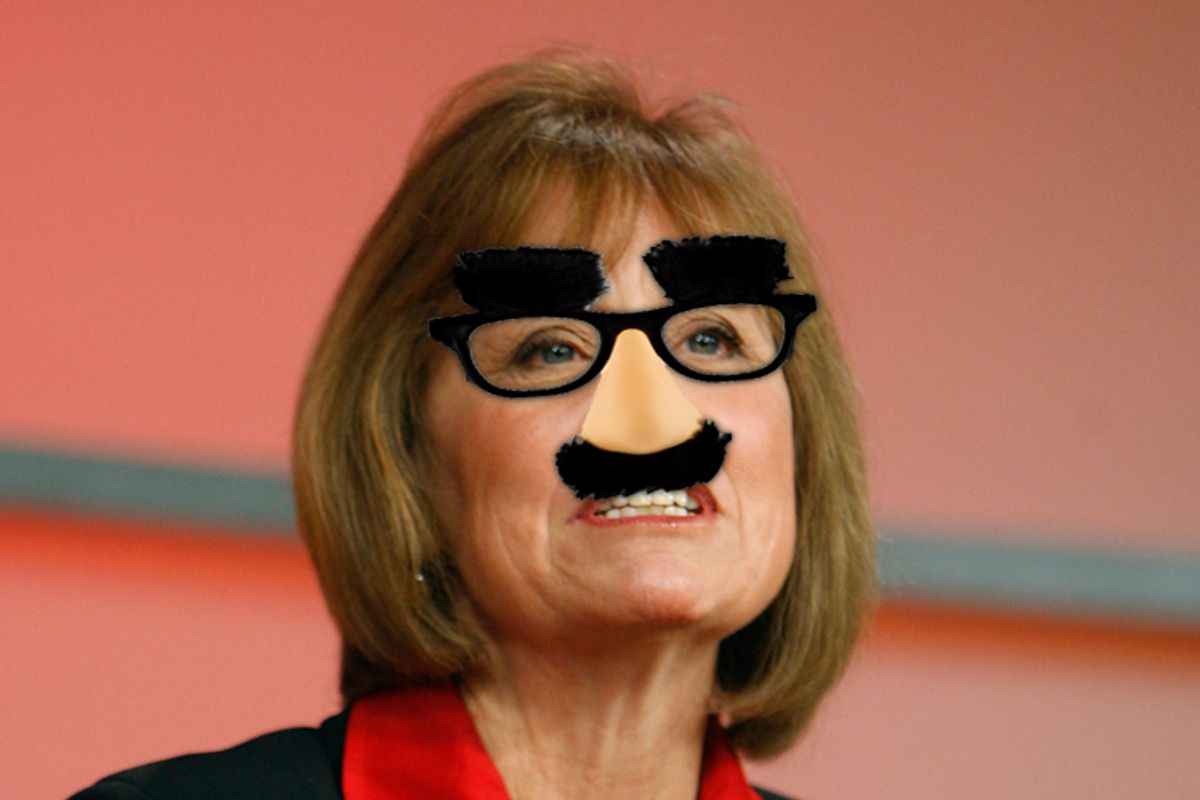 Nevada Republican nominee for Senate Sharron Angle was in DC yesterday to lunch with the Senate GOP and meet the Republican campaign committee. She did not have time to answer any questions about anything from the press. The mainstream press, anyway. She did sit down with the National Review.

Angle's one comment to the assembled members of the mainstream press was "yes," in response to basically being asked whether she enjoyed lunch.

The reason Angle is unable to answer questions is because she is an Outsider. Also, she only has two full-time staffers. She needs a couple weeks with the campaign pros behind Scott Brown's victory before she's qualified to say what she believes to reporters. Once she owns a truck, you can ask all the question you want, lame stream media.

And Cornyn acknowledged that Angle is not yet prepared for what he considers to be a coming onslaught of attention. "I don't think anybody would be prepared for a race. where 20 or 30 million dollars is going to be spent in negative advertising," he said. "It's going to take a few weeks, I would think, but, you know, it's really up to her."

But as I said, Angle did make time for the National Review.

Her statement on Social Security is a series of completely incompatible buzz-phrases borrowed from both parties. She admires Tom Coburn, Jim DeMint, and Michele Bachmann. She seems to tell a verifiable untruth about removing the "issues" page from her website. (It is now back.) She also defends her advocacy for a Church of Scientology-developed quack drug therapy program by claiming Scientologists are the victims of religious persecution.

What we’re seeing here is a very slippery slope. Whenever religion becomes the focal point — we saw this during John F. Kennedy’s race and also, to some degree, in Mitt Romney’s race — whenever this becomes the focus, we Americans should be very, very concerned. We have a First Amendment that guarantees us all the right to worship as we please. We as Americans should, even if we don’t agree, should defend their right to have that right. It shouldn’t come into play in any political arena.”

God, if a real journalist manages to get anything out of her before the consultants do their work, she'll be a goldmine of nuttiness.