"Cheapskate Next Door": The cheapskate's revenge

The recession turned scorned penny pinchers into heroes. We look at why they're happier, and greener, than you 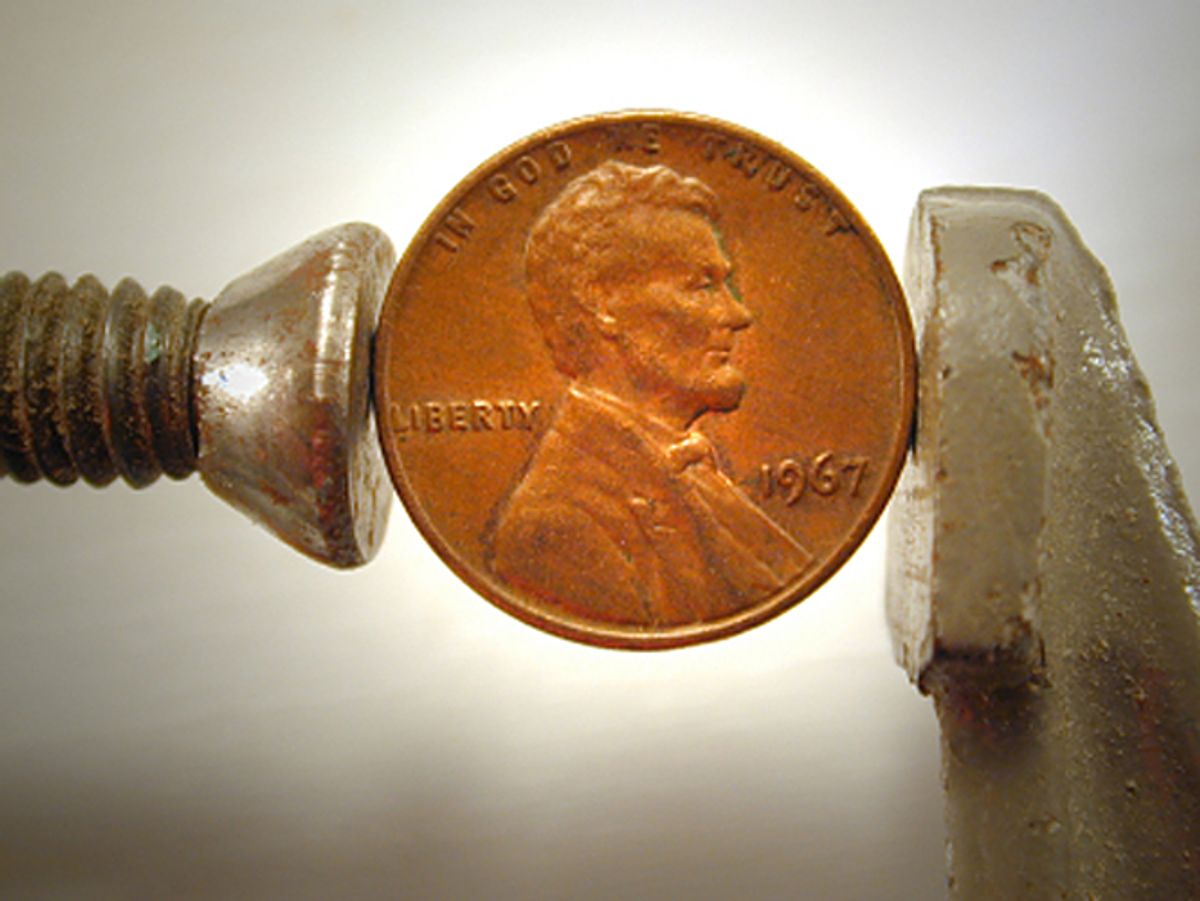 Before the economy imploded, cheapskates were considered a pitiful bunch -- frumpy coupon moms racing across town to save 19 cents on baby wipes, joyless penny-pinchers subsisting on ramen noodles. Meanwhile, the cool kids were starting wine collections and equipping their homes with plasma TVs and stainless-steel kitchen appliances.

Then, in the drop of a Dow Jones average, frugality suddenly became fashionable, and all those still-unpaid-for off-road vehicles and granite countertops became symbols of foolishness and excess, rather than success. Lifestyle sections brimmed with redemptive stories of former mortgage brokers/derivatives traders/entertainment publicists who had suddenly discovered the humble joys of family game night and three-bean soup. The general conclusion: We had all overextended ourselves, and now we all must learn a new way.

This narrative largely neglected the Americans best equipped to speak to the simple life: the people who have always lived frugally. In his new book, "The Cheapskate Next Door: The Surprising Secrets of Americans Living Happily Below Their Means," author Jeff Yeager gives voice to the sensible folks who spent the boom years quietly paying down their mortgages and making their kids earn their allowances (if they got one at all). Yeager surveyed and interviewed more than 300 fellow cheapskates -- traveling the country on his bicycle and crashing on the couches of his thrifty brethren. He quickly discovered a group of people who bore little resemblance to the stereotypical tightwad. Not only do Yeager's cheapskates donate more money to charity than the general population, they also have lower divorce rates and higher education levels. Although their politics and religious views span the spectrum -- from Christian conservative to hippie freegan -- they're united in their rejection of consumer culture, excessive borrowing and waste. They also believe the cheap life is the happiest.

I talked to Yeager on the eve of his second bicycle/couch-surfing book tour about the joys of thrift, the sorrows of spending and why your grandmother is greener than you are.

How do you define a cheapskate?

A cheapskate is someone who lives almost exclusively debt-free with the possible exception of a home mortgage, and even then about 85 percent of the people I polled said they had paid off their mortgage early or planned to. These were the folks that during the heyday of the economy and real estate boom were doing the absolute unsexiest thing: paying down their mortgage. Which meant they could lose a job but not lose everything else. But it goes deeper than that: These were people who never relied on money to make them happy.

What does make them happy?

Cheapskates value experiences more than material objects. They are very self-confident and are not only unconcerned about keeping up with the Joneses but sort of thumbing their noses at the Jones.

No, most of us don't like to shop. I wanted to show there is a class of people who don't view shopping as sport or therapy and who are living a more pre-1980s lifestyle. In the 1980s, three-quarters of household items were purchased to replace something that was broken or worn out. Today that's less than 25 percent.

What's the reason for the other 75 percent?

It's either something new that we never had before but we have to have one, or we have one that works just fine but it's last year's color. The 1980s were not that long ago, so that's been a huge shift in consumption.

What's the relationship between cheapness and environmentalism?

As an environmentalist, I find this very compelling. These folks are the greenest people I've ever known, even though about half of them said they have no real interest in environmental issues. But arguably, the greenest thing that most Americans can do is simply consume less. It's not about buying expensive green products. It's about buying less.

Do you think the green movement has been hijacked by advertising and consumerism -- that it's become just another gimmick to sell us, say, eco-friendly running shoes?

I think to some extent the popularity of the green movement is being fueled by the very thing it should be against: overconsumption. Environmentalism has become popular because now there is cool, expensive green stuff that we can buy. Take the example of a hybrid vehicle for $35,000. It's good for the environment, but it's not as good as if you took your gas guzzler and carpooled to work. Don't get me wrong -- it would be best to carpool in your Prius, but I don't see many people doing that.

Do you see more people starting to examine their behavior and lower their consumption, for both economic and environmental reasons?

I've been writing about frugality long enough to have seen it go from something that no one really talked about to now everyone is writing about saving money. I give a lot of money-saving tips, but in this economy we're missing the golden takeaway: It shouldn't be "how do we afford it?" but "do we even need it?"

When it comes to the prospect of living a greener life, I fear that just the opposite is happening. I've seen statistics that say that as the economy has gotten worse people's lip service to living green has actually decreased. They are saying, "Boy that green stuff costs more and money is tight right now." They didn't take the final step to say the greenest thing I can clean with is the cheapest: baking soda and vinegar. Fixing things, recycling, doing without -- those things don't cost any money.

What about food? The conventional wisdom is that the healthiest foods -- organic, free-range, etc. -- are also the most expensive.

I found that cheapskates had almost the same likelihood of being a vegetarian or buying organic as the general population, about 5 percent. The people in my book believe that you don't have to spend a lot of money to have a healthy diet and in fact some of the most unhealthy foods cost a lot -- processed food, red meat and so on. They weren't vegetarians but they ate lower on the food chain, and a lot of them said they had one or two meatless days a week at their house. They do that to save money, but it also makes them healthier. Similarly, they don't belong to gyms but they did things like decide to not have a car and bicycle and walk places instead.

You're painting a very different portrait from the stereotype of a cheapskate as someone who is obsessed with money.

Well, we all know people like that, but that wasn't the type of person I set out to profile. About half the people I surveyed had very strong religious reasons for their frugality: They just didn't feel right about using more than their share. The other half of the people hardly had any religious beliefs, including many who said they were atheists, but they cited things like environmentalism, social justice and quality-of-life issues as their reason for living more frugally.

Were there common denominators in terms of their politics?

The cheapskates I surveyed are all over the board, from conservative Republican to very, very liberal Democrat to socialist.

So if these people have fewer economic demands, are they able to work less than the rest of us?

Some of them actually carry around an index card that says, based on my current salary if this costs $100 that means I would have to work five hours of my life. I think that's what separates them from the bargain hunter or the yard-sale enthusiast. Maybe it's not worth running around to several different yard sales in the hope that you'll find a pair of Size 7 boots.

As far as their ability to work fewer hours, I wasn't able to draw any real conclusion on that. I think the reality is most jobs are 40 hours a week. But one thing that came across pretty strong was that about 40 percent are involved in jobs that they enjoyed and were very passionate about -- many worked professionally for churches and other nonprofit organizations. For the cheapskates who didn't like their jobs, about 20 to 25 percent, most said their frugality was part of what allowed them to retire early.

So what would be your advice for avoiding education debt?

It's true that college costs more in inflation-adjusted dollars than it did 20 or 30 years ago but it doesn't cost that much more. What has changed is our idea of what a college education should look like. Plain tuition costs are only slightly higher than inflation. My point is, consider taking an old-school approach to college education. Living at home with parents will save most college students $30,000. There is also the option of attending a community college and paying a fraction for those credit hours and then transferring to a four-year school for that final degree. There is this mind-set that education is important so don't even think about the financial part. The cheapskate says education is very important, but they don't take the next step to say borrow as much as you want.

What is the single most important thing that the rest of us can learn from cheapskates?

Less can be more. You need to do yourself the favor of deciding what is enough for you. We're so conditioned to think that if we have more money, more stuff we'll be happier, and I think that's the overarching bond between all of these people. They have answered this question and decided, sure, we could afford to spend more, but why would we? It wouldn't make us any happier.

It seems old-fashioned and fuddy-duddy, but there is also something radical about it.

It's as radical as the way most of our grandparents lived.

My grandmother is 103, and when I asked her about the Depression she said they didn't have any money but it wasn't that bad because there was nothing to buy.

It's almost like the stuff we can buy is driving our unhappiness.

Sara Eckel is a freelance writer whose work frequently appears in the New York Times, Working Mother, Time Out New York, Forbes.com and many other publications.