It's time for Democrats to stop counting on the support of older, hawkish Jews 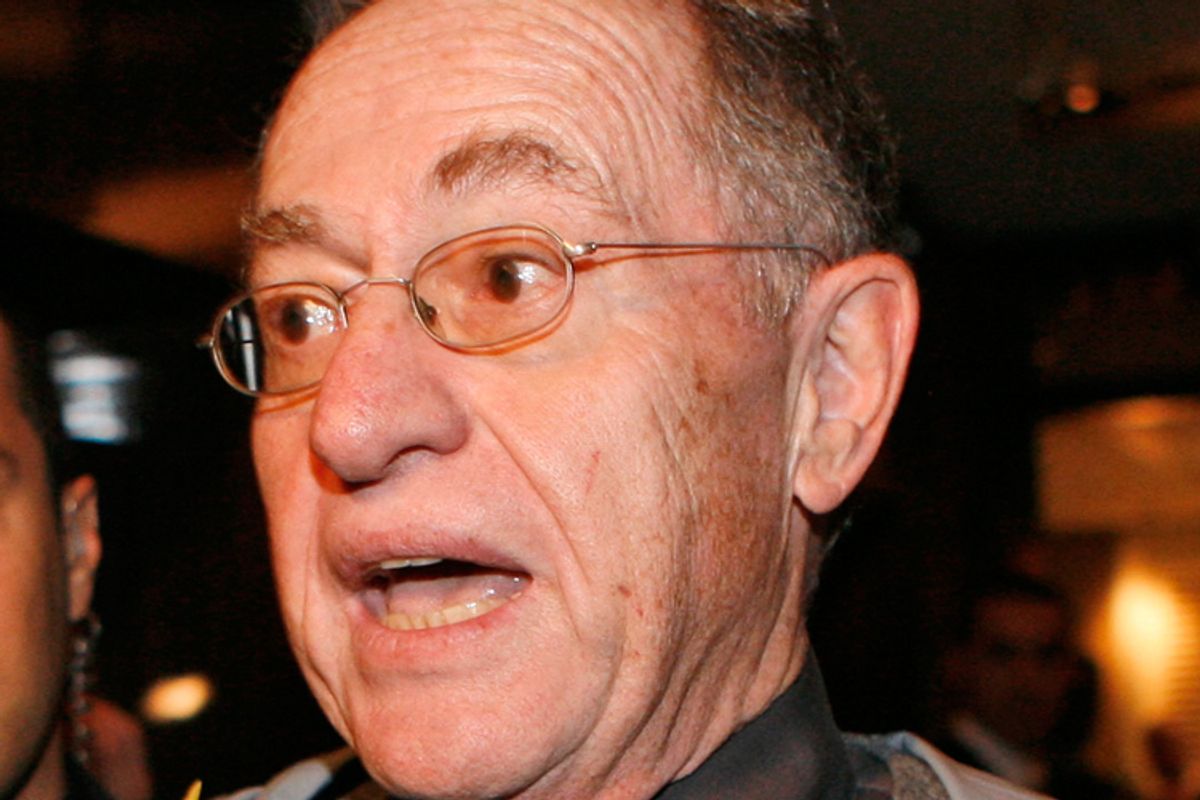 Harvard Law professor Alan Dershowitz will host a fundraiser for a Republican congressional candidate in Illinois. The candidate, Joel Pollak, studied under Dershowitz at Harvard. He is running against Democrat Jan Schakowsky.

Pollak is running because Schakowsky -- who is Jewish -- does not love Israel enough. She does love Israel, of course -- "I thought about my childhood again and the number of times I had saved my nickels and dimes to buy a tree certificate that we used for birthdays and anniversaries to plant trees in Israel and make that desert bloom," she said on the floor of the House earlier this year -- but she also might support the existence of a Palestinian state.

Seriously, the evidence that she is even remotely anti-Israel is ridiculous, even by the standards of the professional right-wing smear artist.

She is a self-hating Jew because she never specifically denounced Jimmy Carter or Cindy Sheehan. She is bent on the destruction of the Jewish state because her campaign website links to Amnesty International and the Center for American Progress.

Her actual crime is supporting the upstart liberal Jewish lobbying group J Street. The group aims to make it politically acceptable to actually criticize the actions of the Israeli government by demonstrating that plenty of American Jews don't agree with AIPAC and people like Dershowitz. You know, people who think "automatic" complete destruction of entire villages is a legitimate state response to terrorism, as long as you warn them first, thus making the loss of lives their fault. (This is the "why are you hitting yourself" school of counterterrorism.)

And now Dershowitz is demonstrating that Democrats cannot count on his support, just because he's always been a Democrat.

People like Dershowitz (and, say, megafundraiser Haim Saban, and other very hawkish longtime Democrats) will broker no dissent on Israel, and should the Democrats adopt any sort of rational policy toward our support for that nation's government and their policies, there's no reason for these lifelong Democrats to remain Democrats. If they care more about Israel's right to expand settlements than they do about climate legislation or financial regulation reform, they'll support Republicans.

(And that's not an accusation of disloyalty or anything of the sort. It's perfectly legitimate for a voter to prioritize foreign policy over domestic issues, and Dershowitz believes that supporting Netanyahu is good for America, too.)

I'd suggest that the party is better off without the support of people with the beliefs and priorities of Alan Dershowitz, but, you know, if the thought of mildly irking the finance industry spooked most Democrats so much, I can't imagine they'd willingly part with another major source of campaign funds.

Schakowsky's seat is pretty safe. This is more of a warning shot than a true threat.