Will "Snow Ice" be the next Pinkberry? 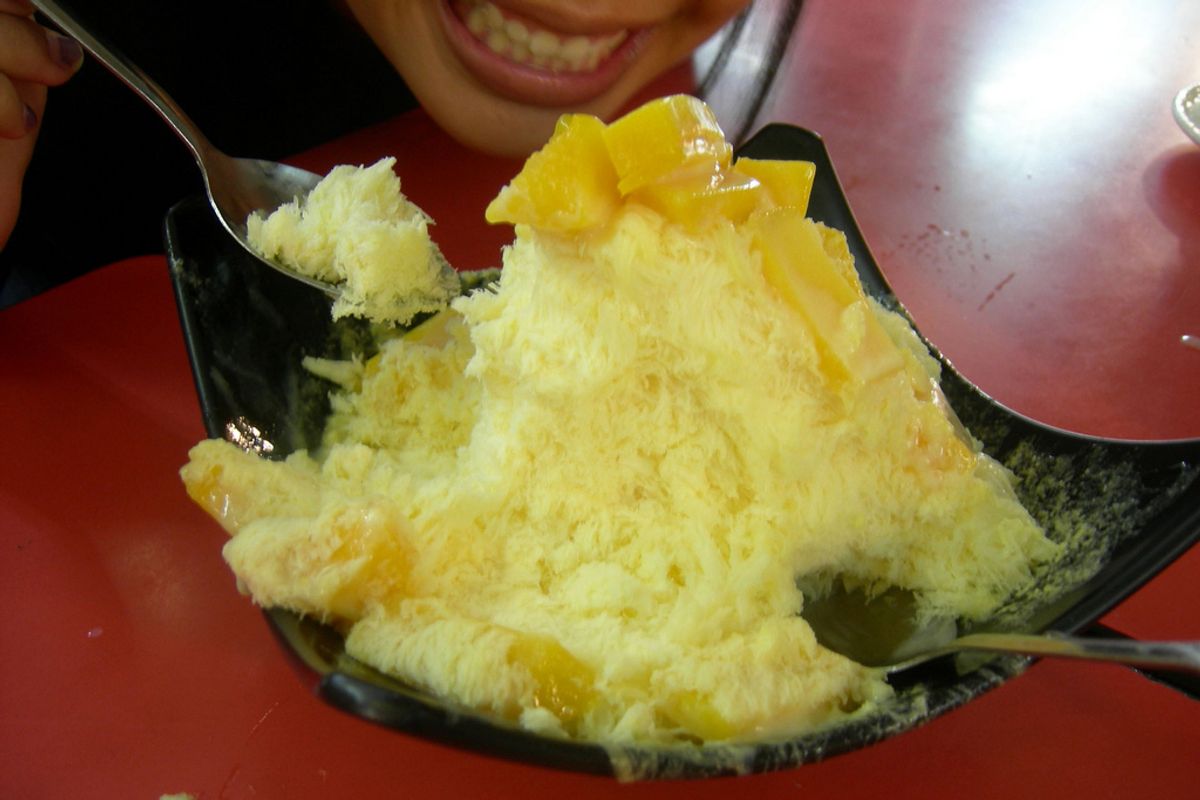 Summer heat has descended on most parts of the country, which means that it's time to break out the sunscreen, the unfortunate Ke$ha singles, and the icy treats. Usually that means ice cream and frozen yogurt, but this year, a new dessert from Asia -- with the endearingly Chinglish moniker of "Snow Ice" -- is gaining buzz in some parts of the country as an exotic and healthy twist on Pinkberry and its imitators. Like frozen yogurt, Snow Ice is cold and made with dairy but it's got a lighter, fluffier texture and looks vaguely like fake snow heaped into a cup. Like other frozen desserts, it's made by combining cream, milk, water, sugar and fruit, but unlike ice cream, it's frozen until completely hard, and then shaved into ribbons by a machine and deposited into a cone.

The ice itself comes in a myriad of flavors (like mango, strawberry, blueberry and chocolate), and customers can choose toppings to go with it (fruits or, more traditionally,  beans). The experience of eating it changes as the Snow Ice melts. First, as Tasting Table describes it, it tastes "dense and chewy," but as it warms, it turns into something closer to sherbet. The Asian culinary site Makansutra describes the texture as "unbelievably smooth, light and very airy," and writes that it "has a mild sense of richness which sorbets and low-fat ice creams cannot deliver." Furthermore, the treat is surprisingly healthy -- containing somewhere between 100 and 200 calories.

Supposedly Snow Ice was invented in Taiwan -- where it's most famously sold near Taipei's  Shilin Night Market -- but Singapore has its own take on the item, which is allegedly slightly sweeter than the Taiwanese version. According to Makansutra, Durian (the notoriously smelly Asian fruit) is apparently an especially popular flavor in Singapore's Snow Ice shops. It's mostly stayed under the radar in the last few years, popping up occasionally on travel and Asian food blogs, but now it's becoming available at businesses on this side of the Pacific -- in some parts of California, Hawaii, Texas and, now, Illinois -- so that's likely not going to be true for much longer.

Time Out, among other publications, recently wrote up Chicago's first Snow Ice establishment, Cloud 9, which opened this spring. The store offers a variety of flavors for $4 per cup (extra toppings cost 69 cents) and Tasting Table has raved about its sundaes made of "vanilla-flavored ice, chocolate syrup, crushed peanuts and crumbled Heath bars."

Aside from Taiwanese and Singaporean communities, it's online foodies and, apparently, students at DePaul University.

With the right amount of exposure, Snow Ice could be poised to become the next big Pinkberry-style urban dessert trend: It's extremely healthy and low in calories, mildly exotic (like bubble tea), reasonably affordable, and it's easy to take away, so you can eat it on the go. Its relative unknown status also makes it highly appealing to food snobs who can use it to point out how much worldlier they are than their lame ice-cream eating friends.