"The Fabulous Beekman Boys": Can farming cure a midlife crisis?

A gay couple trade New York for the country in a new reality series, but they find more stress than inner peace 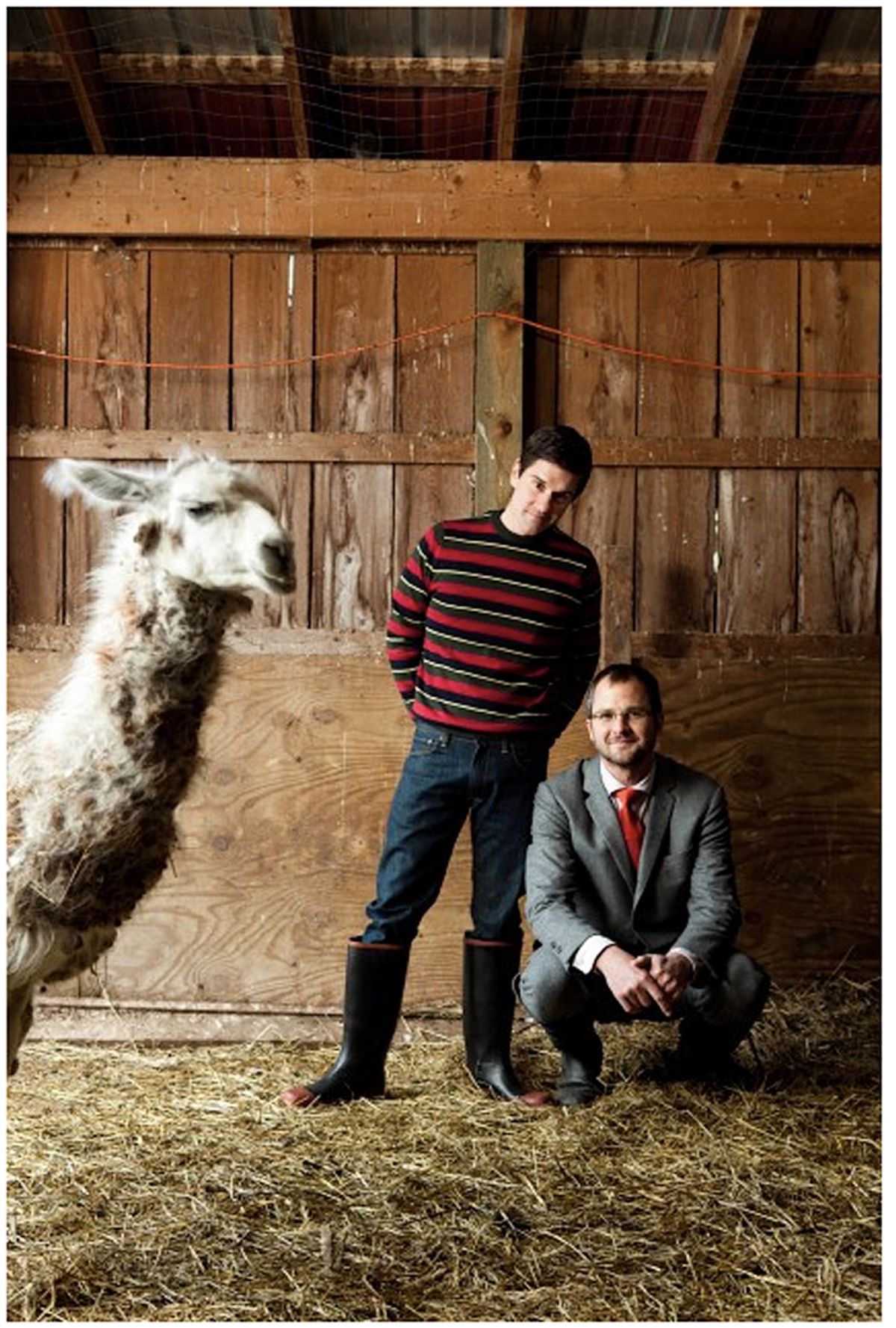 "Why do I waste so much money to live like this?" the urbanite asks as he or she nears middle age. "Can I allow the balance of my days on earth to tick down while I endure this squalid existence, elbowed by strangers, breathing in exhaust?"

A midlife crisis doesn't always mean divorce, younger mates, hotter cars and Botox. In a story as old as the skyscrapers themselves, urban dwellers reach the age of 40 and suddenly grow weary of long work hours followed by chatter over cocktails. A weekend trip to the country trains their imaginations on a new image of themselves, sweetly milking cows and baking bread and cupping baby chicks in their hands. "Wouldn't life feel more wholesome and peaceful on my very own farm, purchased for half of the cost of my New York City apartment?" they ask.

When author E.B. White left Manhattan to live on a farm in Brooklin, Maine, he left behind his job writing the "Notes and Comments" page of the New Yorker and began writing a monthly column for Harper's magazine, many of which were republished in his book "One Man's Meat." Although friends warned White not to muse relentlessly on the idle country life like some privileged bore, White set about documenting the ways his busy, city mind was forced to adjust to a more pastoral setting, sometimes by obsessing about how to build a better barn door, sometimes by fussing about the perpetually askew rugs in the hallway of his farmhouse. As easy as it might be to dismiss rambling treatises on raising cows, White's second-guessing himself, outlining his neurotic tics, and overthinking everything under the sun are precisely what make "One Man's Meat" such a richly satisfying read. White is just the sort of writer who we can't help feeling grateful once suffered from bad allergies (the summer catarrh!) or was filled with dread at the approach of World War II.

The new half-hour reality show "The Fabulous Beekman Boys" (premieres 9 p.m. Wednesday, June 16, on Planet Green) presents us with the modern version of this story: Like White, longtime partners Josh Kilmer-Purcell and Brent Ridge leave their New York City lives behind at middle age to purchase and run the Beekman Farm in Sharon Springs, N.Y. Instead of thoughtfully contemplating this new, slower pace of life, though, Josh sells a book about his new life ("The Bucolic Plague") but keeps his full-time job in the city as an ad exec, and Brent, former V.P. of Healthy Living for Martha Stewart Living Omnimedia, arrives with visions of a Beekman brand that will produce everything from goat cheese to soap to "fine edibles."

And then the filming begins, just in time for Josh to lament that, the second he drives in from the city on the weekends, Brent puts him to work. "This is so not what I envisioned my life being," Josh explains, and we flash to images of his former life as a drag queen named Aqua. "I was famous for having clear plastic breasts that had goldfish swimming around in them," he explains. So how will our former party boy and Omnimedia executive adjust to their new project? Not very smoothly, as you might imagine.

Brent: The tractors aren't lined up.

Brent: It doesn't take any more effort to park the tractors and the other equipment in a nice, orderly fashion.

Josh: (voice-over) He's always been a real type A go-getter, and I'm always the one that just wants to kick back and relax in a hammock.

Josh: There's not, like, parking lines out there in the yard.

Brent: I don't want the barnyard to look like a barnyard.

Josh: Of course not.

E.B. White outlined this preoccupation with seemingly minor tasks as one of the main hazards faced by new farmers. "There will be plenty of them (farmers) who will get sidetracked, probably along the line of some special hobby, hitherto unindulged," White wrote in his essay "The Practical Farmer." But Brent seems sidetracked by several big hobbies at once. Unlike Josh, who doesn't seem to have any drive at all when it comes to hard work and just seems to want a simpler, quieter life, Brent is always fixated on some new challenge. All it takes is a few glimpses of Brent, busily covering a wheel of artisanal cheese with black ash or speaking to a crowd of guests who've come for an event they've organized that he refers to as "Beekmanpalooza," to know that Brent isn't in this for the relaxation. This guy is building a brand.

In other words, while "The Fabulous Beekman Boys" could be encountered as a commentary on the increasingly avid pursuit of respite, of authenticity, of satisfying work by city-dwellers, while it might be deconstructed as yet another search for deeper meaning in the sound of birds chirping and the smell of goat manure, while it might even be taken as a commentary on the twisting of E.B. White's escape from New York into a modern parable on how true escape is impossible as long as you're blogging about it, this show is really just a screwball comedy in which a mismatched couple gripe and bicker and then fall into a big puddle of mud.

Thankfully, though, both Josh and Brent are charming in their own, unique ways (and charming on their blogs, I might add). And if neither of the "boys" appeals to you, there's always their helper, Farmer John, who looks like a big, bulky macho farmer but speaks like a soft-spoken kitten. "The Beekman was a place for me to bring my goats, which are my life," he tells the cameras in tears. "Sorry, my goats are very important to me. Shoot. Um, without Josh and Brett, I would not have been able to keep them. One of my best and worst traits is that I can become very emotional about my animals."

Farmer John and the Beekman Boys themselves -- along with the usual wickedly funny editing by the producers at World of Wonder -- make this show an entertainingly absurd, voyeuristic treat. Because, just as White referred to his own farm as "merely a private zoo" compared to the real self-sustaining farms nearby, the Beekman boys' humility and sense of humor in the face of this daunting new life are their salvation. Like so many other smart overachievers, Josh and Brent might be enamored of farming and animals in theory, Josh may enjoy tooling around in his vegetable garden and Brent might love watching goats giving birth, but on our TV screens, what we mostly see are two people who don't seem all that connected with this gorgeous mansion or to its verdant fields or to the animals that their helper is weeping over. What they are exceedingly good at is embodying the playfully quarrelsome couple -- and how better to promote their brand? In fact, in a moment of meta-midlife-self-branding madness at the end of the first episode, all of these tumultuous factors tumble to center stage as Brent and Josh sweep the porch.

Josh: Why are we cleaning so much? It's not just all the work that we're doing, I don't see you. I'm in the city for five days a week and then I come out here, and I only see you for 48 hours. And then the whole 48 hours all we do is clean or nag. I miss you.

Brent: Well, I don't know how you want me to respond to that, because in my mind, I've already convinced myself that we have to make sacrifices this year.

Josh: I want you to respond like a human!

Brent: Yes, I miss you too, but if we want to get to the point where this farm is self-sufficient, we have to work towards that. Having a country place was your dream, and I feel like I'm the one making sacrifices.

Josh: No, this is what happened. Like everything else, yes, it was my dream, I wanted a nice little country place, but I have a dream and then you take it, and you turn it into this whole production.

Brent: Somewhere along the line you decided you wanted to be up here full-time, and I'm working to try to figure out a way to make that come true.

Josh: No, somewhere along the line you decided to make an empire out of this place.

Brent: How else do you think we're going to afford it?

So there's the answer, for those of you longing to escape your lives of urban squalor. Sometimes, even when you move to a farm in the middle of acres of open, green space, your midlife crisis comes with you -- along with your obsessive type-A behaviors, your ego needs, your financial woes, and your fixation on transforming your entire life into a robust, multitiered global brand. The fact that we're granted access to this friction is what makes "The Fabulous Beekman Boys" so surprising, and so enjoyable.

But even though their cheeses look delicious and the floors to the mansion are spotless, even though the squabbling matches are hysterical and the hurled insults are far too cutting to be faked, there's still something that's a little depressing (and relatable) about the Beekman Boys, poster children for an era of unbearably high expectations. Even when you escape to a simple, picture-perfect life, it's never that simple or that perfect. If you don't want the barnyard to look like a barnyard, you'll never be happy.

Or as White puts it, "When I was a child people simply looked about them and were moderately happy; today they peer beyond the seven seas, bury themselves waist deep in tidings, and by and large what they see and hear makes them unutterably sad."