Why "Top Chef" gets me cooking

The Bravo show isn't just a spectator sport. For me, it offers what a million cookbooks can't: Inspiration 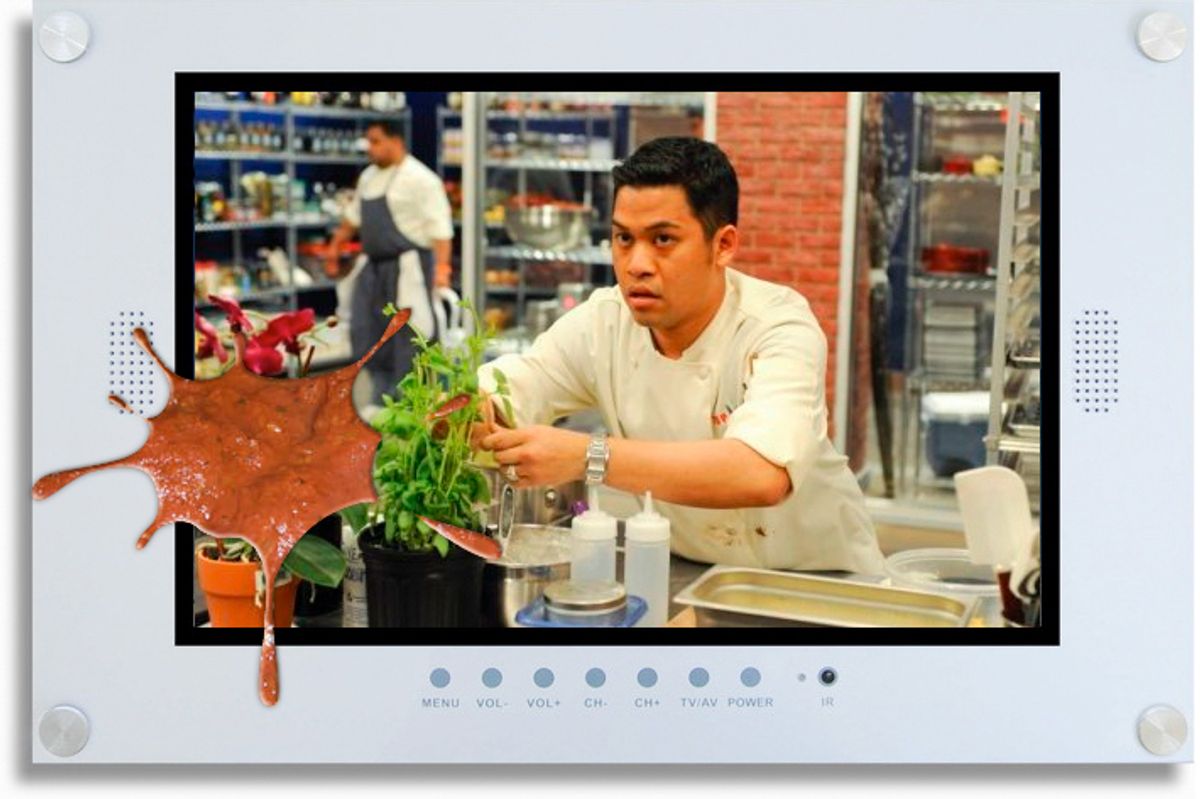 I can hardly wait for tonight's premiere of "Top Chef." Not because I expect the season's seven cheftestants to reprise last year's Shakespearean battle for kitchen supremacy between the fiercely rival Brothers Voltaggio. Not in the vain hope of forming a geek bond with Michigan engineering grad-turned-chef John Somerville like the one I had with losing finalist Kevin Gillespie, who ditched MIT to go to culinary school. Not even for a glimpse of Padma Lakshmi, post baby bump. (Well, maybe a little.)

Why, then, am I literally drooling with anticipation? Because of the way I'll eat afterward. Let me explain.

I will be the first to admit that "Top Chef" is a fundamentally flawed enterprise. Say what you will about "American Idol," but the audience at home can hear Crystal Bowersox caterwauling just as well as Simon Cowell. On "Top Chef," you get to watch frantic knife work, precise plating and maybe a little bickering around the walk-in, but you've got to rely on Judge Tom Colicchio and friends to tell you how the food on those elegant plates tasted. Indeed, the producers at Magical Elves edit the episodes with an eye toward maximum suspense rather than ultimate clarity. Midway through last season Laurine Wickett's pork rillette was likened to cat food by one cranky judge, but she wasn't canned that week, and another contestant was ordered to "pack up your knives and go" (PUYKAG, to faithful viewers). Which is why Colicchio and the other judges devote a substantial portion of their Bravo.com blogs to explaining/defending the outcomes.

To twist an adage often applied to music writing, watching "Top Chef" is a bit like smelling architecture.

In a buzzworthy New York Times magazine piece last summer, food guru Michael Pollan slammed shows like "Top Chef" for turning cooking into a spectator sport. "Today the average American spends a mere 27 minutes a day on food preparation (another four minutes cleaning up); that's less than half the time that we spent cooking and cleaning up when Julia [Child] arrived on our television screens," he argued. "It's also less than half the time it takes to watch a single episode of 'Top Chef' or 'Chopped' or 'The Next Food Network Star.' What this suggests is that a great many Americans are spending considerably more time watching images of cooking on television than they are cooking themselves -- an increasingly archaic activity they will tell you they no longer have the time for."

While Pollan is right about most things foodly, I fear he's missed the mark this time. Like most home chefs, I've got a kitchen full of cookbooks and a growing trove of Internet resources. I don't need instruction, I need inspiration.

And more than anything, watching "Top Chef" gets me hungry. And when I'm hungry, I want to cook. After the cheftestants struggle through a Quickfire Challenge, I'll steal off to the kitchen during a commercial break to whip up a curried aioli. Or a Meyer lemon marinade. Or a pancetta omelet. This watch/cook, watch/cook ritual is repeated week after week, all season long. Contrary to Pollan's thesis, I spend more quality time in the kitchen during "Top Chef" than any other time of the year.

Sometimes the show's inspiration is pretty general. During last season's Restaurant Wars, I filled the fridge with everything from spunky goat cheese crepes to postmodern baked beans enlivened with Guinness and 70 percent Lindt dark chocolate. Other times, it's quite specific, like the time I channeled Mike Voltaggio's audacious -- but ultimately disastrous -- egg concoction. I scratched my head, fondled a fresh free-range egg laid that morning by a spunky, young hen named Clover, and deconstructed it, sunny side up. (Separate the egg, scramble the white curd-free with creme fraiche in the style of Jean-Georges Vongerichten, and top the scrambled white with the lightly poached yolk.)

Therein lies the appeal of "Top Chef." Unlike the contestants on, say, "The Next Food Network Star," who seem chosen largely for their ability to smile and stir at the same time, the men and women vying for supremacy can flat-out cook. Even those sterling regional chefs who inevitably get PUYKAG'd before the finals -- like Ariane Duarte, from my hometown of Montclair, N.J., ushered off midway through Season 6 -- make food that'll challenge your mind as well as your taste buds. And unlike the one-off contestants of "Chopped" and "Iron Chef," or even the competing-for-charity virtuosos of the recently concluded "Top Chef Masters," there's something serious at stake for the cooks of "Top Chef": The juice from winning the title or coming close can make a career, and I know from experience that desperation can be a key ingredient in a successful dish.

Sure, I'd like to see telestratored super slo-mo replays of the knife work. Or a primer on trussing a chicken that goes into half as much detail as this You Tube video on inguinal hernia repair. And I'd like to know more about how the contestants assemble their flavor profiles and less about who's doin' what to/with whom (see the Season 2 hazing of Marcel Vigneron by Cliff Crooks and friends, and the Season 5 dalliance between Leah Cohen and eventual champ Hosea Rosenberg). The food is interesting enough.

There are indications that this season, like last, might offer more of the right kind of heat. Xie Xie's Angelo Sosa has cooked with heavyweights like Jean-Georges and Alain Ducasse, while Ed Cotton of Plein Sud has opened restaurants for Daniel Boulud, and Kevin Sbraga is a protégé of Jose Garces. The fact that snarkmeister Toby Young will be replaced at the judges table by the peerless Eric Ripert of Le Bernadin fame is another hopeful sign.

I know that "Top Chef" is bound to fall back on its reality-show tropes, from simmering feuds between the chefs ("You're not my mother!") to stunt cooking challenges (alligator, anyone?) to episodes that pay lip service to this season's Washington, D.C., location ("Your challenge is to create a truly bi-partisan brunch … using only red and blue foods"). But strip away these made-for-TV trappings and you have a show that does something rather remarkable: It sparks the imagination. So program the DVR, sharpen the Shun santoku, and head into the kitchen to make something that's worth eating. I'm getting hungry already.