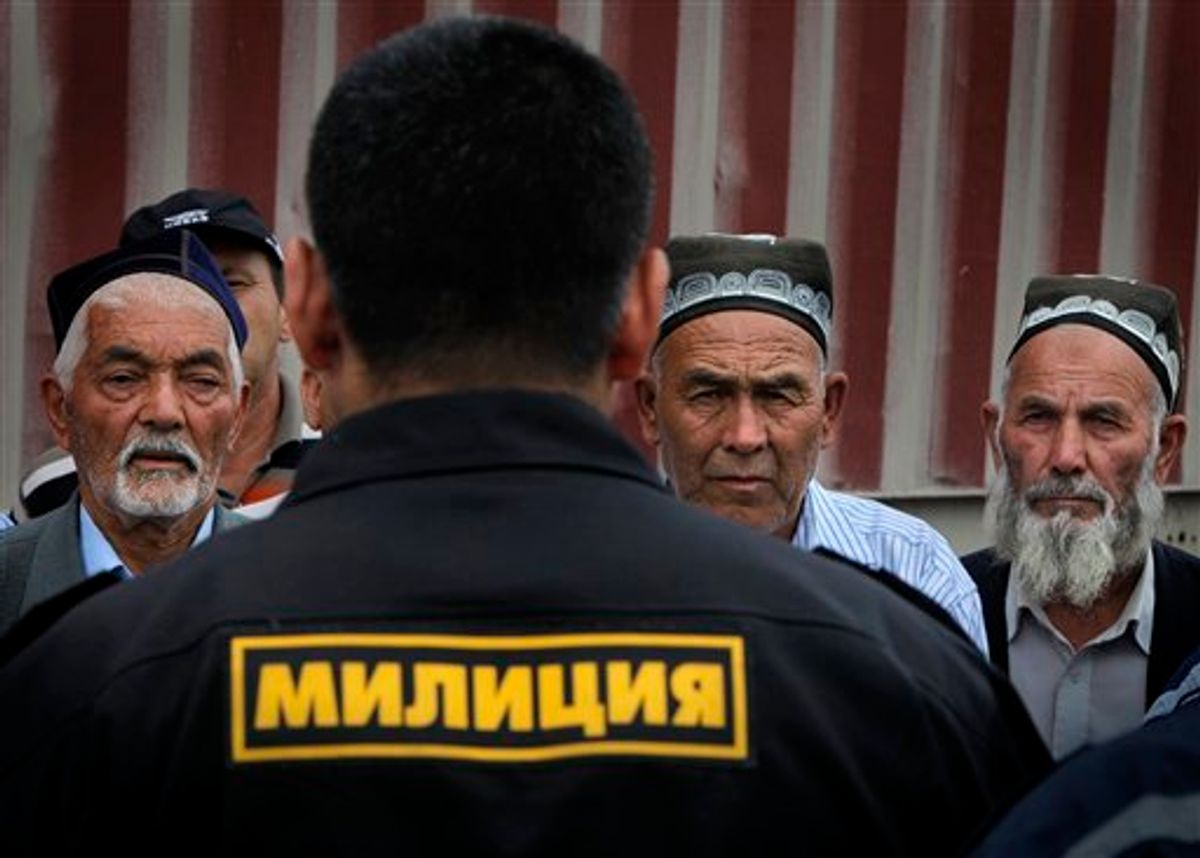 Ethnic Uzbek citizen listen to the head of local police, colonel Kursan Asanov, back to camera, during negotiations with local people in the Uzbek district of the southern Kyrgyz city of Osh, Kyrgyzstan, Thursday, June 17, 2010. Hundreds of thousands of Uzbeks fled their homes seeking refuge in neighboring Uzbekistan after deadly rampages by mobs of ethnic Kyrgyz.(AP Photo/Alexander Zemlianichenko) (AP)
--

Some 400,000 people have been displaced by ethnic violence in southern Kyrgyzstan, the United Nations announced Thursday, dramatically increasing the official estimate of a crisis that has left throngs of desperate, fearful refugees without enough food and water in grim camps along the Uzbek border.

U.N. Humanitarian Office spokeswoman Elisabeth Byrs said an estimated 300,000 people have been driven from their homes but remain inside the nation of 5.3 million people. She said there are now also about 100,000 refugees in neighboring Uzbekistan. The last official estimate of refugees who fled the country was 75,000. No number of internally displaced has been available.

Violence erupted last week between the majority Kyrgyz population and minority ethnic Uzbeks. Kyrgyzstan's government has accused the country's deposed president of igniting long-standing ethnic tensions by sending gunmen in ski masks to shoot members of both groups. The government, which overthrew President Kurmanbek Bakiyev in April, accuses the leader of deep corruption and says that he and his supporters were attempting to shake official control of the south and reassert their control of the Afghan heroin trade in the area.

The deputy chief of the provisional government, Azimbek Beknazarov, said Thursday that authorities had strengthened roadblocks on all entrances into the capital, Bishkek, and tightened security in prisons to prevent Bakiyev's clan from provoking turmoil in the north.

Beknazarov put the official death toll on both sides is 223, but others said the figure could be significantly higher. Many Kyrgyz were killed but the victims appear to have been predominantly Uzbeks, traditional farmers and traders who speak a distinct but separate Turkic language and have traditionally been more prosperous than the Kyrgyz, who come from a nomadic tradition.

Ethnic Uzbeks in camps along the Uzbekistan side of the border told Associated Press reporters Thursday that they were fearful of returning to their homes. Many on the Kyrgyzstan side said they had been prevented from doing so by the authorities, and were awaiting their chance to leave the country for the camps.

A few parts of the south have been all but purged of the ethnic Uzbeks. In other areas, hundreds who hadn't fled have piled up old cars on the streets, barricading themselves into their neighborhoods.

Many of the thousands of refugees to have crossed into Uzbekistan say they are afraid to return to the main regional city of Osh and would have nowhere to live if they did go back.

"My house is not there anymore, it is burnt down, said Khafiza Eiganberdiyeva, 87, who is among 20,000 refugees in a camp set up near Yor Kishlok, three miles (five kilometers) from the Uzbek-Kyrgyz border.

In an Uzbek neighborhood of Osh, a baker who had fled to the border with his wife and five children said his family had lost hope after supplies on the border ran out, and returned out of desperation.

"Is there any difference where to die? There is no food, no water, no humanitarian aid," Melis Kamilov, 36, said against the backdrop of his ruined home.

The Kamilovs fled to the border on Sunday, three days after the rioting began in earnest.

"I am an Uzbek, is that a crime? This is not a Kyrgyz house, this house is mine."

Uzbeks have few representatives in power and have pushed for broader political and cultural rights. While Uzbeks make up only about 15 percent of the overall population, they rival Kyrgyz in numbers in the southern cities of Osh and the nearby town of Jalal-Abad. Both are predominantly Sunni Muslim.

Kyrgyzstan's weak military has been gradually regaining control of Osh, a major transit point for Afghan heroin and the epicenter of the recent violence. Some refugees who deserted Jalal-Abad, which also suffered heavy damage in the rioting, have been stopped from returning there by authorities who set up a checkpoint on the road back into the city.

In Britain, media reports said one of Bakiyev's sons had sought political asylum.

Maxim Bakiyev fled to Britain after Kyrgyz prosecutors put him on a wanted listed for allegedly avoiding almost $80 million in taxes.

The Home Office says the 32-year-old was questioned by officials when he flew into Farnborough Airport near London on a private plane Sunday without the necessary documents to enter the U.K.