The GOP veteran lectured me about the Tea Party's anti-elitism, and I pointed to his investment banking history 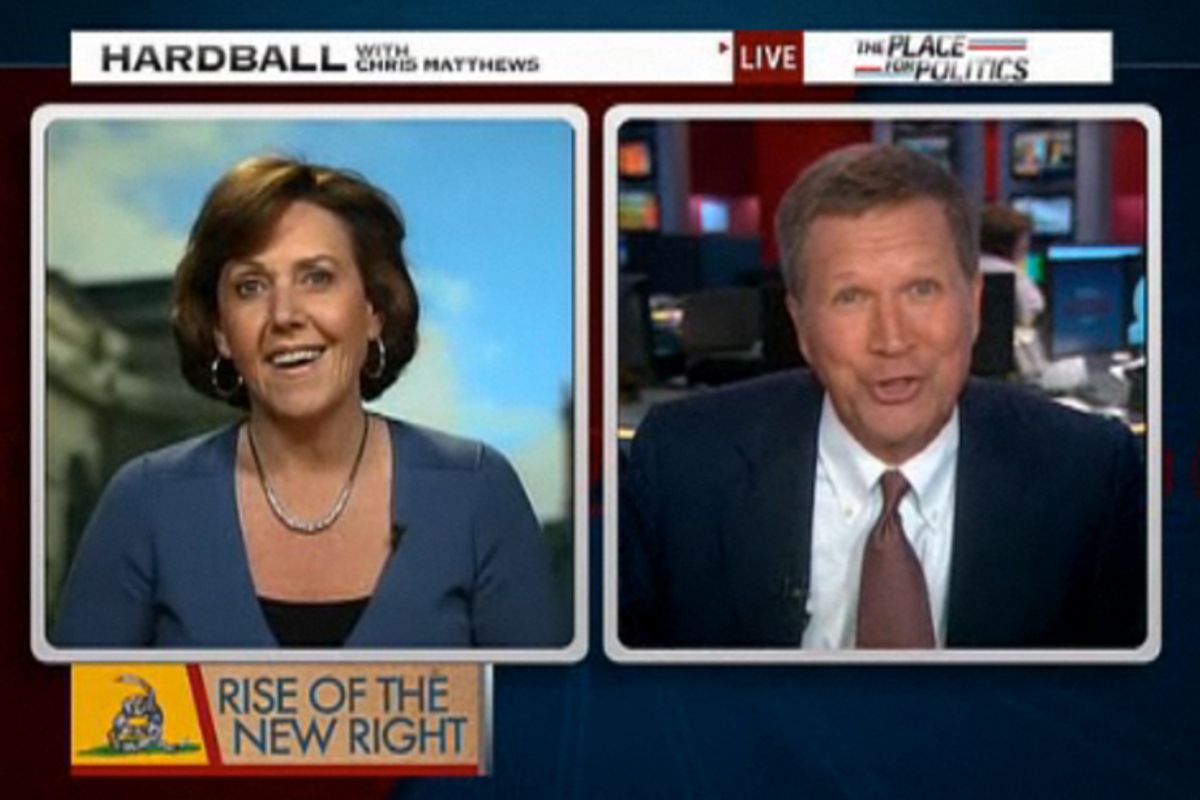 On "Hardball" today former Ohio congressman and GOP gubernatorial candidate John Kasich was hawking his new book as well as his pro-Tea Party politics. By modern standards, Kasich (at least during his House career) might be considered a moderate: He was a fiscal hawk, but he wasn't a demonizer. He voted for President Clinton's assault rifle ban (and he's currently paying for it; the NRA has endorsed Gov. Ted Strickland in the race) and he was even known to collaborate with former Rep. Ron Dellums to cut Pentagon waste.

The 2010 Kasich likes to boast that he was "in the Tea Party before there was a Tea Party," has reversed his stand against assault rifles, and is of course running to his right to try to defeat Strickland. On "Hardball" today, he was disowning the fringe, Birther element of the Tea Partiers and talking up the wholesome anti-tax, small government, energizing strain of the movement. He claimed moderate GOP Sen. Scott Brown as a Tea Party victory, and he didn't like it when I noted that Brown has been running away from the right ever since he got elected. But Kasich got to me when he started talking about the Tea Party's anti-elitism, that they're "blue collar Democrats" worried about the future. This is likewise Pat Buchanan's line, and of course I'm supposed to be the symbol of liberal elitism. So I thought it was fair to point out that Kasich left Congress and went to work at Lehman Brothers Holdings, hardly a bastion of anti-elitism. The video's below.

It's become an issue in Kasich's race for governor, because the Ohio employees pension fund, like many, took a big hit when Lehman collapsed. (The same thing happened in Florida, and will be a big reason why former Lehman guy Jeb Bush might find a comeback difficult.) The Columbus Dispatch reported that Kasich himself pitched Lehman holdings to the pension fund board in 2002, although that conversation didn't directly result in Lehman business. Only today, the Associated Press revealed that a Kasich operative advised a state pension fund executive on how to minimize Lehman's role in the fund's losses when talking to reporters. So Kasich was understandably a little sensitive about the issue, accused me of a "smear" and complained that I was "picking on" him. He also advised me to read his book "so you can learn how to control yourself." Yikes! It's called "Hardball," sir.

Also, in the "things I wish I'd said" department: TPM reported in January that Kasich was warning his fellow Republicans that the Tea Party movement was so angry, they would "hang" Republicans "from the nearest tree" if they didn't endorse their far-right agenda. That doesn't make them sound like the reasonable folks Kasich was describing today. I find it sad that once-reasonable Republicans like Kasich feel they have to court the fringe folks, or else they'll be hanged from trees. Here's hoping they're hanged -- figuratively, of course -- in November.