Performance anxiety at the fertility clinic

Bringing a new life into the world is one of the most joyful human experiences. Producing a sperm sample is not 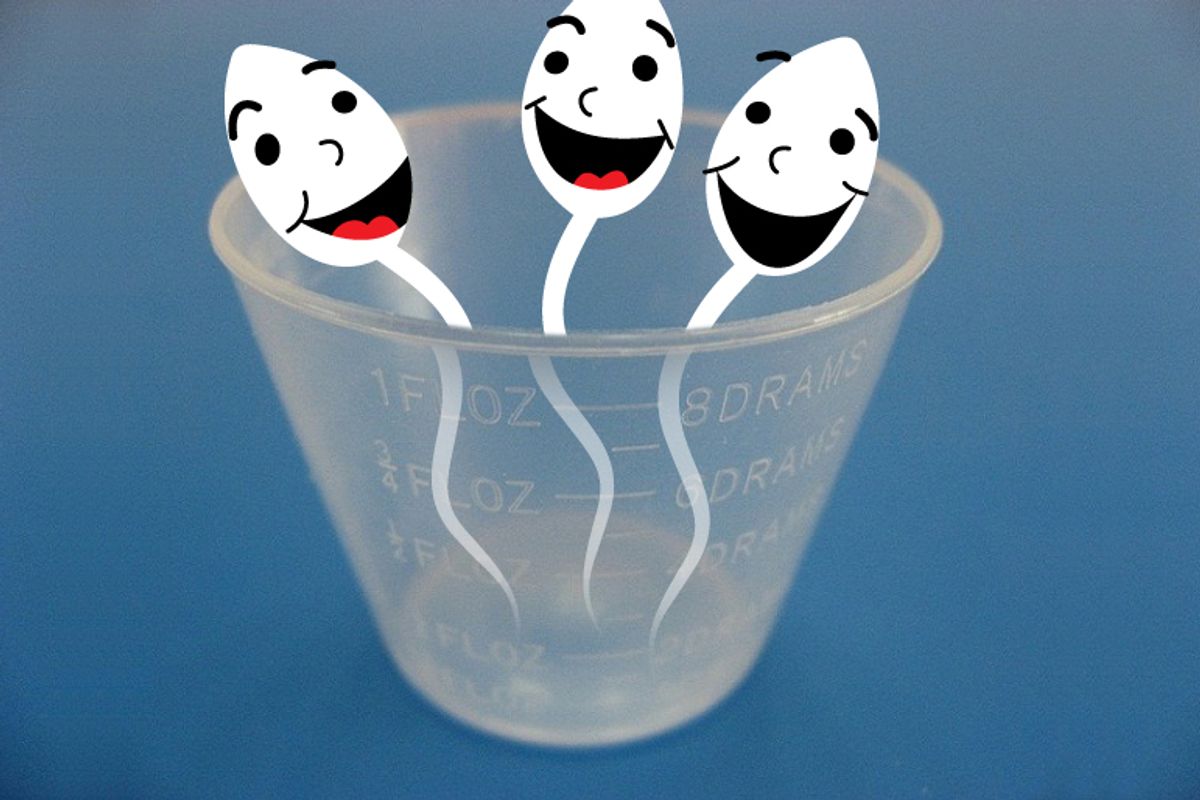 "Good fucks make good babies," Norman Mailer once opined, and I believe it. Around 3.85 billion years ago, life as we know it emerged when a single one-celled organism floating in the primordial ooze cleaved itself and passed along its genetic material to a new organism. Some scientists go so far as to speculate that life on this planet arose as soon as it could, that in its chemical composition, life seemingly wishes to be. To me, the creation of human life -- in which I have once participated successfully -- is the convergence of personality, joy, hope and intention in a reenactment of what is most primal, mysterious, eternal and imperative in this world.

This is one reason it seems strange to be at a fertility clinic very early in the morning waiting for my turn to jerk off into a plastic cup and produce a specimen that, I devoutly hope, will soon impregnate my wife. I want another child. Though my son has done much to prove the "good fucks make good kids" theory, my wife has not been able to conceive again. Working against us are advancing age and intractable self-doubt; even as I sit in this waiting room, I'm nervous. But I want another child. I know it when I watch my son resting on my wife's belly, the two of them luxuriating in one another's love. This, I realize, is what the Old Masters were trying to capture in their countless paintings of Mary holding the infant Jesus -- the most beautiful thing in all creation. I want more of this beauty alive in the world. I want to share again my tiny portion of the spark.

So I wait for my turn to masturbate. I've never had to wait for a turn to jerk off; I've often waited for an opportunity but never a turn, and for some reason this makes me jittery and a bit peevish. I find myself staring at the pages of a book about hip-hop music called "Can't Stop, Won't Stop" and though my reading material seems a tangential detail, be warned that it comes back at a crucial and unpleasant juncture of this story. I'm also finding it difficult to focus on the book because of the strangely unsettling aura hanging over the waiting room, one that becomes more pronounced as the large room fills up with women awaiting treatment, couples awaiting consultation, and stray men awaiting onanism.

My wife, Rachel, and I had visited the clinic for our initial consultation with the fertility specialist a few weeks prior. Though celebrated as one of New York magazine's "Best Doctors" with a wall brimming with awards, the doctor did not fill me with confidence. He was an unctuous Gilbert Gottfried-looking fellow who came across precisely like the type of man capable of using his own seed to impregnate his patients in a mad plan to create a race of superior nebbishes. I really started to get uptight after he told us what we had to do to prepare for the insemination. Around two weeks after my wife's next period, if an ultrasound showed she was ovulating, she was to receive an injection to stimulate egg production. I was to come in to the office the next morning and produce a specimen. I was to refrain from ejaculating for two days before, but not for more than four days.

"Two days?" I said, but judging from the distaste with which the doctor and my wife both looked at me, it might have come out more like: "TWO DAYS?!?!?"

If self-control was what worried me initially, what actually transpired during the next two weeks was a loss of interest in sex that was both utter and unprecedented. I felt like those men in an episode of Nigerian mass hysteria who become convinced that a witch doctor has made their penises disappear. My libido hibernated and was replaced by a gnawing performance anxiety.

"Don't worry, buddy -- you'll be able to pull it off," offered a helpful friend, but when the day arrived, I was anything but confident. I still didn't feel remotely sexual, but more like a single-celled life form floating in the ooze hoping I'd be able to cleave myself.

In the waiting room of the fertility clinic, a gorgeous receptionist calls my name, "Albert S." Her use of my initial makes me feel a little illicit, in a good way. I fix on her hips swaying beneath her loose skirt as she leads me down a cheerless hallway toward the wanking rooms. The moment of truth nearly upon me, my unease intensifies, and I try to redirect my nervous energy by fantasizing about what might happen if the hot receptionist closed the door behind us and purred that she wanted "to help things along."

She snaps me out of my daydream by saying: "Mkasdfj kdsf l jasilupe, if you need it."

I ask her to repeat what she said. "Those cups are for the specimen," she says, pointing, "and the test tubes have lube -- lubrication -- if you need some."

The door shuts and the receptionist is not on the Penthouse Letters side of it. I am alone. The room does not look like a place of joy and fun; it looks like an interrogation chamber -- and I am here to rough up the suspect.

I inch toward the inevitable pile of sad, tattered pornographic magazines and think how their joyless glossy pages are a wellspring from which scores of new human lives have been and will be created. The fact that these magazines remain testifies that a thin pornographic gruel is enough to nourish the libidos of the polyglot parade of self-abusers passing through these rooms.

Well, if this smut worked for everyone, it wasn't working for me. I wash my hands and genitals like instructed by a sign on the wall and mat myself dry with paper towels. Lifting the lid to the trash can, I am confronted with a rubber glove glistening with a lot of lube goop. There is nothing on the sign about having to use a rubber glove. Rubber and schmaltz was a man's erotic choice. Now it feels like I'm in a Times Square peep show booth, with the walls, ceiling, and sawdust-covered floor closing in to crush me. Regroup. Regroup. Suddenly hung like a Ken doll, I start to panic. I look around for a call button, an intercom, an alarm, an ejector seat. Then I notice the DVD player.

I rifle through the selection of DVDs.

"Wham Bam Thank You Ma'am." Nah -- too early in the morning for whamming, bamming or politesse.

"Cuntry in the City." A bracingly witty title, but the flick sounds plot driven. Nix.

"Yo Wife Got Jungle Fever." "We made you, little one, when Daddy was imagining Mommy's date with LeBron James." Nope.

"Suckers 4" is the most politically correct offering, and I give it a try. The opening features a teaser montage of young ladies for whom conversation with the family at Thanksgiving dinner is no doubt quite strained. Then, we meet Vanessa, an attractive brunette in hot pants performing a dance of sexual availability. The screen goes blank, and then kala-BOOSH! Vanessa appears alongside her costar. She doesn't seem too happy about it, nor can I really say that the young man attached to the costar is behaving like a gentleman. But something about it is working for me. I'm watching Vanessa do her thing, and it's working, and I'm happy.

Here is where "Can't Stop, Won't Stop," the book about hip-hop I was reading in the waiting room, returns to the story. On the subway over, I was reading about the Sugar Hill Gang's breakthrough hit, "Rapper's Delight." And as I enjoy "Suckers 4," I realize that Vanessa's bobbing head and my hand are both moving up and down in time to a rhythm, and that rhythm is unmistakably the line from that classic song:

After two weeks of dread and no interest in anything to do with sex, the life force comes on strong, flooding over me with nearly 4 billion years of impetus, reminding me that this is why I am here, to reproduce, and, if necessary, to adopt novel reproductive strategies so that my genetic material is perpetuated, and I can't, I won't, and -- my God, where's the cup?! -- I don't stop.

I laugh as I twist shut the cap of the specimen cup and begin to tidy up. I check the time on my cell phone to see how long the ordeal had actually taken.

After making myself presentable, I bring my specimen, as instructed, to the Andrology Center, a windowless laboratory where three screw-faced middle-aged women work amid dozens of spinning centrifuges of male ejaculate.

"Vhen did you make this?" one of the screw-faces asks in a thick Russian accent.

"Yes, yes. But vhen? Vhat TIME did you make this?" she demands. "Ve have to know exactly the TIME because the DOCTOR can't use it if it's been TOO LONG."

The fertility clinic is an unhappy place. It is a stop on the way to great joy, you would hope, a joy that I am lucky enough to already know -- every day, I kiss my son and love him and dream for him and about him, and because of him I feel supremely confident that the most meaningful part of my existence is ahead of me. No doubt the people in the waiting room also dream of the future, but the dreams must be very different without the little boy. Each visit to this office, each joyless clinical treatment, may be bringing these people closer to the cold clinical moment when the doctor says, finally: "No. Not for you." Could you blame them for not smiling? These people are terrified.

Life wants to be. Once life is, it wishes to endure, and this desire moves everything that lives. Open your eyes and you will see it everywhere, and though there are few places where it is more apparent than the waiting room of the fertility clinic, I failed to see it.

I hurry through the waiting room toward the elevators with my head down, hoping to get out as soon as I can. As I wait for the lift, I scan the unhappy faces. I hope this guy's a good doctor. Please let all of these people get what they want.

Because who cares what the fuck makes good babies, anyway?

Albert Stern's work has appeared in the New York Times and Nerve.com. He lives in Brooklyn, N.Y., with his wife and son.

Albert Stern's work has appeared in the New York Times and Nerve.com. He lives in Brooklyn, NY with his wife and son.