New York considers a bill allowing unilateral splits, and inspires debate over whether it's a feminist move 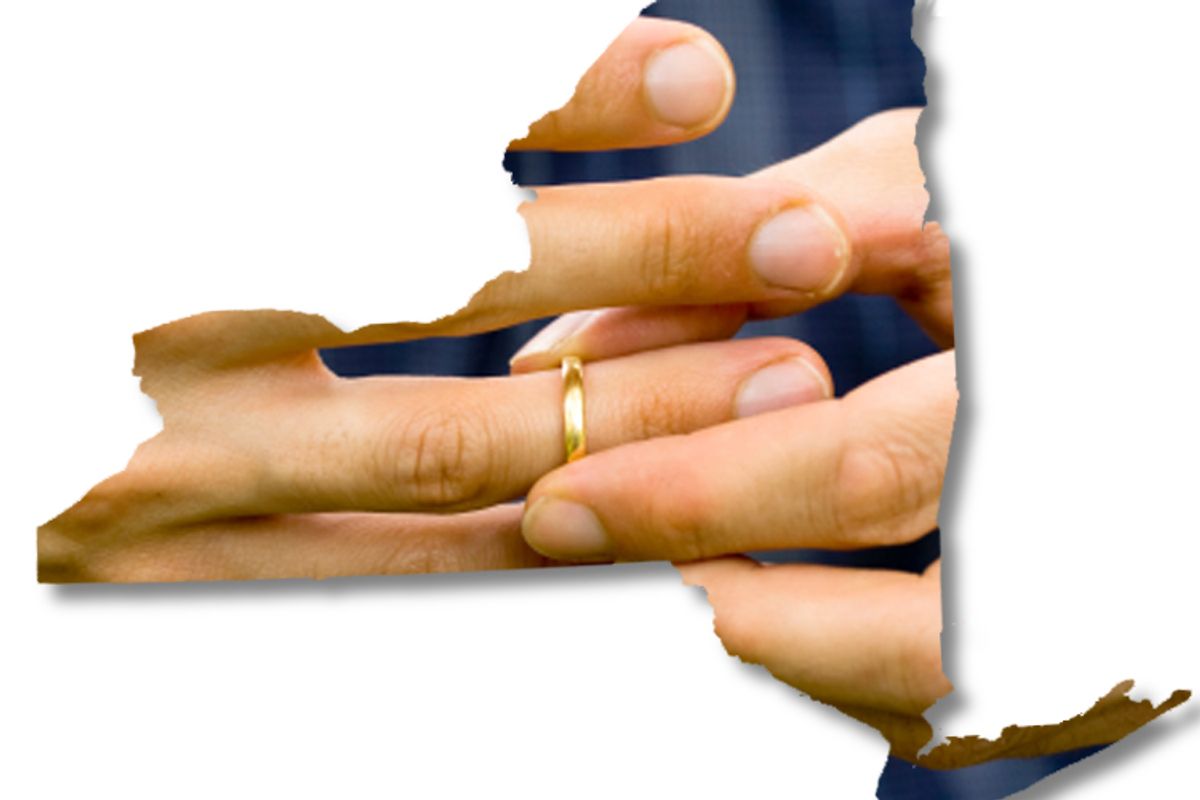 The New York Senate passed legislation approving no-fault divorce on Tuesday night. The bill, which allows for unilateral divorce when a marriage has gone past the point of no return, now moves on to the state Assembly. Am I the only one who's just surprised that New York didn't already have no-fault divorce?

I hear "irreconcilable differences" so often I just assumed it was ubiquitous in the United States. But New York is the only state that still requires proof of wrongdoing from one party for divorce -- and has been the only such state for 25 years. Unsurprisingly, the state’s divorce laws have been labeled antiquated for some time, but there is some outspoken opposition to the update from the Catholic Church, naturally, but also from the state's chapter of the National Organization of Women.

Marcia Pappas, the organization's president, argues in the New York Times, "No-fault takes away any bargaining leverage the non-moneyed spouse has." The non-moneyed spouse is usually the woman, even though housewives and stay-at-home moms aren't as common as they were when unilateral divorce was first introduced. Pappas says that no-fault divorce makes it easier for the moneyed spouse to leave the other spouse destitute.

Betsey Stevenson, an economist at the University of Pennsylvania who has studied divorce extensively, disagrees. The introduction of no-fault divorce benefits women, she says. It leads to a 30 percent decrease in domestic violence. Not only is it easier for the abused to escape their marriages, but potential abusers are also less likely to act because they're aware that their spouses can leave them. No-fault divorce also makes women less likely to commit suicide.

What does Stevenson think about Pappas' claim? Does unilateral divorce favor the spouse holding the purse strings? Not really. "It benefits the spouse who wants out of the marriage the most. That's not always the 'moneyed' spouse. In fact, research suggests that it is more often the wife," she says. Finances are a factor, but there's also expected happiness in life post-divorce, odds of remarriage, and the amount of time the person will get to spend with their children or grandchildren. And while men are more likely to remarry, women are better off by far in custody battles.

Instead of sticking with the state NOW chapter, NOW-NYC supports the new bill. "Women seeking assistance for divorce are the No. 1 helpline call NOW-NYC receives," says executive director Sonia Ossorio. "Every day we see firsthand the devastation caused to women and their families due to New York’s difficult divorce laws. The New York Legislature needs to take this matter seriously and enact reforms that help women, not hurt them."

Despite their differing opinions, there is one thing that Stevenson and Pappas will probably agree on: If the bill passes, there is still more work to be done on divorce law. As Stevenson says, courts need to get better at "making sure that spouses share equally in all investments made during the marriage, including those involving human capital." No-fault divorce may have been a long time coming to New York, but it's not enough.

Now let's get back to same-sex marriage.