An oily wave of GOP pollution

Joe Barton and Michele Bachmann were taking a popular Republican line on the BP fund, until Barton went too far 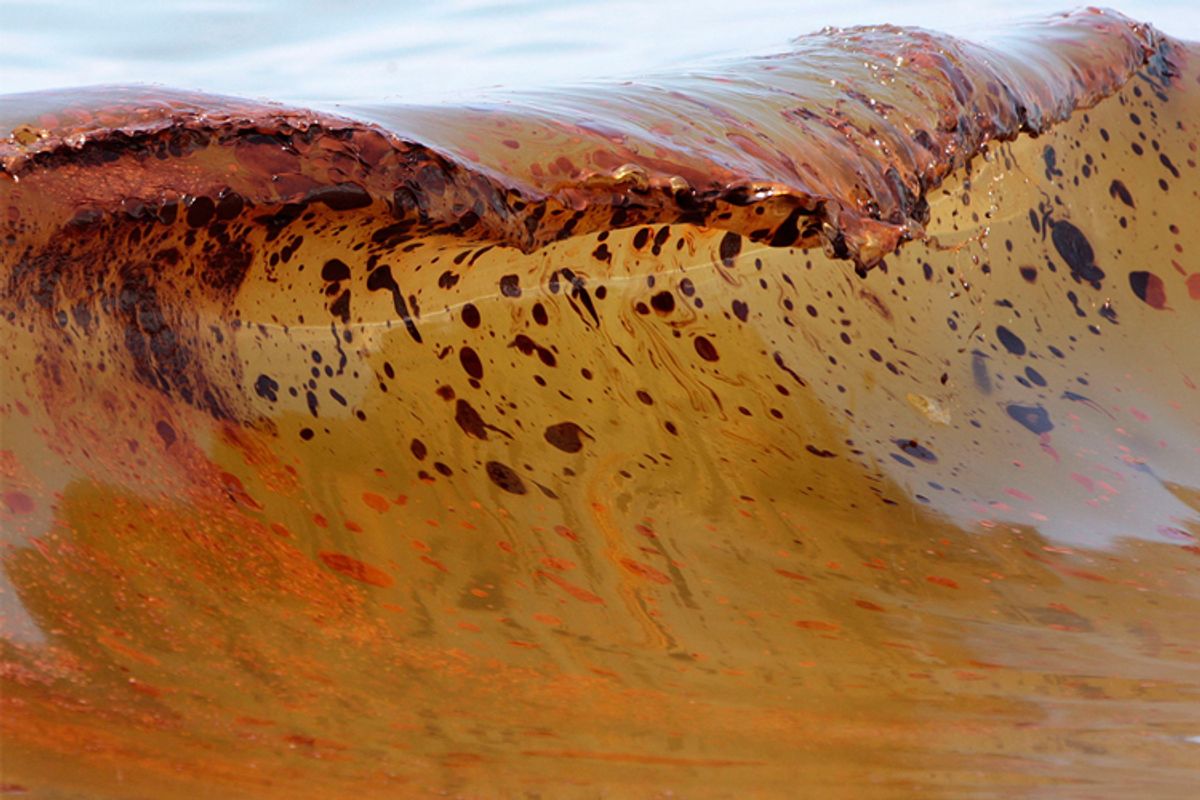 A wave polluted with crude from the Gulf oil spill washes ashore in Orange Beach, Ala., Saturday.
--

Credit where it's due: I was hard on President Obama for his Tuesday night speech, and in hindsight, it certainly felt as though it was missing its point. On Wednesday, what should have been its point was announced. Not only would BP create a $20 billion fund to compensate victims of the disaster -- to be administered by 9/11 victims fund czar Kenneth Feinberg -- but its chairman announced it would suspend its plan to pay dividends to shareholders through the end of the year. The Guardian called the whole plan "Barack Obama's pound of flesh," and even Raging James Carville credited the president for playing tough politics to force the BP action.

Unbelievably, some Republicans are siding with BP, most notably Texas Rep. Joe Barton, who accused Obama of a "shakedown" and apologized to BP CEO Tony Hayward at a hearing this morning. It is probably no surprise that Barton's top corporate donor was partners with BP in the Deepwater Horizon project. The reliably nutty Michele Bachmann, always looking for a way to label Obama a socialist, is calling the fund a "redistribution of wealth" scheme, never mind that it's paying people whose livelihoods were destroyed by BP.

But some Gulf state Republicans have had enough. Rep. Jeff Miller of Pensacola, Fla., demanded that Barton resign from his post as the ranking minority member of the energy and commerce committee. Even Minority Leader John Boehner, who once suggested the government should help BP pay for spill cleanup, quickly distanced himself from Barton. Not long after, Barton apologized for having been "misconstrued."

Nothing was misconstrued, Rep. Barton. As Alex Pareene just reported in War Room, Barton got the shakedown language from the Republican Study Group, a House GOP conservative caucus that specializes in language demonizing Democrats. Barton may have gone too far by apologizing to Hayward, but these were the Republican talking points for today. Politico reports that RSG chair Tom Price blasted the escrow fund in a statement on Wednesday, saying it was "borne out of this administration’s drive for greater power and control." He went on: "In an administration that appears not to respect fundamental American principles, it is important to note that there is no legal authority for the president to compel a private company to set up or contribute to an escrow account."

The Daily Caller is reporting that Barton was told to apologize by GOP leadership, or he'd lose his committee post. But will they chide Tom Price, and rebuke the Republican Study Group? President Obama's best political asset isn't his strategy team or his oratory, it's his bumbling, craven GOP enemies.

Speaking of an oily wave, the Huffington Post compared Hayward's opening statement to Congress with its controversial ad about the oil spill. The overlap is shockingly lazy and unbelievable: