Proposition 8: All about accidental pregnancies?

So say supporters. Meanwhile, the gay marriage trial wraps with a question about the issue's political viability 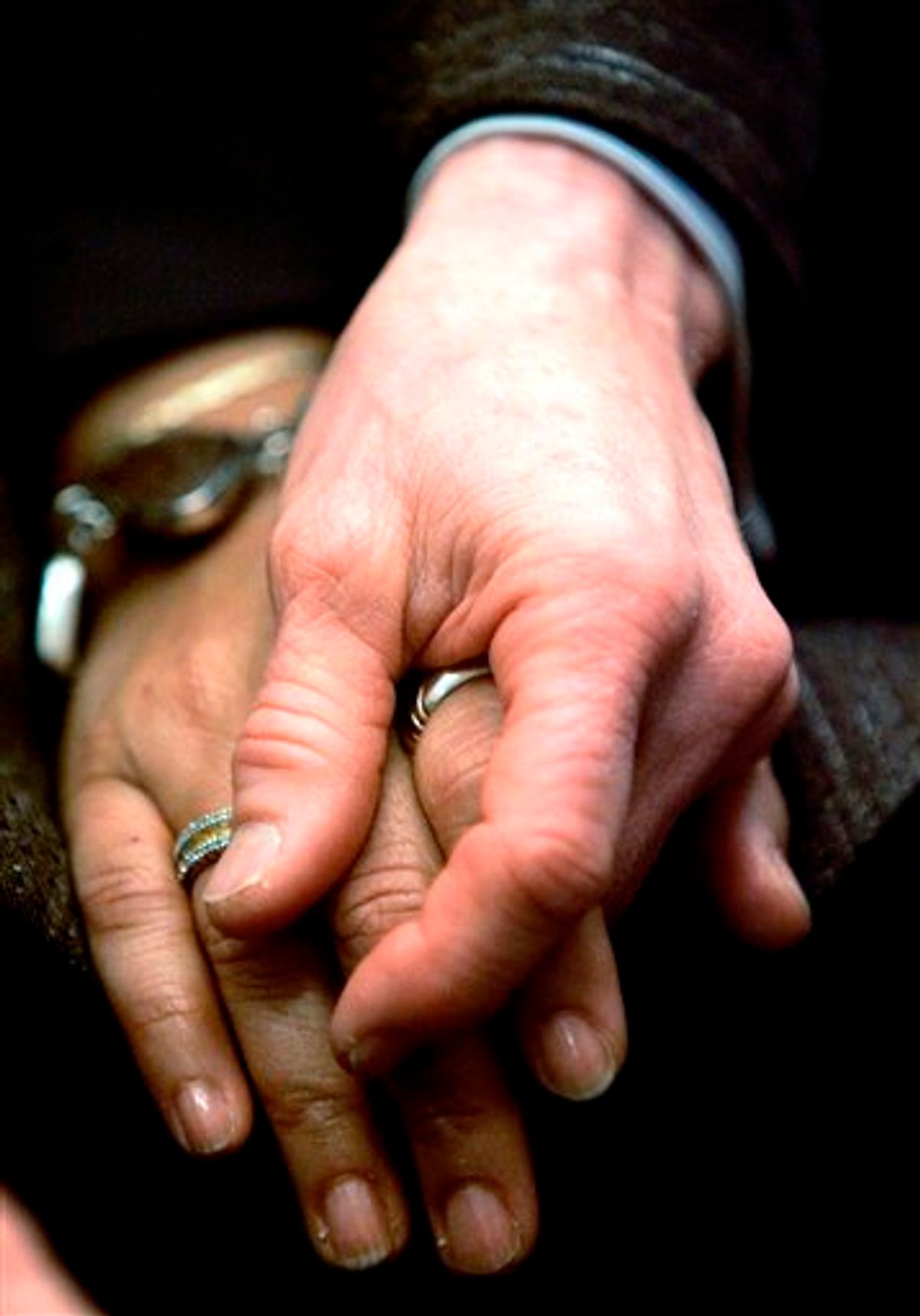 FILE - In this file photo from March 4, 2008, Diane Sabin and her partner Jewelle Gomez hold hands in San Francisco. The lawyers in the landmark federal trial over the constitutionality of California's gay marriage ban may have to check their dazzling oratory at the courtroom door during next week's closing arguments. (AP Photo/Marcio Jose Sanchez, file) (AP)
--

From what I can tell, there's only one argument that Proposition 8 proponents have, which is that only heterosexuals can get accidentally pregnant, so marriage is necessary only for them. It's a strange argument, no doubt, but it is essentially the only quantitative difference between gays and some heterosexuals. I say some because, of course, people who are infertile, past menopause, or who have no intention of reproducing are allowed to get married, so long as their genitals look one way or another. To say that marriage is only about protecting children from being accidentally created is … well … changing the definition of marriage, which is supposedly something these guys are against. Judge Vaugn Walker said it nicely.

Judge Walker asked a series of penetrating questions I found quite impressive. They were the questions I would have asked, only much less snarky. He asked why the chief witness for the Proposition 8 side had said we'd be more American the day we allowed same-sex marriage, he asked why it's OK to take away the rights of a minority when nothing good comes of doing so, he wanted to know why it wasn't gender discrimination if not homosexual discrimination, and he wanted to know if it was appropriate for the court to make a decision still being fought over politically. And of course Mr. Olson was eloquent as always.

What we're talking about here is allowing individuals who have the same impulses, the same drives, the same desires as all of the rest of us, to have a relationship in harmony, stability, and to form a family and a neighborhood, all of those things that the Supreme Court talked about. And, now, tell me how it helps the rest of the citizens of California to keep them out of the club. It doesn't.

These are, undoubtedly, very pretty words. But I actually think the entire decision is going to come down to one exchange between Walker and Olson, and it's not necessarily a terribly pretty one, but it is, I think, the most important. And that is, is it politically viable to send this to the Supreme Court now? Everything else is proven, Proposition 8 is unconstitutional, it's wrong, there's nothing that the proponents have said that holds any water. The only argument holding any water is the one Judge Walker acknowledges, which is that maybe America isn't ready to be the place it promises to be. And there are many pragmatists, old and young, gay and straight who will agree with that, and there are many idealists who are crying and screaming and gnashing their teeth at the thought that politics is ever more important than human decency.

I think Judge Walker is ultimately a pragmatist, but he's got a long view of things, and I think he'll want to be on the right side of history. So, my bet is that he'll rule against the constitutionality of Proposition 8 and do so very conservatively and thoroughly. The real question is whether he'll immediately reinstate gay marriages, and I tend to think he won't. But maybe.