Meg Whitman and her sons seem to think their wealth entitles them to whatever they want, including high office 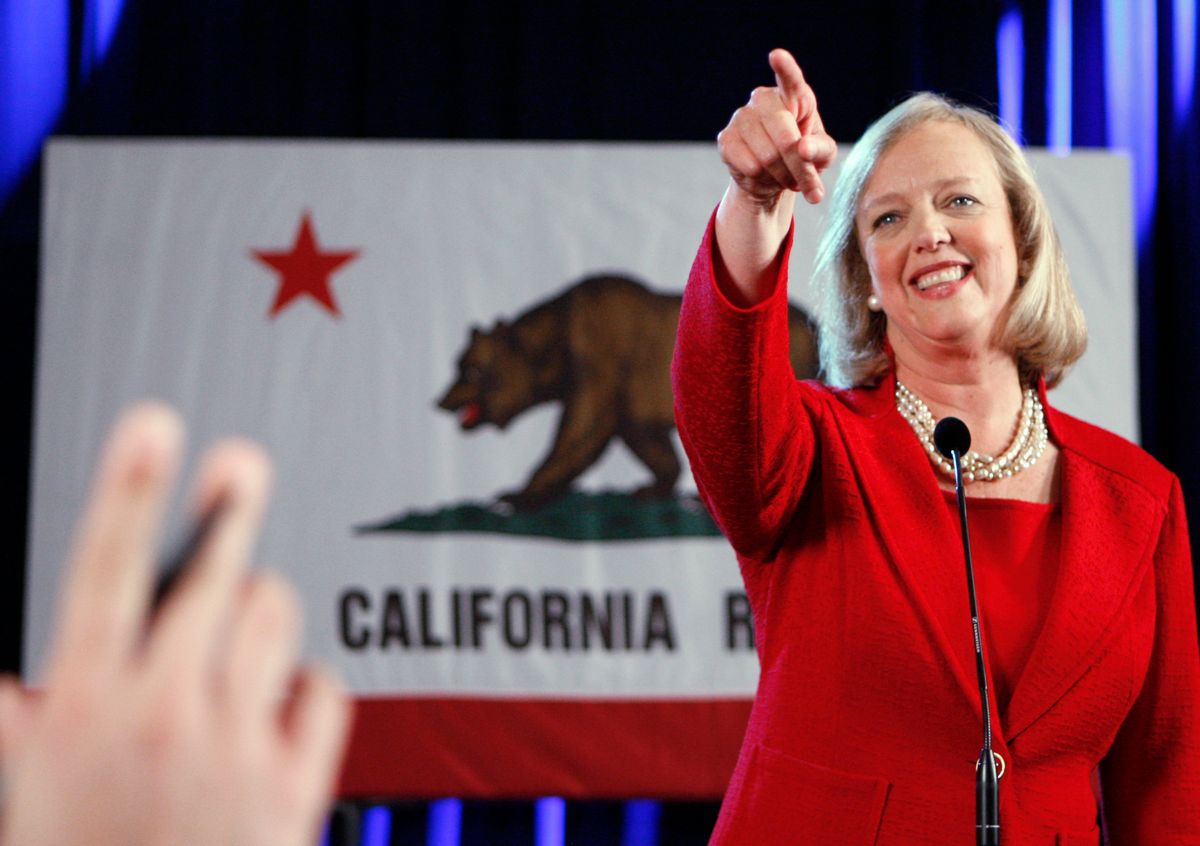 We don't know exactly what's true in the charges that have been flung against various members of Meg Whitman's family, and against the Republican gubernatorial candidate herself. What we do know, however, is that she and each of her sons have been accused of atrocious acts that bear a surprising family resemblance.

The candidate herself has been accused of shoving an employee while she was in charge at eBay. Apparently, a staff member named Young Mi Kim was helping Whitman prepare for an online interview. Whitman seems to have been unhappy with Kim's briefing, and either shoved her, or "physically guided her" out of the room. The resulting lawsuit was settled out of court and included a confidentiality agreement.

As Alex Pareene wrote yesterday, we recently found out that one of Whitman's sons, Griffith Rutherford Harsh V, was arrested in 2006 for battery, after breaking a woman's ankle at a bar in Palo Alto. Harsh, who was 21 at the time, apparently pushed Victoria Sanchez after she knocked off his hat and said, "Fuck your fraternity." Harsh disputed the story, saying she had pushed him and then stumbled, but a security guard corroborated Sanchez's account. Whitman bailed her son out, and charges were eventually dismissed.

Griff Harsh's younger brother Will, meanwhile, was supposedly banned from an eating club at Princeton, where he was a student, for using the n-word. As it's reported, he had already been put on notice for picking a fight with a bouncer, and the racial slur was the last straw.

Obviously, we're relying on hearsay somewhat here, especially in the last case. And is it even appropriate to be talking about Whitman’s children?

I don't feel too guilty about that. Political families are generally taboo subjects because they’re vulnerable without being relevant -- in other words, easy targets for journalistic bloodsport. But the Harsh boys are neither vulnerable nor irrelevant. They're in the news exactly because they've been picking on people who aren’t their own size, and their mother has too.

The Harshes apparently had a reputation for lording it over their fellow Princeton students based on their wealth and their parentage. Whitman is Princeton's most prominent living donor. The university divides up its undergraduates into colleges, of which there were five until recently. The brand-new sixth college was funded with a $30 million gift from Whitman, and is named after her. (The dining hall is called "Community Hall," not for the university community but for the eBay community.)

So, like their mother who got sick of an employee's yapping, the Harshes seem to have thought that they owned the damn place and could do what they pleased. A sense of entitlement doesn't live in the DNA, but it sure seems to have been passed down from mother to sons.

This is important because Whitman’s entire campaign is built around her class privilege. She can’t stop talking about it, though obviously she uses different words to describe it. Whitman is constantly talking about applying her CEO savvy to run California like a business. Her campaign introduced her to voters with TV ads about her time as an executive. "People who worked with Meg Whitman trust her to lead," says one ad. A former colleague testifies, "Meg knew what she was doing." She has an ability, says another, "to figure out what the right thing to do is."

Whitman, in other words, is running on her class position. (And she's spent $91 million so far. She'll almost certainly break the record for self-funding by November.) It's literally the centerpiece of her campaign: as a really rich lady, she has access to secret knowledge about how to fix the broken state government. I see a new campaign slogan: Meg Whitman 2010 -- Putting Californians in Their Place.