Alan Patricof, an investor in the publication, uses it to argue against raising taxes on hedge fund managers 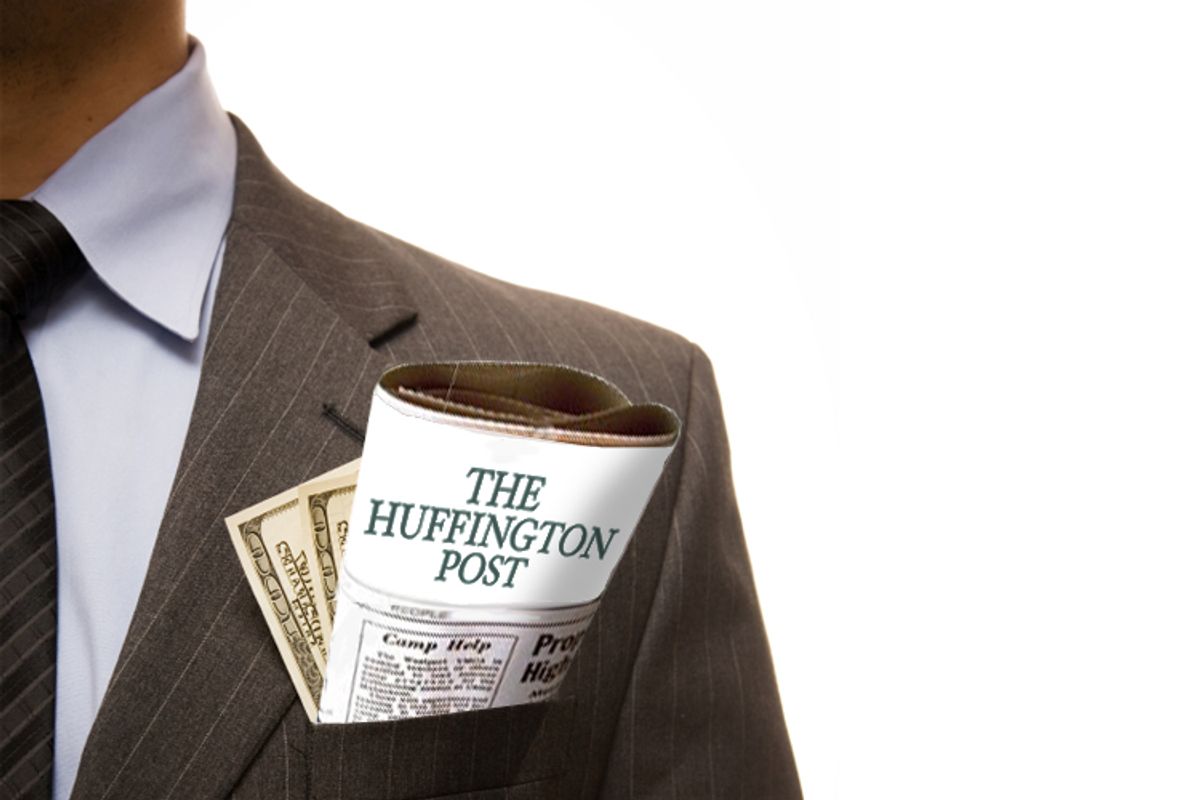 It is never surprising when a hedge fund investor, venture capitalist, or private equity wheeler-dealer warns against the dangers of raising the capital gains tax rate, or otherwise complains that some new tax that disproportionately smacks the wealthy will have baleful consequences. But to see the argument made prominently on the home page of the Huffington Post today was a little off-putting.

No, wait a minute, it's worse than that. Let me put it in different words, the kind of language that Huffington Post columnists have typically been applying to the Obama administration lately: It's a shocking and obscene sellout of the working class to the bloodsucking fat cat leeches of Wall Street!

The post in question, "Unintended Consequences of the Enterprise Value Tax," is by Alan Patricof, described in his Huffington Post bio as "the managing director and founder of Greycroft, LLC, a venture capital firm focused on the digital media sector." But while lambasting the proposed tax as "unprecedented, punitive and [having] no justification in the tax code," Patricof leaves out a few key details.

First, Patricof neglects to mention why Congress is currently debating legislation that includes the Enterprise Value Tax and a closely related new tax on "carried interest." The taxes are the revenue-generating portions of a Senate jobs bill that has been stalled for weeks because of Republican and moderate Democratic opposition. In other words the taxes -- which are targeted at wealthy private investors -- are intended to pay for things like unemployment benefit extensions and aid to states and local governments. Progressives, unsurprisingly, strongly support the taxes.

Second, Patricof doesn't disclose that Greycroft happens to be an investor in the Huffington Post. There's more than a little whiff of impropriety here. During the peak traffic period of Friday morning, while inveighing against a tax that progressives favor, Patricof's post was in the fourth highest position on the home page. Imagine if Timothy Geithner had criticized the "punitive" nature of the enterprise value tax. We'd be talking banner headlines and a photograph of the Treasury secretary Photoshopped with his hands dripping in the blood of the proletariat.

Third, Patricof neglects to mention what tax rate venture capitalists or hedge fund managers or private equity honchos currently pay for income that is considered "capital gains": A paltry 15 percent. During the Clinton administration, the capital gains tax ranged as high as 28 percent. George W. Bush lowered it to 15 percent.

And that's the real key to the story. "Carried interest" refers to the accounting practice governing how fund managers rake in their share of the profits generated by their funds. The Enterprise Value Tax is closely related -- it would kick in, for example, when an investor in a partnership sold his or her shares in that partnership. In both cases, the ensuing income is currently taxed at a 15 percent rate. By any reasonable standard, particularly as compared to the Clinton era, when prosperity was much more widely shared than it is now and governments figured out how to balance their budgets, 15 percent is just too low.

The standard conservative argument, repeated by Patricof, is that lower capital gains taxes are appropriate because they encourage investment. But this is little more than trickle-down, supply-side economics with a fresh coat of paint -- and it's outrageous to see it blasted out of the Huffington Post, a publication that's mighty quick on the draw when it imagines it sees the White House capitulating to Wall Street friendly dogma. The tax structure in this country is way out of whack. People like Patricof should be paying much more than they are now, and they should be happy to do so.