Interim leader: Up to 2,000 dead in Kyrgyz clashes

Up to 1 million may need aid 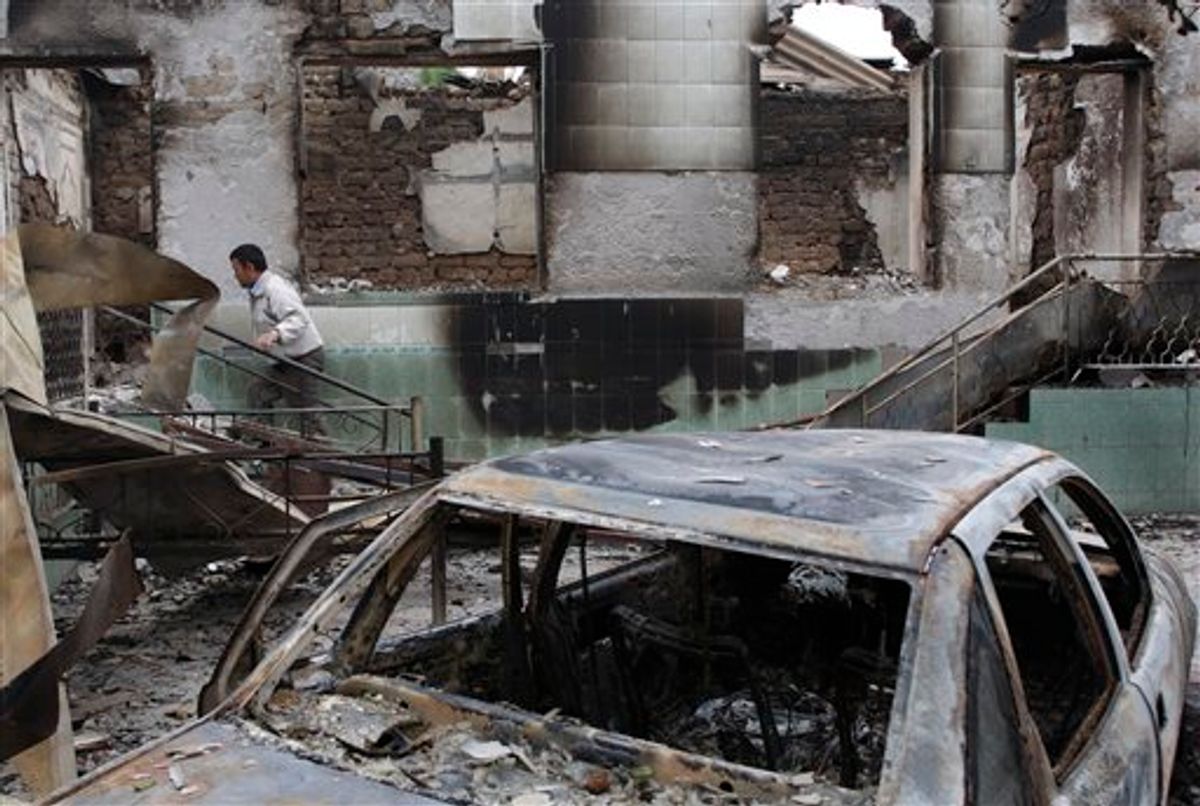 Uzbek man Inamedin Khafizov, 50, inspects his burned house in an Uzbek district in the southern Kyrgyz city of Osh, Thursday, June 17, 2010. Some 400,000 people have been displaced by ethnic violence in southern Kyrgyzstan, the United Nations announced Thursday, dramatically increasing the official estimate of a refugee crisis that has left throngs of desperate, fearful people without enough food and water in grim camps along the Uzbek border. (AP Photo/Sergei Grits) (AP)
--

Kyrgyzstan's interim president said Friday that 2,000 people may have died in the ethnic clashes that have rocked the country's south -- many times her government's official estimate -- as she made her first visit to a riot-hit city since the unrest erupted.

Kyrgyz Health Ministry official figures have put the number of killed in rampages led mainly by ethnic Kyrgyz against Uzbeks at 191.

"I would increase by 10 times the official data on the number of people killed," Interim President Roza Otunbayeva said, according to her spokesman, Farid Niyazov. She said current figures don't take into account those buried before sundown on the day of death in keeping with Muslim tradition, according to the spokesman.

The United Nations said that as many as 1 million people may eventually need aid in Kyrgyzstan and Uzbekistan, including the refugees, internally displaced, host families and others who may suffer from the unrest.

UNICEF spokeswoman Christiane Berthiaume said the figure was an estimate to help aid agencies plan. She says the actual number of people in need may turn out to be higher or lower.

The aid agencies say those uprooted by the unrest most urgently need food, water, medicine and shelter.

The U.N.'s aid airlift into Kyrgyzstan was scheduled to begin this weekend. Two chartered Ilyushin-76 cargo planes carrying 80 tons of relief items are expected to arrive in Osh.

Meanwhile, the sixth flight into Uzbekistan is expected to land at Andijan, Uzbekistan, later Friday, completing the initial load of some 240 tons of relief supplies.

Otunbayeva arrived early Friday by helicopter in the central square of Osh, a city of 250,000 where the violence began last week. Parts of the city have been reduced to rubble by mobs of young Kyrgyz men who burned down Uzbek homes and attacked Uzbek businesses.

The United Nations estimates that 400,000 people fled the country's south.

"We have to give hope that we shall restore the city, return all the refugees and create all the conditions for that," Otunbayeva said.

She said good will between ethnic Kyrgyz and Uzbeks would end hostilities.

Up to 100,000 people have crossed the border into Uzbekistan, where they are getting food and water in camps. Thousands more remain camped in squalid conditions on the Kyrgyz side of the border, unable to cross due to Uzbek restrictions. Over the past few days, Uzbek border guards have placed quilted blankets over barbed wire at the border to allow refugees in Uzbekistan to return.

Migration official Alik Bayboriyev told the AP that there were 31,800 refugees on the Kyrgyz side of the border near Jalal-Abad, a hard-hit town near Osh.

U.S. Assistant Secretary of State Robert Blake, visiting a refugee camp in Uzbekistan about 5 kilometers (3 miles) from the Kyrgyz border, said he was working to ensure the refugees would be able to return home safely.

Blake was swamped by crying refugees, mainly older women and children, complaining they were desperate to return home but too fearful to do so.

"We ... believe there should be an investigation," he said. "We are working with the government of Kyrgyzstan to provide security so you can return home safely."

Blake asked the refugees if they thought the violence had been organized, as the United Nations and Kyrgyz authorities have suggested.

"Yes, of course it was organized, it all happened so unexpectedly," answered one refugee, Nasiba Mamyrdzhanova, from Osh, who wore a traditional Uzbek long-sleeved dress with a bright headscarf.

Blake toured a hospital in the eastern city of Andijan that had taken in 115 wounded refugees, asking doctors about the medical care they were receiving.

In a sign that tensions remain high, hundreds of ethnic Uighurs have fled communities in the capital, Bishkek, after receiving threats that they would be the next targets of violence.

As many as 70,000 Uighurs, a Turkic people with a significant presence in Central Asia and into China's far western regions, live in or near Bishkek. Most have fled for Kazakhstan, where many have relatives, the vice president of the country's Uighur community, Zhamaldin Nasyrov, told the AP.

He said unidentified people have visited the communities in jeeps, writing ominous warnings on houses and fences.

"Instigators who want to sow panic act in these villages," Nasyrov said. "We try to ignore their threats, but we are trying to work out security measures to protect our women and children."

Kyrgyz authorities have said the violence was sparked deliberately by associates of Kurmanbek Bakiyev, the president who was toppled in April. The U.N. has said the unrest appeared orchestrated but has stopped short of assigning blame.

Ethnic Uzbeks on Thursday accused security forces of standing by or helping ethnic-majority Kyrgyz mobs as they slaughtered people and burned neighborhoods. Col. Iskander Ikramov, chief of the Kyrgyz military in the south, rejected allegations of troop involvement but said the army didn't interfere because it was not supposed to play the role of a police force.

"We are all witnesses to the fact that innocent citizens were fired upon from an armored personnel carrier by soldiers in military uniform. I don't know whether they were from the government or some third party, but they only shot at Uzbeks," said Sabir Khaidir, and ethnic Uzbek in Jalal-Abad.

Rakhim Tadjibayev, an ethnic Uzbek whose house was burned down nearby, stepped forlornly around the rubble.

"There's nothing left," said Tadjibayev, who returned Thursday from three days at the border with his family.

The military and police set up roadblocks and began patrols this week after the worst violence was over.

Uzbeks interviewed by Associated Press journalists in Osh said that, on one street alone, ethnic Kyrgyz men sexually assaulted and beat more than 10 Uzbek women and girls, including some pregnant women and children as young as 12.

Members of the Kyrgyz community have denied accusations of brutality and have accused Uzbeks of raping Kyrgyz women. Eyewitnesses and experts say many Kyrgyz were killed in the unrest, but most victims appear to have been Uzbeks, traditional farmers and traders who speak a different Turkic language and have been more prosperous than the Kyrgyz, who come from a nomadic tradition.

More than 1 million Uzbeks who lived in Kyrgyzstan before the crisis had few representatives in power and pushed for broader political and cultural rights. About 800,000 of them lived in the south, rivaling Kyrgyz in numbers in Osh and Jalal-Abad. Both ethnic groups are predominantly Sunni Muslim.