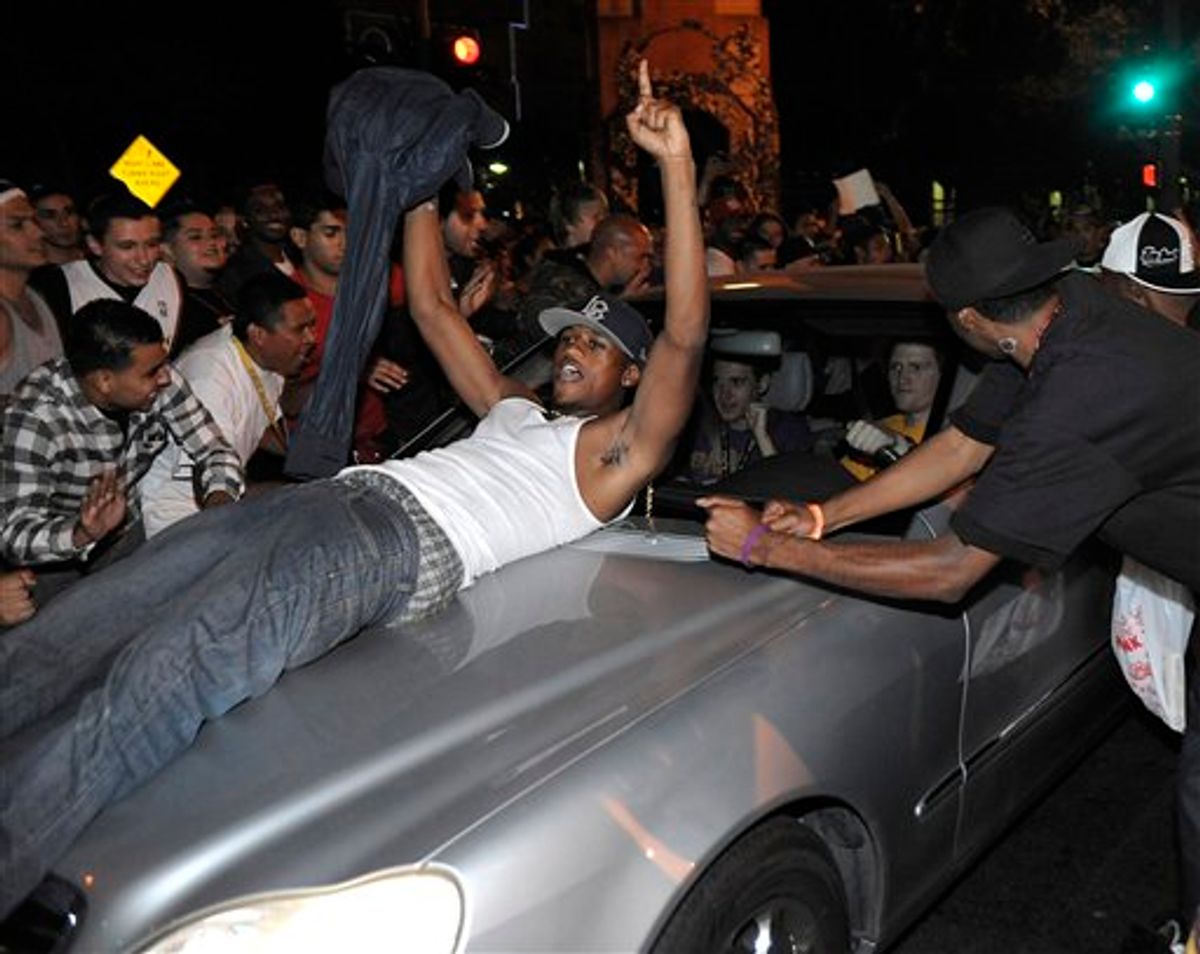 Los Angeles Laker fans celebrate while police try to control a crowd on the street outside the Staples Center in Los Angeles after Game 7 of the NBA finals on Thursday, June 17, 2010. (AP Photo/Dan Steinberg) (AP)
--

A jubilant celebration over the Los Angeles Lakers dramatic win in the NBA championship turned rowdy in scattered sections of the city, with raucous revelers hurling rocks and bottles at officers, setting fires and jumping on vehicles.

Hundreds of police officers massed around the Staples Center before Game 7 of the NBA finals on Thursday night, aiming to prevent a repeat of the violence that accompanied the Lakers' victory last year. But despite their massive presence, scattered pockets of violence erupted in neighborhoods near the arena. No major incidents were reported in the rest of the city, police said.

At least 20 people had been arrested late Thursday and that number was expected to rise, Los Angeles police Lt. John Romero said. Most of the arrests were for public intoxication, while others were for vandalism and inciting a riot.

Television news footage showed several people jumping on a taxi as it attempted to leave the area near the arena after the Lakers beat the Boston Celtics 83-79. Someone opened a rear door of the vehicle, while others rocked it back and forth. The taxi eventually made its way through the crowd and out of the area.

Television footage also showed a man being beaten and a car set on fire. And there were scattered reports of windows being broken at several businesses.

Some men ran shirtless in the street, while other people revved car engines and honked their horns in celebration. Broken glass and burnt debris lined the roads.

Jazmine Rodriguez, 24, lives in an apartment building not far from Staples Center. She said every car on her street had its windows smashed.

"When we came down here, only one window was smashed. The cops told us to go back inside, and they (revelers) smashed the other one," Rodriguez said.

Delmi Ramos tried to salvage what she could from her car, which was filled with shards of broken glass.

"We just wanted to see the celebration and be part of the Lakers' win. We never thought this would happen," she said. "It's these young people who don't know how to behave. They cause damage to people, to the community, because they don't know how to celebrate in a healthy way."

Los Angeles city firefighters responded to 37 incidents within a half-mile radius of Staples Center in a three-hour period following the game, spokesman Brian Humphrey said. There were 15 rubbish fires, one vegetation fire, three vehicle fires and 18 medical aid requests for people ill or injured, Humphrey said. Eight people were transported by ambulance to hospitals. Humphrey didn't know the nature or extent of the injuries, but said some were "quite serious."

One police officer suffered a broken nose after someone threw an object at him, Police Chief Charlie Beck said.

Revelers honked horns and yelled while emergency vehicles and police cars with sirens going moved through the area. Some people set off fireworks.