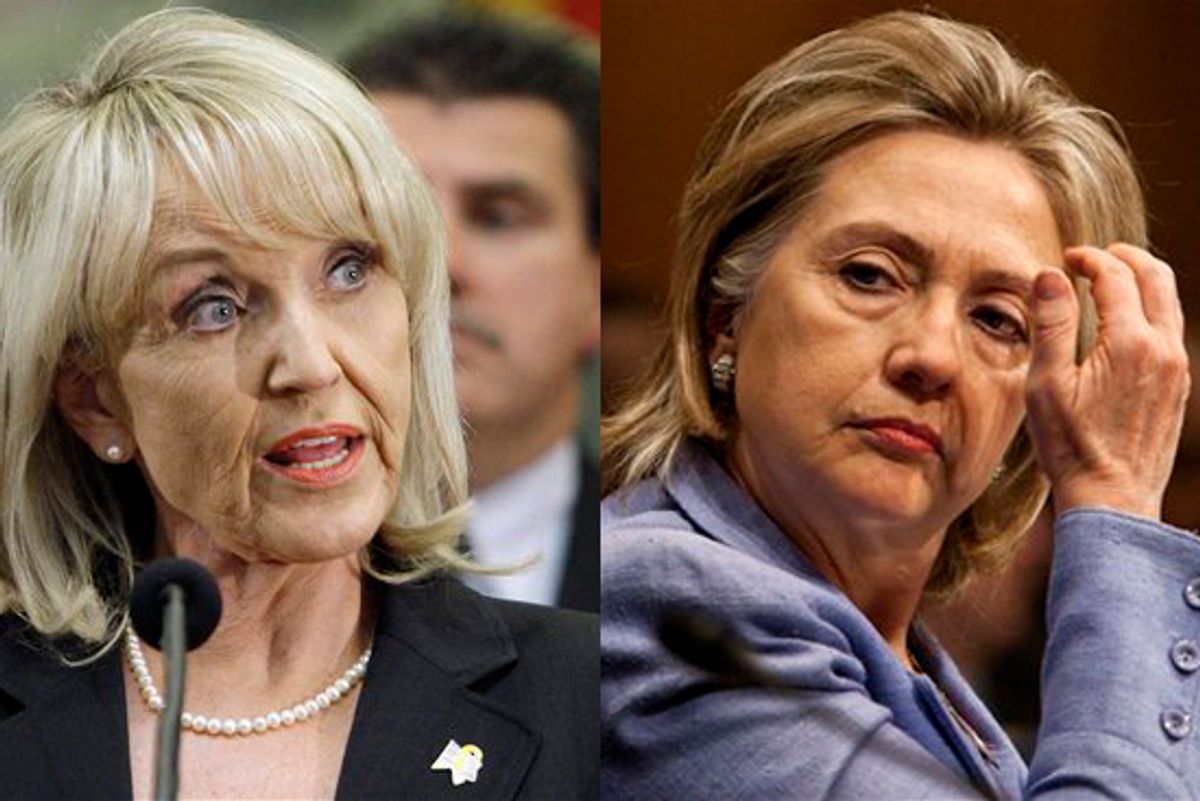 Arizona Gov. Jan Brewer speaks during a news conference after signing immigration bill SB1070 into law Friday, April 23, 2010, in Phoenix. The sweeping measure would make it a crime under state law to be in the country illegally, and would require local law enforcement to question people about their immigration status if there is reason to suspect they are in the country illegally. (AP Photo/Ross D. Franklin) (Ross D. Franklin)
--

Hillary Clinton was apparently correct when she said the Obama Justice Department will challenge the Arizona immigration law, according to CBS news. That will not make Jan Brewer very happy!

The Arizona governor and signer-of-anything-racist was already outraged that at then-unconfirmed plans to challenge her beloved immigration law. The fact that said plans were announced by Secretary of State Hillary Clinton in Ecuador, though, is what really got Brewer's goat:

“To learn of this lawsuit through an Ecuadorean interview with the secretary of state is just outrageous.”

“If our own government intends to sue our state to prevent illegal immigration enforcement, the least it can do is inform us before it informs the citizens of another nation,” Brewer added.

Those damned Ecuadorians do not deserve to know what we do up here! It's a secret!

Now, usually, the Secretary of State does not announce major decisions by the Justice Department to local TV stations in Quito, Ecuador. But apparently that is exactly what Hillary Clinton did:

CLINTON: Well, Andrea, first, let me say how pleased I am that I have this chance to talk to you about these and other important issues. President Obama has spoken out against the law because he thinks that the federal government should be determining immigration policy. And the Justice Department, under his direction, will be bringing a lawsuit against the act.

This was news to everyone. Including, maybe the Justice Department, who yesterday announced that they're still "reviewing" the law, but are not yet pursuing a suit. Some people thought Clinton was just telling a reporter what she wanted to hear.

Mark Krikorian, The Corner's expert in all things Latino, just wrote that Clinton was incorrect and there will not be a suit.

Time for Mark to break out the corrections boilerplate, because "a senior administration official tells CBS News that the federal government will indeed formally challenge the law when Justice Department lawyers are finished building the case."

I can't wait to hear what John McCain will have to say about it. (Demand an immediate airstrike on Ecuador?)