The politics of the World Cup

Why'd Glenn Beck hate soccer even before the U.S. got robbed of a win? An expert explains the game's hidden message 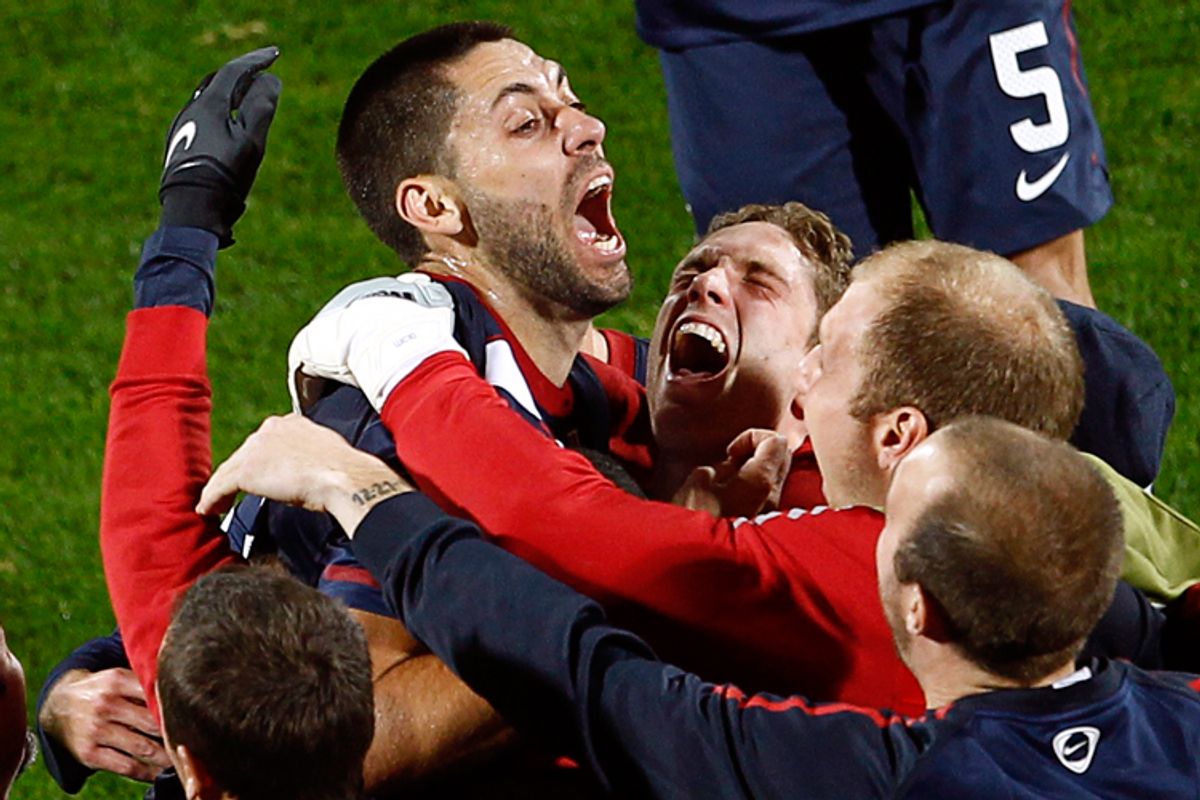 Soccer is a simple game: Twenty-two men kick a ball around for 90 minutes, and the referee always wins. When Malian referee Koman Coulibaly erroneously pulled back a soaring 86th minute goal by American striker Maurice Edu in today’s U.S.-Slovenia match, the move drew instantaneous ire from the supposedly sleepy soccer backwaters of the United States. In a second, a nail-biting comeback from a 2-0 deficit to a 3-2 victory was reduced to the bland territory of a 2-2 tie. But the World Cup, like many things in life, has a curious habit of completely ignoring the laws of fairness. Sometimes a bumbled call, a lucky goal or a tiny blunder is all it takes to change the direction of a game -- and reroute the hopes of an entire nation.

Perhaps the most interesting element of the World Cup is this bizarre shuffle of the global world order that it makes possible. In this space, tiny Senegal can best its former colonizer France, Mexico can roll over France (as it did just yesterday) and Germany can finally score a convincing victory against those damn Brits. With billions watching the tournament and most games decided by a single goal, soccer may just be the world’s most popular and unpredictable political stage.

In his fascinating and intelligent new book, "Soccer Empire: The World Cup and the Future of France," historian Laurent Dubois untangles this often-overlooked linkage in one of the world’s perennial political and soccer powers, France. For an academic, Dubois has a surprisingly strong narrative voice as he sweeps through the country's swashbuckling colonial history to scour the overlapping stories of empire and sport. But the book is more than just a narrative of soccer in France. It is also the tale of how even the most seemingly apolitical institutions in a society can become the battlegrounds for its most pressing questions of identity and ambition -- and give us a really fun game to boot.

Salon talked with Dubois, prior to France's disastrous 2-0 loss to Mexico, about the politics of the World Cup, Glenn Beck’s vendetta against soccer and the infernal racket of the vuvuzela.

First question: Are you annoyed that I’m keeping you from watching this Brazil-North Korea game right now? Or do you secretly have it on in the corner?

No, I actually don’t. I’m being very responsible. It is an interesting match, though, because in 1966 North Korea came to the tournament basically on a fluke and then famously defeated Italy and a bunch of other very strong teams. So it’s possible they’ll defeat Brazil here. You can’t rule it out. [Editor’s note: Close, but no cigar. 2-1 victory to Brazil]

What makes soccer such a good way of looking at the politics of national identity?

In one basic sense, the national team actually becomes the nation in a very visceral and powerful way because the 11 people on the field literally decide if our country is the best in the world. At the same time, when you look at the case of France you see that people may feel like the team is not them, or wonder what it means that these certain people represent them -- especially when it comes to immigrants and marginalized people in the society. So in many cases you have a team of people who are heroes of the nation also at the same time challenging what that nation is and means.

Could you write a similar book about politics in U.S. soccer? Has there ever been a U.S. soccer team with an important political role like the French team has?

I think that story in the U.S. is the story of the women’s team that won the World Cup in 1999 because it represented a political challenge in the sense that the team was insisting on the importance and equality of women’s sports in a country that still wasn’t quite there. They were very much addressing a situation of marginalization and discrimination, and because it was a victory for the whole country it gave the event a big symbolic weight. None of the people on that team necessarily made themselves into political symbols, but they were anyway. Just by playing and being visible, they had to be.

It’s a bit harder with the men’s team, because soccer is so marginal in American sports culture. At the same time, the U.S. team has more than a dozen players with at least one foreign-born parent, and it’s a very diverse squad. So if by some miracle the U.S. won the World Cup you could definitely imagine that team becoming a symbol of our country and the way it looks, and have people asking what that means, just like they have in France.

It’s true that soccer is on the fringe of American sports culture, but at the same time if you drive by any park on any weekend afternoon, you see that Americans do actually play a ton of soccer. So why don't as many people watch the World Cup as watch the Super Bowl?

It’s not that soccer inherently couldn’t be popular in the United States as a spectator sport, but people learn to watch sports -- it’s not some natural behavior. For instance, anybody who doesn’t understand baseball and watches a baseball game is totally lost, because if you don’t know what makes it interesting you don’t understand what the big fuss is all about when these men run around swinging bats. The same thing happens for soccer. People in the U.S. aren’t that familiar with it, especially at the professional level. Just having played or having watched your 6-year old play isn’t necessarily going to provide you with what you need to watch an Ivory Coast-Portugal game and get it.

But it seems that the U.S. reaction to the World Cup is more than just boredom or confusion. Glenn Beck said that he hated the tournament and that Americans should refuse to watch it.

Right. Soccer generates actual hostility in the United States in a way that few other sports do. For instance, people aren’t necessarily familiar with the luge, but when the winter Olympics comes along you don’t get conservative commentators complaining that it exists. But every single World Cup there’s this chorus of comments from the right ridiculing soccer. It would be one thing if there was just indifference -- nobody should have to watch a sport -- but the fact that it creates rage in the mind of someone like Glenn Beck is actually pretty interesting.

I think it has to do with the fact that soccer is a sport that has always been linked to immigrants in this country and at the same time tied to a certain cultural elite. And as we know, there’s a particular strand of American society that sees immigrants and the intellectual elite as dangerous forces. So looking at it that way, it’s not surprising that conservative commentators would fixate on soccer, since they’re obviously fixated on those other two things anyway. It’s an obvious leap -- they feel like the growing popularity of soccer is just further proof of the decline of America.

What does it mean to have the World Cup in Africa for the first time?

It’s a big deal. There’s been a long and vexed relationship between the Confederation of African Football and FIFA. In 1966 the African continent actually boycotted the World Cup because at the time they didn’t even have a single guaranteed spot in the tournament. This World Cup comes from a long history of people pushing FIFA to make Africa a more equal partner in the football world. This tournament is in one sense people making good on those promises of equity.

And at the same time there’s also this complex history of political debate on the soccer field between South Africa and the rest of the continent. African football leaders pioneered the boycotts of South Africa during apartheid. South Africa refused to send integrated teams to the African Cup of Nations and the other teams in the tournament basically kicked them out of it and then FIFA followed suit. Now, 16 years after apartheid ended, that nation has a chance to show the world what they’ve become.

We’ve been getting a lot of Google hits to Salon recently from the search phrase "annoying world cup buzzing." So on that note (or hum), what’s your take on the vuvuzela debate?

I think it’s funny how intense the reaction has been. Yes, I’m sure the vuvuzelas are annoying, but you don’t go to a soccer stadium to have peace and quiet. You could be irritated about almost every form of noisemaking. At some point I think you have to step back and say, you know what, the World Cup is in Africa, they have these horns they like, deal with it. But that’s what’s funny about sports fans, the intensity of the rage they can feel toward something that is by all accounts trivial. In part this is why debates, political or otherwise, around soccer can be so powerful -- in the end there’s no empirical way to resolve them. Was the Mexico-South Africa game really good or really boring? Are these horns too loud? I don’t know, and no one else does either. But we’ll all keep asking.

You’re headed to South Africa in a couple weeks. Will you be a horn blower or an earplug wearer?

I don’t think I’ll wear earplugs or blow the horn. I’ll be neutral.

Ryan Brown is an editorial fellow at Salon. You can follow Laurent Dubois' continuing World Cup commentary on Twitter or via his blog, Soccer Politics.