War for resources: From slander to clarion call

Suddenly, the Pentagon wants us to know about all the resources the U.S. can acquire by invading countries 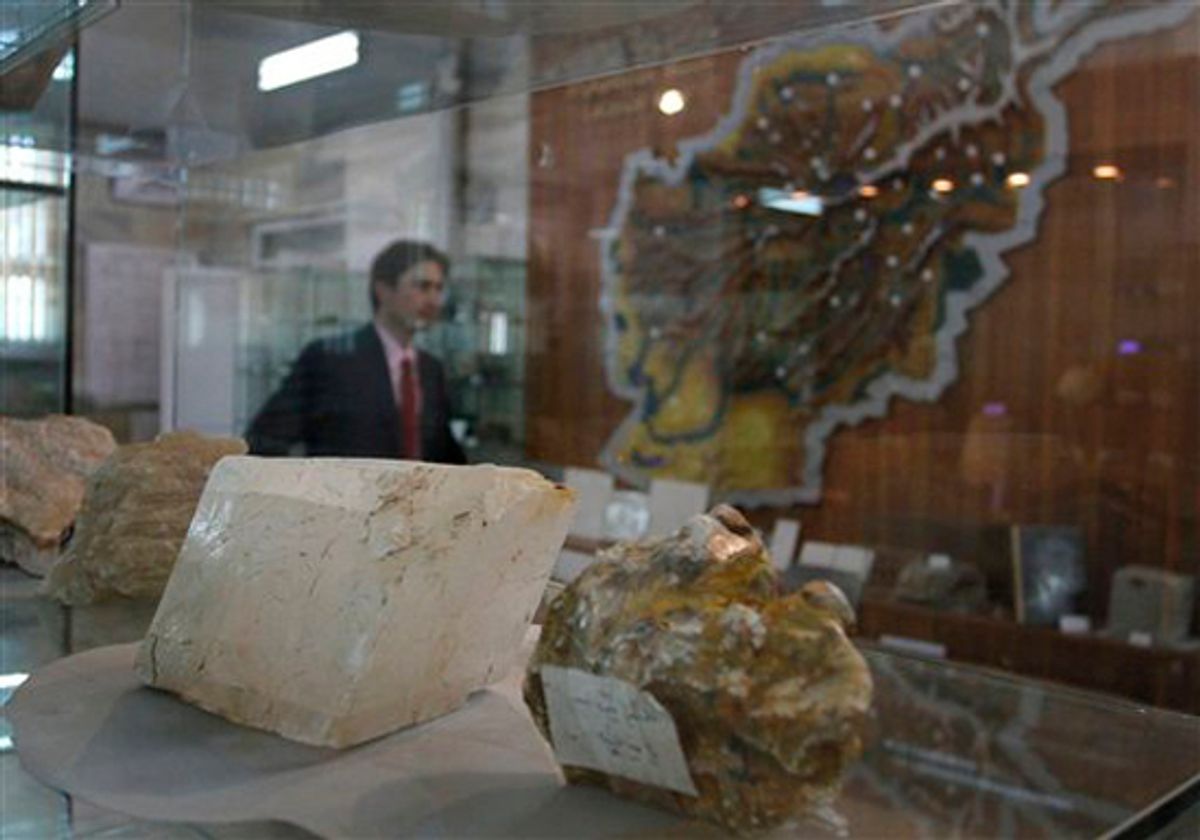 An Afghan journalist walks by precious stones on display as he attends a press conference of Afghan Minister of Mines Wahidullah Shahrani in Kabul, Afghanistan on Thursday, June 17, 2010. An Afghan mining official says the untapped minerals in the war-torn country are worth at least $3 trillion, triple a U.S. estimate. (AP Photo/Musadeq Sadeq) (Musadeq Sadeq)
--

Reading this week's New York Times headline — "U.S. Identifies Vast Riches of Minerals in Afghanistan" — many probably wondered why this information was being presented as "news" in 2010. After all, humanity has long been aware of the country's vast natural resources. As Mother Jones magazine's James Ridgeway said after recalling previous public accounts of the ore deposits, "This 'discovery' in fact is ancient history tracing back to the times of Marco Polo."

The intrigue in the Times' dispatch, then, is not Afghanistan's "huge veins of iron, copper, cobalt, gold and critical industrial metals" that the paper quotes Pentagon officials gushing about — it is the gushing itself. Indeed, the real question is: What would prompt the government to portray well-known geology as some sort of blockbuster revelation?

The Atlantic's Marc Ambinder proffers a convincing answer. Noting the military's coordinated quotes in the Times piece, he writes that the Pentagon is probably trying to bolster Americans' support for the flagging Afghanistan campaign by "publicizing or re-publicizing valid but already public information about the region's potential wealth."

This assertion, mind you, is not coming from some antiwar ideologue in a "No War for Oil!" T-shirt. On the contrary, Ambinder is a quintessential buttoned-down establishmentarian far more interested in covering political process than in pushing a pet cause — which means his charge (later echoed by other Washington journalists) is a particularly powerful one. And if he's correct, we may be witnessing the final spasm of a radical shift.

The accusation that the U.S. invades countries to pilfer their natural resources was once written off as an inflammatory insult or an unsubstantiated conspiracy theory, irrespective of corroborating facts (like, say, pre-9/11 Pentagon plans to divvy up Iraqi petroleum, State Department proposals to privatize Iraq's oil fields, and top government officials insisting that Saddam Hussein's overthrow was "essential" to protect oil supplies). The assumption, of course, was that the public opposed resource conflicts and that therefore labeling wars as such was nothing but disreputable slander designed only to harm a political opponent.

This manufactured construct, though, began eroding as soon as George W. Bush started turning the "war for oil" aspersion into a proud clarion call.

In 2005, the Associated Press reported that the president "answered growing antiwar protests with a fresh reason for U.S. troops to continue fighting in Iraq: protection of the country's vast oil fields." During a press conference a year later, Bush three times pitched petroleum as a rationale for war, criticizing "extreme elements" who "want to control oil resources," insisting that "we can't tolerate a new terrorist state in the heart of the Middle East with large oil reserves" and warning that we must stop insurgents from gaining "the capacity to use oil as an economic weapon."

Now, under President Barack Obama, we get leaked Pentagon memos cheerily promising that Afghanistan will become "the Saudi Arabia of lithium" and generals touting the minerals' "stunning potential" — the implication being that America is morally obligated to exploit such potential through armed occupation.

The theater of battle is different, but the paradigm is the same: Whereas it was previously considered uncouth for anyone to even suggest that economic hegemony might motivate U.S. military action, our leaders are now boldly selling wars as commendable instruments of such profit-focused imperialism.

Importantly, this revised message relies on the new assumption that the public now sees resource conflicts not as detestable, but as worthy and even admirable. And should that assumption prove true, it would mean that this latest exercise in martial propaganda represents more than mere marketing innovation. It would signal a disturbing change in what the population thinks is — and is not — a just reason for war.