This Mac devotee is moving to Linux 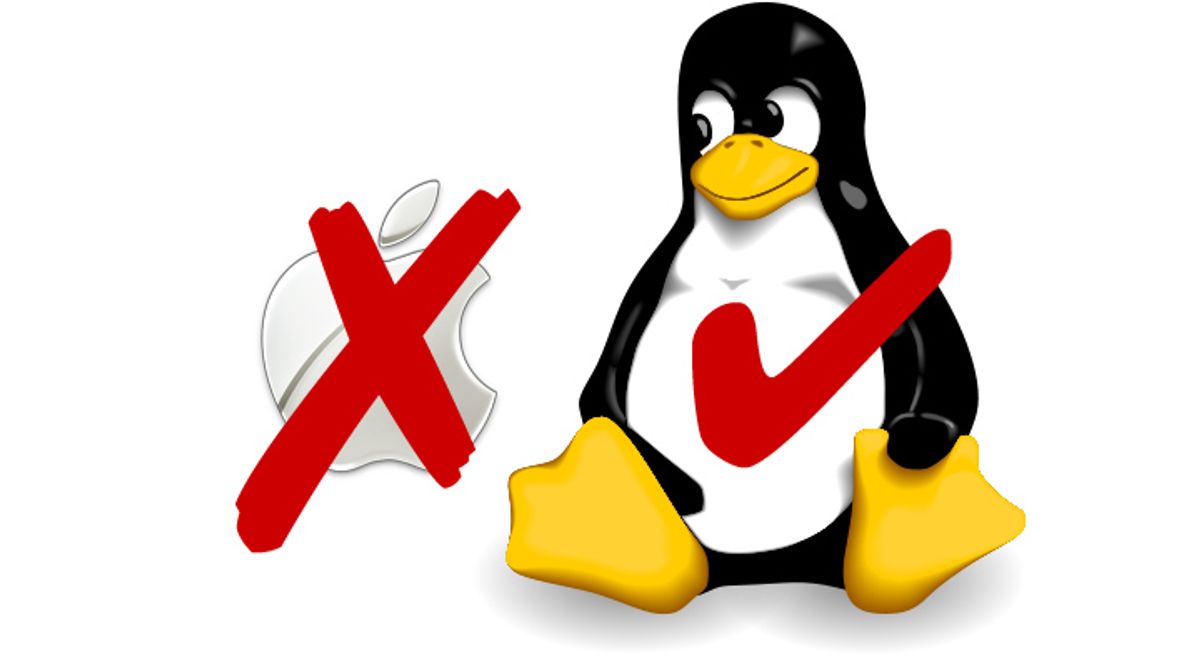 I'm not religious about technology. My strategy is to use what works best, period.

This is why, for more than a decade, I've been using a Mac as my primary computer (and had been using Macs for some of my work long before that). Apple's personal computers continue to be the best combination of hardware and software on the market today.

So why am I about to migrate to Linux (aka GNU/Linux)? Because Apple is pushing me away, and because I value some principles, perhaps almost religiously, that affect other decisions.

Apple is pushing computer users as fast as it can toward a centrally controlled computing ecosystem where it makes all the decisions about what native applications may be used on the devices it sells -- and takes a cut of every dollar that is spent inside that ecosystem. This is a direct repudiation of its own history, and more broadly that of the larger personal-computing ecosystem, where no one can stop anyone else from writing and distributing software that other people might want to use.

Steve Jobs says Apple is a curator, nothing more. This grossly understates the control. Jobs says Apple has "made mistakes" in being the police, judge, jury and executioner in its Disney-style world, and is working hard to perfect the system.

But this is a disconnect with reality. Central control, no matter how well-intentioned, is itself the problem, not the solution. The "enlightened dictator" is fiction. And dangerous.

I realize that I won't persuade the many people who prefer to live in gated communities, believing they can leave any time they wish. But switching costs will only get higher over time for those who choose to live in the Apple ecosystem.

As noted, I've been happy in the relatively free Mac world. But given the slowing pace of Mac OS development, there's reason to believe Apple is mostly milking Mac OS users. Will it phase out serious PC development? Or will it eventually move its command-and-control methods up the value chain to the Mac? Apple says it's committed to the Mac's future. I'm not so sure, especially after Jobs, speaking at the Wall Street Journal's All Things Digital conference earlier this month, made it clear that he believes the iPhone/iPad ecosystem is the real future of personal computing, with PCs becoming a much smaller player. (I'm a believer in tablets, and am planning to put my money there on the Android OS when tablet manufacturers adopt it in tablet-sized formats.)

So I'm looking for options in the personal-computing part of my life. Windows is one, of course, and Windows 7 is a truly fine piece of work by Microsoft's recent operating-system standards, leagues better than Vista. But it's impossible to fully trust Microsoft given its own history, not least its long and ever-deepening alliance with the control freaks of the Copyright Cartel, the commercial music, video, software and publishing industries.

That leaves, for practical purposes, Linux, which is freely available and not controlled by any one company. Volunteers around the world, who value freedom of choice and the ability to modify what they use, have created an ecosystem of their own -- software based on the concept that you, not Steve Jobs or Steve Ballmer, should have control over what you own.

Linux is anything but a walled garden. It's almost nothing but choice, with all the good and bad that comes with it. Linux comes in all kinds of flavors. For now, I've settled on Ubuntu as the OS most likely to be in my own future. The Ubuntu project, founded by Mark Shuttleworth, appeals to me for many reasons, not least the project team's devotion to making the software easy to use.

Linux runs on many kinds of PCs. The Mac may be a wonderful combination of hardware and software, but the hardware is definitely lagging these days. I've purchased a Lenovo ThinkPad X201, a laptop that strikes me as the ideal balance of portability and power. It's much lighter than my MacBook Pro, yet has a great set of hardware features that Apple can't seem to provide in its own laptops despite their high prices. (Example: The ThinkPad has a reader for flash-memory cards.)

Unfortunately, Ubuntu's latest version, called "Lucid Lynx," won't run properly yet on the X201. The machine is just too new, and has some hardware Ubuntu doesn't yet support. I'm assured this will change in the relatively near future, but Ubuntu's lack of support for such a popular computer is an example of how much progress the project, for all its immense value, needs to make.

Meanwhile, Lucid Lynx is running nicely in a "virtual machine" on my MacBook Pro. I've been testing a variety of applications that could replace the Mac software I've come to rely on, though in some cases I can't easily find adequate replacements (such as the blog-posting software I'm using to create this post).

I'm planning to make this transition slow and systematic. And I'll be blogging periodically about the process. These postings won't be aimed at geeky folks, but rather at others like me who believe in true freedom of choice in a world where powerful institutions are trying to lure us -- or force us -- into their walled gardens.