Is cheerleading a sport? 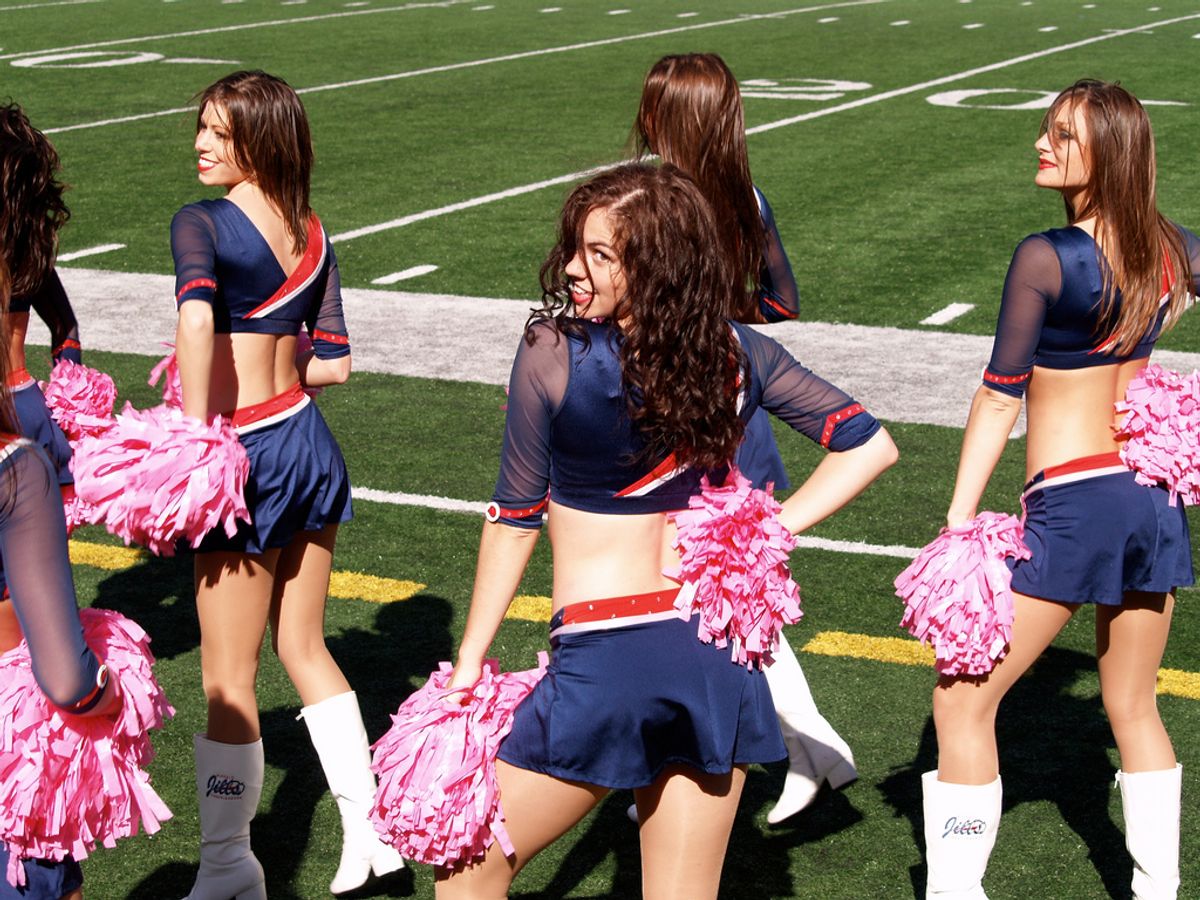 In a trial that kicks off today, a federal court in Connecticut is taking on the question of whether competitive cheerleading is a sport. The case appears to be the first that asks if Title IX standards for gender equity in sports can be met with high-kicks and pom poms.

Five women and a coach from Connecticut's Qunnipiac University's volleyball team are pushing the point in a lawsuit they filed after the school cut their sport -- favoring instead to host a competitive cheer team, which it can field at less cost for more team members. The university contends that this is a legitimate way to meet the standards of Title IX, the federal law that requires equal opportunities for men and women in school athletic programs. But critics argue that the move cuts a team with legitimate student interest in favor of one that has no national precedent as an actual sport -- all as a cheap way to inflate Title IX numbers that Quinnipiac must report to the federal government.

And speaking of those numbers, Quinnipiac has been hardly upfront with them; in fact, it's been downright manipulative. In a guise of equity, the school has over-reported opportunities for female athletes, and under-reported opportunities for men, according to the Associated Press. Quinnipiac had the unfortunate habit of dropping players from the men's baseball and lacrosse team just before it filed data with the U.S. Department of Education, and then immediately reinstating them. The school also added players to the women's softball team just in time for the federal reports -- while not acknowledging players that would be off the team when the spring season opened.

Today's case, which is before Judge Stefan Underhill of the U.S. District Court in Bridgeport, has especially high stakes: it became a class action last month for "all present, prospective, and future female students who are harmed by and want to end [Quinnipiac University's] sex discrimination," according to trial documents. This is an important point: class action ensures that any wins by the volleyball team who filed the suit won't disintegrate when they leave campus. And as other schools flounder in their ability to manage diminishing budgets with equal opportunities, the results of the case will likely guide decisions that are happening on campuses across the nation.

And what of the cheerleaders? While physical effort and ability are a given for many of the high-level gymnasts who cheer, Title IX has specific criteria for what counts as a sport when it comes to equity in athletics: a program must have a defined season, a governing organization, and feature competition as its primary goal. Competitive cheer is not recognized by the National Collegiate Athletics Association (NCAA) as a sport. Nor does it have a governing body: two versions of organizations that have filled the role have been associated with Varsity Brands, Inc., a for-profit company that sells cheerleading gear and hosts up to 60 "national championships" a year. To amplify its case that competitive cheer can indeed count as a varsity sport, Quinnipiac has joined with seven other schools to form the National Competitive Stunts and Tumbling Association, which is intended to be a new governing body for the sport. Four more schools need to sign on for it to be recognized as a legitimate governing body, and the sport itself to be seen as "emerging."

Despite being forced to host a women's volleyball team this year after all and not cut any other women's teams (thanks to a temporary injunction from Judge Underhill), Quinnipiac went ahead with its plans to form a varsity cheer team. It did, however, hastily cut its men's golf, outdoor track, and indoor track. The move is a sad one that feeds the idea that it's a zero-sum game in athletics -- if women's sports win, then men's sports lose. Given that Title IX is well-established law, it is a tired point. Calling for excellent and numerous opportunities for women to play sports is not the same thing as calling for the dismantling of men's programs; the Title IX vision is for these programs to co-exist, even compliment one another.

Now, it's possible that competitive cheer could be a legitimate sport. I'm open to the point. But what a sorry birth it would be for varsity cheerleading if it were to come out of a swamp of data manipulation and lawsuits that pit sports against one another, making a mockery of any claimed commitment to the participation of women in athletics. In this case, I'm cheering for the volleyball team.