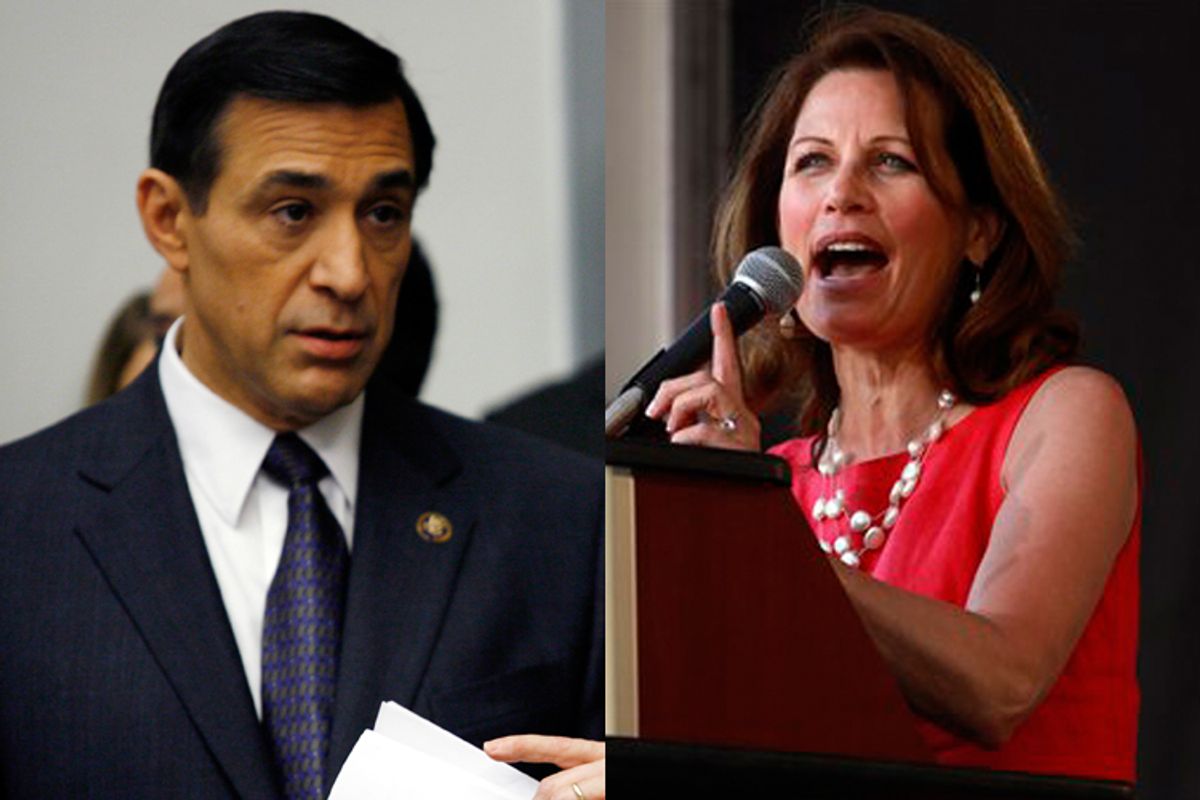 The right's desperate attempt to make the massive BP oil geyser into an effective political attack on Barack Obama hit a bit of a setbeck when Joe Barton apologized to BP on behalf of the government that "forced" them to voluntarily establish an escrow account to pay damages to people affected by the spill.

But for some of the true believers in the GOP, this is a wonderful time to bring back Compassionate Conservatism. Specifically, the brand of conservativism that has endless compassion for poor, put-upon multibillion-dollar corporate interests. Conservatives feel the pain of a chemical company that doesn't want to contribute to the Superfund, the oil company that's scared that it might have to pay damages if one of its deep-sea rigs explodes due to cost-cutting, and the massive financial institution that wants to destroy the global economy and then receive billions in taxpayer funds entirely without oversight or further regulation.

Michele Bachmann is the picture of this new compassion. She's been pitying poor BP since before everyone threw Joe Barton under the bus and she's not going to stop now.

Bill O'Reilly -- who these days is a winking parody of his old cartoono-fascist self -- actually attempted to get the Minnesota congresswoman to explain why, exactly, it was a bad thing for the president to apply pressure on a negligent corporation until they agreed to do the right thing. Bachamnn is pretty sure BP agreed to the escrow fund only because they were concerned Obama was literally going to have his shock troops frog-march all of them to "the slammer" if they didn't give into his demands.

On a similar "I may not agree with what major corporations flood with barrels of crude but I will fight to the death for their right to flood it" note, Here is Reihan Salam, America's most reasonable "Reasonable Conservative," writing in Tina Brown's E-Newsletter this morning:

It should go without saying that demanding money from BP is not quite like a playground full of schoolyard bullies kicking a kid when he's down. For one thing, BP isn't terribly sympathetic. But that's precisely the point—the Muslims who were burned alive in Gujarat in 2002 weren't sympathetic to those who victimized them either. And that’s why we’ve developed long, drawn-out legal processes: to create an orderly society, we at least try to contain and manage our desire for vengeance.

And that's how Reihan Salam inadvertently revealed that he is a squishy liberal, concerned about fairness and the rule of law -- once the victim of bloodthirsty mob justice is a huge multinational corporation. (Perhaps forcing oil companies to establish escrow accounts to pay back victims of their negligence should be reclassified as a hate crime?)

The center-right capital-L Liberals at the Economist were similarly outraged at the spectacle of a president winning, or seeming to have won, a negotiation with a company that poisoned a huge portion of the nation and has thus far proved unable to cap its own gushing leak.

All of this sets, obviously, a terrifying precedent -- if the president is allowed to get away with these strong-arm tactics now, future companies may be disinclined to spill millions of gallons of oil into our oceans and waterways.

But there's hope! Darrell Issa, the Republican who would be House Oversight Committee chairman, recently explained how the powerful House committee would become a much friendlier place for these brave corporate heroes should the Republicans retake the House:

"I won't use it to have corporate America live in fear that we're going to subpoena everything. I will use it to get the very information that today the White House is either shredding or not producing."

Fear not, downtrodden corporations of America (and also those established overseas that do business here): you're 39 House seats away from a fairer and more just America, where you'll never be penalized for the "crime" of being successful. Or for poisoning the land or sea, or killing people, or destroying livelihoods through negligence or malfeasance. We won't even know about it, honestly, because we will be too busy impeaching Barack Obama for offering someone an unpaid internship in exchange for not running against Rahm Emanuel for mayor of Chicago.