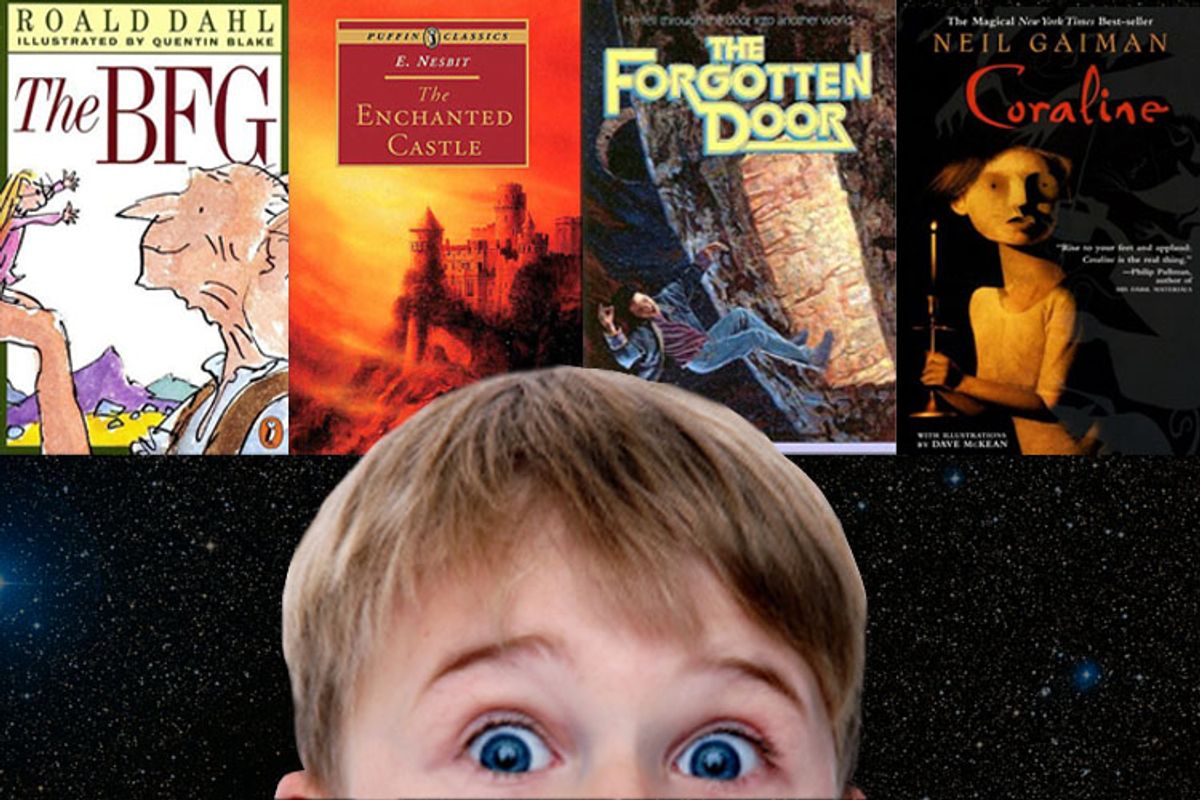 I confess: I have no children, and yet I read children's books. Sometimes I simply don't have the mental energy to crack open a serious adult book (think "The Wind-up Bird Chronicle," by Haruki Murakami, or "Truth," by Simon Blackburn) or even a piece of light fiction (think Carl Hiaasen or James Hynes). Instead, I'll turn to some old favorites from my childhood, along with a few newer ones that have joined the ranks in recent years. Because my tastes ran to science fiction and fantasy when I was young, these recommendations all share that flavor.

I've always been a fan of Roald Dahl, for both his children's books and his adult offerings. "The BFG" is one of his most charming books for children. The BFG (for Big Friendly Giant) is a giant who kidnaps a little orphan, Sophie, and takes her off to his cave. The BFG turns out not to be a bad sort, however -- in part because he doesn't share with his monstrous giant brothers "a most squackling whoppsy appetite" for eating children -- and teams up with Sophie (and the Queen of England) to do battle against those evil brothers of his: Bloodbottler, Bonecruncher, Childchewer, Fleshlumpeater, Gizzardgulper, Maidmasher, Manhugger, Meatdripper, and Butcher Boy. The BFG's creative use of language is the best part of the book, though Blake Quentin's illustrations make a close second.

"The Forgotten Door," by Alexander Key, introduces us to Little Jon, who falls through the old Door: "the Door that led to another place, the one that had been closed so long." Jon is struck on the head, and when he awakens, he discovers that he's lost his memory. But Jon is no ordinary boy. When he talks to animals, the animals actually listen (though I don't recall Jon ever talking to a cat in the story); Jon in turn can read their thoughts. He has a few other mysterious abilities, which the family who finds him discovers as the story unfolds. It's a classic theme: Jon needs to find his way back home. There's also a striking current of distrust of big government that runs through the end of this 1965 book, adding an interesting contrast for the modern reader to consider.

Edith Nesbit wrote dozens of children's stories in the late 1800s and early 1900s, among them "The Enchanted Castle" in 1907. I first read this book decades ago when I discovered it in one of the attic bedrooms of my grandparents' house, and I found it irresistible. Four English children, three living with a French governess and the fourth the niece of the castle's housekeeper, discover a magic ring and find out what it can do. The writing moves at a slower pace than modern children's books, and the children sometimes don't sound like children at all, but it's all worthwhile. You'll be reminded of Kenneth Grahame's "The Wind in the Willows," published just a year later, and you'll understand why C.S. Lewis cites Nesbit as an influence on his "Narnia" novels. (Grahame and Lewis are worth reading as well, of course.)

Philip Pullman's trilogy, "His Dark Materials," begins with "The Golden Compass" (titled "Northern Lights" in the UK). The most engaging conceit in these books is that, in the parallel-world setting of the story, people are accompanied by daemons, their souls embodied in the form of animals. Adult daemons take the form of animals that reflect their personalities: A servant might have a dog daemon, a scholar an owl or a raven daemon. Children's daemons can change shape until the child reaches adolescence. Young Lyra and her daemon Pantalaimon happen into a mystery that could affect not only their world but our earth as well, and even the afterlife. The promise of the first two books isn't quite met in the last, but they're all well worth reading (the second and third books are "The Subtle Knife" and "The Amber Spyglass"). One of my favorite bits of Pullman's writing, which helps establish the tone for the narration, is an early description of Lyra: "She was a coarse and greedy little savage, for the most part." Lyra does grow up eventually, though it's a long, hard journey.

Finally, I should mention Neil Gaiman's work: "Coraline" is one of my favorites.