On eve of Senate runoff, the issue for N.C. Dems is electability 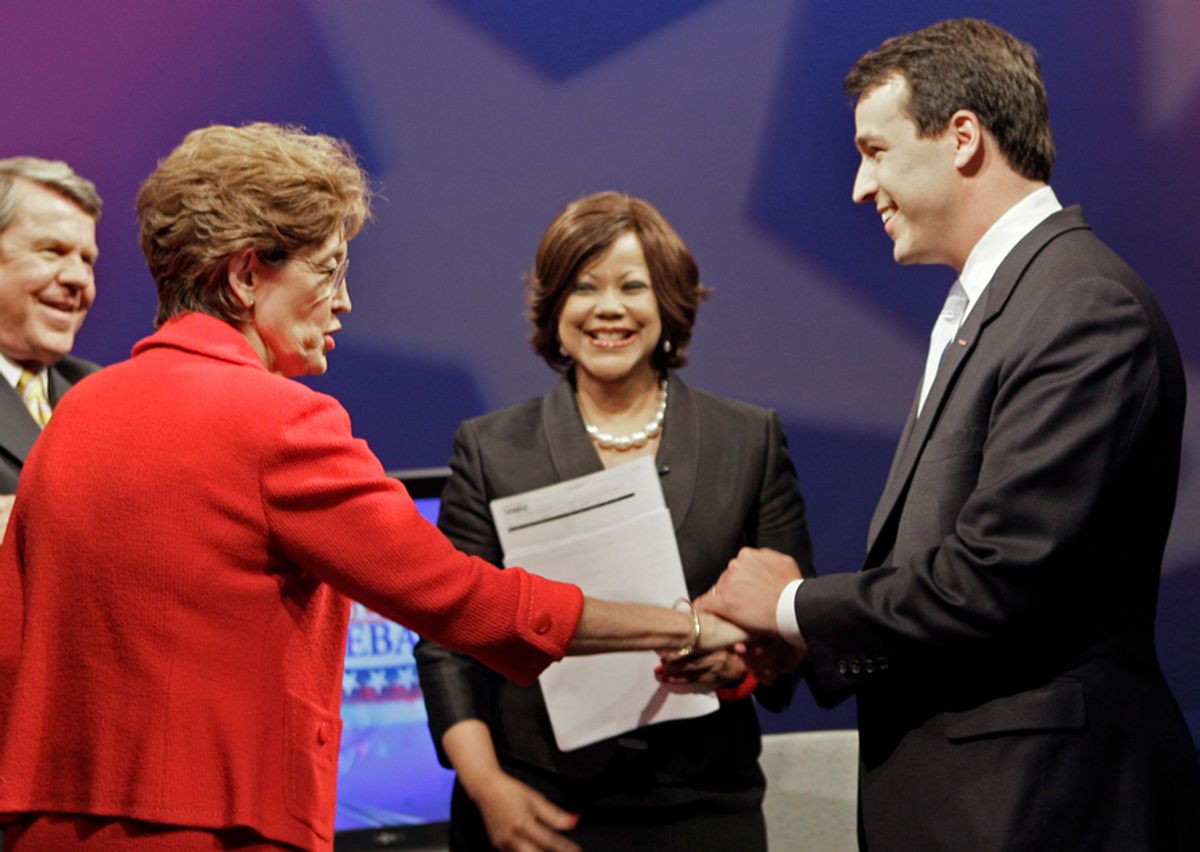 Insofar as people are talking about North Carolina Democrats, the subject tends to be Rep. Bob Etheridge and his baffling, bleary-eyed assault on two college journalists. Almost no one, it seems, is talking about Elaine Marshall and Cal Cunningham, who will face off in a Tuesday runoff for the right to oppose Republican Sen. Richard Burr this fall.

On the surface, the Democratic race should be attracting attention, with Burr -- despite the national climate of 2010 and the conservative bent of North Carolina -- struggling in the polls. But funding for Cunningham and Marshall is limited and turnout is expected to be low.

"It’s truly a tossup," said Dean Debnam, the CEO of Public Polling Policy, a North Carolina-based polling firm. "Neither candidate has enough money to communicate to a state the size of North Carolina," he added.

Cunningham, a clean-cut 36-year-old who was a member of the state Senate from 2001 to 2003, has military credentials (he’s a captain in the Army reserves with two tours of duty under his belt) and a warm, dimple-framed smile in his arsenal -- both factors in the Democratic Senatorial Campaign Committee's aggressive recruitment of him.

The more experienced Marshall, 64, is the first woman to be elected North Carolina's secretary of state -- an office she first won in 1996 -- and is marginally better known than her opponent.

In the three-way May 4 preliminary, Marshall finished first, but was 4 percent shy of the 40 percent of votes needed to avoid a runoff. The candidates are heading into the runoff equal in the polls, but to call what they share "popularity" would be an overstatement. Less than 15 percent of registered voters came out to vote on May 4, and not many more are anticipated to weigh in for the runoff.

Issues aren't driving the Democratic race. Both candidates are running on broadly centrist platforms; both vow to stand up to Wall Street special interests; both vow to address the state’s high rate of unemployment.

The real debate is over electability: whether an attractive young Iraq war vet or a seasoned female politician will fare better against Burr.

The DSCC is putting its money on Cunningham. Federal Election Commission reports show he has received $79,980 from the DSCC for this campaign (a considerable portion of his meager $1.2 million campaign donations). Meanwhile MoveOn and Ken Lewis (the third candidate in the preliminary) have come out in support of Marshall. Of course, the combined war chests of both campaigns are just one-fifth of the approximately $10 million Burr has.

"Neither have strong internal organizations; neither have been vessels for major funding; neither has enough money for TV commercials or grass-roots organizing," said Ferrel Guillory, the director of the Program on Public Life at the University of North Carolina, Chapel Hill, and an expert on Southern politics.

Still, Guillory thinks the race could get interesting after the Democratic nomination is settled.

"This primary is not totally indicative of a candidate’s ability to catch a wave come fall," he noted.

This year, of course, the Democrats will not have the advantages of the money and energy of the Obama campaign to help usher their candidates into the Senate. And the national mood seems to be working against Democrats in a way it wasn't in the last two cycles.  But Guillory maintains that the Tar Heel State is not necessarily out of the Democrats' reach this year.

"I think Burr would be willing to run an aggressive attack campaign -- but he’s not come across as particularly high flying," he said. "So if money does flow to whoever wins this runoff, there’s the potential for turning this race into a classic Republican vs. Democrat debate."

Right now, the DSCC is happy to feed that kind of talk. "This election, North Carolina voters will have a clear choice between a Democrat who wants to move our economy forward and take on the special interests, and Burr, who stands up for Wall Street and wants to return to the very policies that brought our economy to its knees," said Deirdre Murphy, the DSCC national press secretary. But whether the DSCC backs up that talk with money this fall remains to be seen.

Meanwhile, Burr’s office -- not wanting to comment on the primary candidates -- promised to focus on jobs as the No. 1 issue in their campaign.