The dark side of the farmers' market boom

City dwellers may love buying locally, but what does it mean for the farmers' own communities? 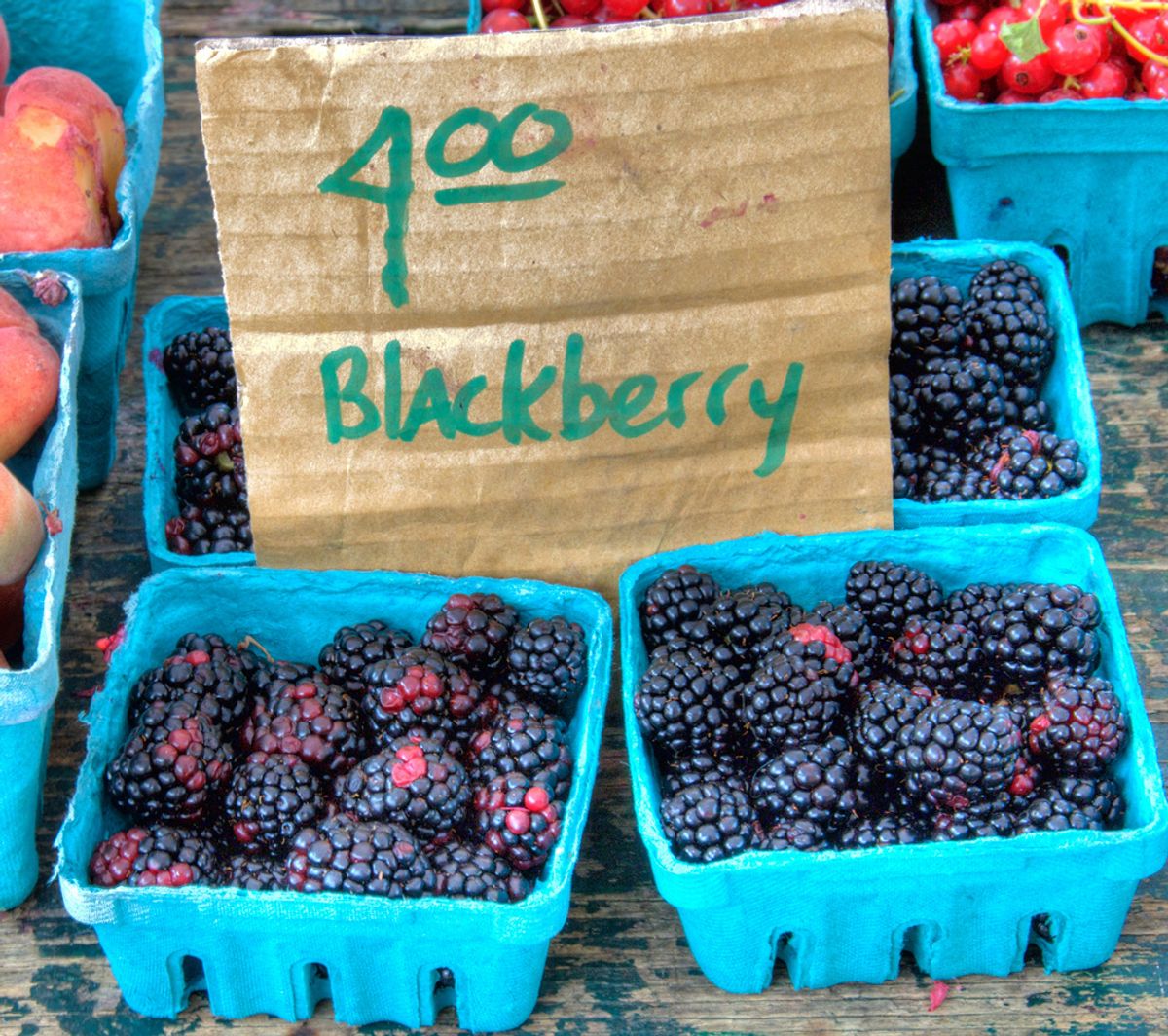 Picture this: You're at your local farmers' market, inspecting a jar of gooseberry preserves. A ruddy man in overalls sells a cornucopia of produce -- seaweed green lettuce, golden peaches and plump tomatoes. The smell of fresh, earthy goodness distracts you from deciding which jam you'd prefer for breakfast tomorrow. Farmers' markets have never had it better in the United States.

According to the latest report by the USDA, the number of markets in the country tripled since the mid-1990s. They're being touted as the panacea for everything from the obesity epidemic to the exploitation of farmers by big-chain supermarkets. Locavores love them. Environmentalists adore them. Raw foodies can't do without them.

But what if there's a little-known dark side to the farmers' market boom? What if the ruddy man in overalls actually came from hours away, where local residents don't have access to the vegetables grown near their own backyards because farmers prefer selling their produce to city dwellers at nearly triple the price?

Linda Aleci, a historian and co-founder of the Local Economy Center at Franklin and Marshall College in Lancaster, Pennsylvania, undertook a three-year study of the farmers' market in her city. Her findings suggested that the local farmers' market -- serving a poor, food-insecure community -- was suffering from the growth of markets in the Philadelphia metro region and in Lancaster County. Salon spoke to her to find out more.

Can you tell us more about your study and what you found?

Lancaster County's Eastern Market started as a community food project in 2006. Its purpose is to serve the at-risk, food-insecure population in the area. It's a critical market, the kind of market we should be paying attention to. Over a three-year period, we tracked where the customers were coming from, where else they were buying their produce from, where the farmers were coming from and which markets they were going to, if they opted to leave our market. 2007 was a boom year for farmers' markets in our county. We found that soon after the boom, Eastern Market lost a significant number of farmers to bigger markets with more affluent customers.

What, specifically, needs to change to make farmers' markets more beneficial to everyone and not just the affluent urban population?

This is the first time we're hearing that there might actually be too many farmers' markets. What does this mean in terms of the sustainability of farmers' markets and their ability to bring about change? Is there more research on the subject?

Some research is slowly emerging. For instance, the 2006 USDA survey for market managers shows that 30 percent of the seasonal markets in the country are less than 5 years old. They're still establishing themselves and underperforming compared to longer-standing markets. They have fewer consumers, fewer vendors and return lower revenues. This means that the national growth in the number of farmers' markets is not mirrored in a corresponding growth in sales. It may also be that the increase in farmers' markets is not actually resulting in a corresponding increase in farmers. Instead, there are more farmers who are hopscotching around different markets.

Why do farmers prefer to sell in big cities despite the cost associated with transportation, rents, etc.?

We found that in bigger markets like Philadelphia and New York, farmers were selling their produce for up to four times the prices they would charge at the Eastern Market. The cost associated with transport at this point is less than the profits they make at bigger metropolitan markets.

So isn't any solution we come up with ultimately disadvantageous for the farmer?

The question of whether farmers' markets are benefiting the consumer or the farmer is one of the big tensions in local food systems. The Lancaster Farm-Fresh Co-operative, for instance, is doubling its sales every year. But a great deal, if not most, of that produce is going to Philadelphia, not to Lancaster County consumers.

The other question that comes up, then, is whether farmers' markets should intend to serve the entire region or just their local towns.

There is a growing discussion as to whether we should be developing local or regional food systems. People suggest that farmers' markets should focus on getting their produce out to the entire region. But in our example, Philadelphia residents potentially have access to farm-fresh fruits and vegetables from Lancaster with as much or more ease than residents in the city of Lancaster. I don't think we should automatically be skipping over the local for the regional. Instead, we need to see how both the systems can mesh together.

Are there other regions in the United States like Lancaster County -- areas where markets are faltering because of the boom in markets nationally?

I think areas around Oregon have been facing similar problems. I also know from conversations that are happening at the Farmers Market Coalition -- a national body -- that this is something that is trending nationally. The saturation of markets is probably most noticeable in the Northeast because of the high concentration of urban areas along with peri-urban farms.

What does the future look like for farmers' markets in the United States?

Some of the conversations that have been happening suggest that statewide farmers' associations can play a role in deciding which areas need markets the most. But I don't think we can predict what the future will look like until we start doing more research.I want to emphasize that I am not am alarmist; this is an exciting and brave new world we are facing. But I would like to see more planning, informed by real research, become the foundation from which we build a better food system.