Secretary-General of NATO calls Rolling Stone article "unfortunate," says it has no bearing on current conflicts 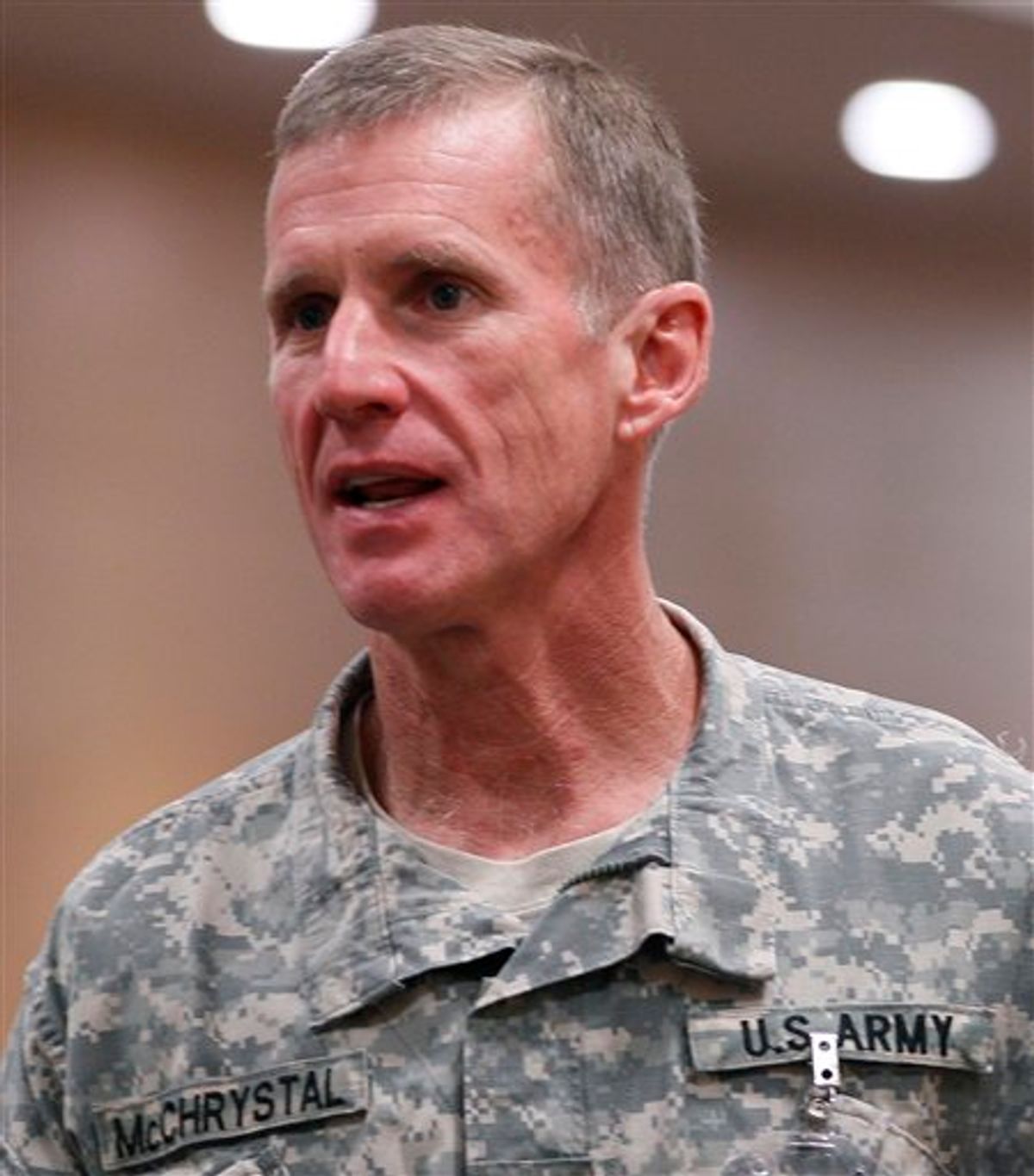 U.S. Gen. Stanley McChrystal, the commander of the NATO and U.S. forces in Afghanistan, pauses in the hall before attending a meeting with U.S. Defense Secretary Robert M. Gates, not pictured, at NATO headquarter in Brussels, Thursday, June 10, 2010. (AP Photo/Carolyn Kaster, Pool) (AP)
--

Afghan President Hamid Karzai gave a strong endorsement Tuesday to embattled Gen. Stanley McChrystal, describing him as the "best commander" of the war and expressing hope that he keeps his job despite a magazine profile replete with derogatory comments about President Barack Obama and members of the U.S. national strategy team.

While Obama's relationship with Karzai has sometimes been rocky, McChrystal has cultivated the Afghan leader, encouraging him to visit remote areas of the country and assume responsibility for military operations against the Taliban.

Karzai's chief spokesman said the Afghan leader believes McChrystal is a person of "great integrity" and had displayed a very good understanding of the Afghan people and the Afghan culture.

"The president believes that Gen. McChrystal is the best commander that NATO and coalition forces have had in Afghanistan over the past nine years," spokesman Waheed Omar said. Omar said McChrystal has worked closely with Karzai since he took command last year and that "lots of things have improved."

Asked what would happen if McChrystal were replaced, Omar said: "Of course, we hope that that does not happen."

McChrystal also received a vote of confidence from the secretary-general of NATO, Anders Fogh Rasmussen, who appeared concerned over the impact of a possible change of command at a time of rising casualties and faltering political support within allied capitals.

"The Rolling Stone article is rather unfortunate, but it is just an article," the alliance said in a statement issued in Brussels, Belgium. "We are in the middle of a very real conflict, and the secretary general has full confidence in Gen. McChrystal as the NATO commander, and in his strategy."

The U.S. Embassy followed with its own statement, downplaying any ongoing rift between McChrystal and Ambassador Karl Eikenberry, who was criticized in the profile.

Kabul was abuzz Tuesday as the flap unfolded throughout the day. McChrystal publicly apologized and made a round of phone calls to those maligned by comments made by him and his staff. His civilian media adviser who had arranged the Rolling Stone interviews, Duncan Boothby, submitted a letter of resignation and was subsequently let go.

Obama, who was angered by the article, hastily summoned the top commander in Afghanistan to Washington, ordering him to attend a White House meeting on Afghanistan and Pakistan in person Wednesday and explain comments made to Rolling Stone magazine.

The White House said McChrystal made an "enormous mistake" in the unflattering magazine article and that "all options are on the table" with regard to the general's job.

McChrystal has enjoyed close relations with Karzai since assuming command in June 2009 a month after his predecessor, Gen. David McKiernan, was relieved. Defense Secretary Robert Gates said at the time that the Obama administration needed "fresh thinking" to turn around the war against a resurgent Taliban.

McChrystal unveiled a strategy that shifted the focus from simply fighting the Taliban and its allies to protecting the Afghan people in hopes of weaning them away from the insurgents and shoring up support for the Afghan government.

McChrystal ordered U.S. and NATO forces to show restraint in battles where civilian lives were at risk, heeding Karzai's complaints that the heavy use of airpower was turning the population against the NATO mission. McChrystal established new rules of engagement which curbed the use of heavy weapons -- a move that helped reduce civilian deaths attributed to the coalition but that brought complaints from soldiers in the field.

Most recently, McChrystal had sought to win public support for a planned security operation in the largest city in the south, Kandahar, organizing meetings with community leaders to explain the strategy even at the cost of delays in the timetable.

"He is the first good thing to happen to Afghanistan," said Karzai's half brother Ahmad Wali Karzai, considered the most powerful figure in Kandahar. "He is active. He is honest. He does a good job, a lot of positive things have happened since he has come."

Ghulam Dasdagar Azad, the governor of Nimroz province in western Afghanistan, praised McChrystal for his efforts to reduce civilian casualties.

"Airstrikes were reduced and he has very good cooperation with the Afghan troops," Azad said Tuesday. "My request is for the Obama administration to keep him. This is my message."

Those sentiments were echoed by Mohammad Akbari, a member of parliament from Bamiyan province and a leader of the Hazara ethnic minority in Afghanistan.

"He is active and is a good person. He has good experience," Akbari said. "For the current situation, he is good."