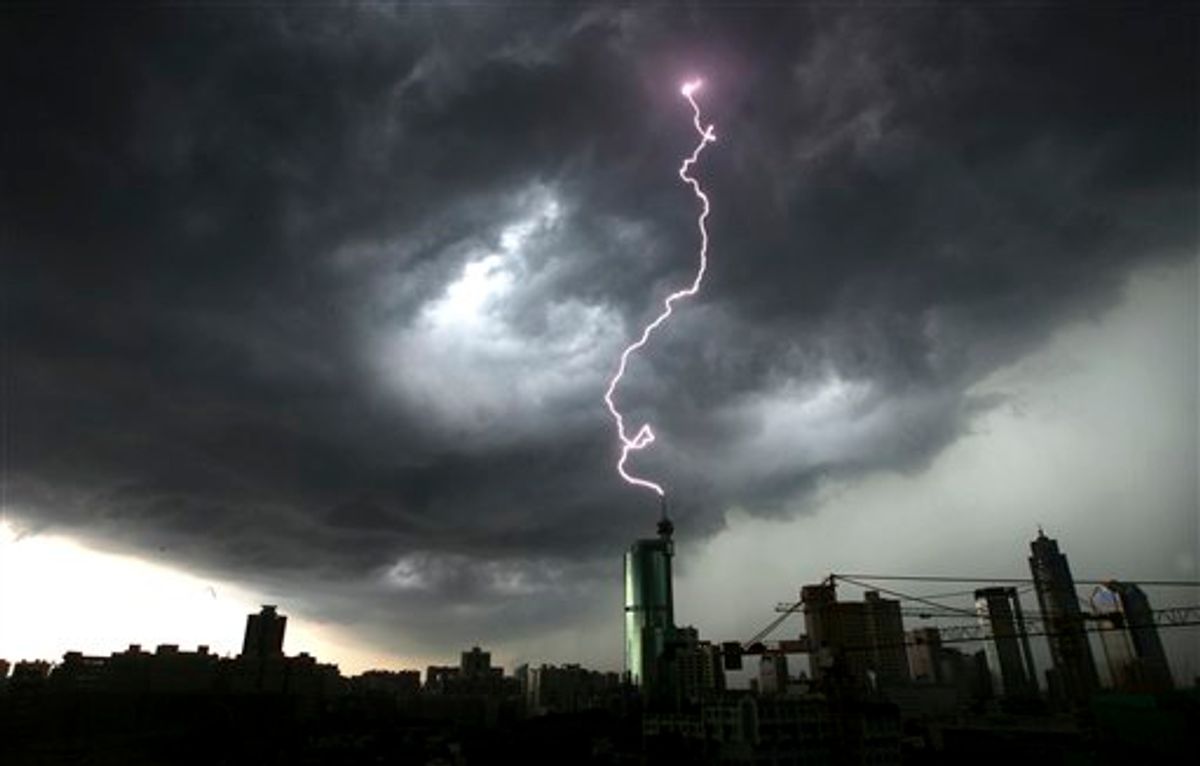 In this photo taken Monday, June 21, 2010, a lightning strikes the top of a building in Foshan in south China's Guangdong province. On Tuesday, President Hu Jintao and Premier Wen Jiabao have called for stepped-up rescue efforts after torrential rains brought down a dike in southern China, forcing 68,000 people to flee their homes. (AP Photo) ** CHINA OUT ** (AP)
--

Floodwaters breached the Changkai levee on the Fu River in Jiangxi province late Monday, forcing residents to relocate from their homes in the nearby city of Fuzhou, the official Xinhua News Agency reported. No casualties have been reported.

Storms have pounded southern China for more than a week, killing at least 199 people, with 123 still missing, as landslides have cut off transportation, and rivers and reservoirs have overflowed, Xinhua said.

State television showed police with pants legs rolled up, pushing boats carrying residents through shallow water. In some places, floodwaters reached nearly to the second story of buildings, while in others only the tops of trees were visible.

Soldiers unloaded stacks of rowboats as they raced to rescue stranded residents, many of whom were shown standing helplessly on balconies.

The China Central Television report said some 88,000 people have been displaced.

Army and volunteer rescue teams have been working around the clock near Fuzhou to sandbag vulnerable areas, Xinhua said.

President Hu Jintao and Premier Wen Jiabao called on rescuers to work hard to control the flood, according to the Jiangxi Provincial Flood Control and Drought Relief Headquarters.

Flooding has affected more than 10 million residents across southern China, with heavy storms expected to move south in the coming days toward Fujian and Guangzhou provinces.

China sustains major flooding annually along the mighty Yangtze and other major rivers, but this year's floods have been especially heavy, spreading across nine provinces and regions in the south and along the eastern coast.