How volcanoes and booze got the McChrystal story, and how Rolling Stone lost it

A reporter's two days with McChrystal became 10 and a drunken bus trip; how Rolling Stone lost the story online 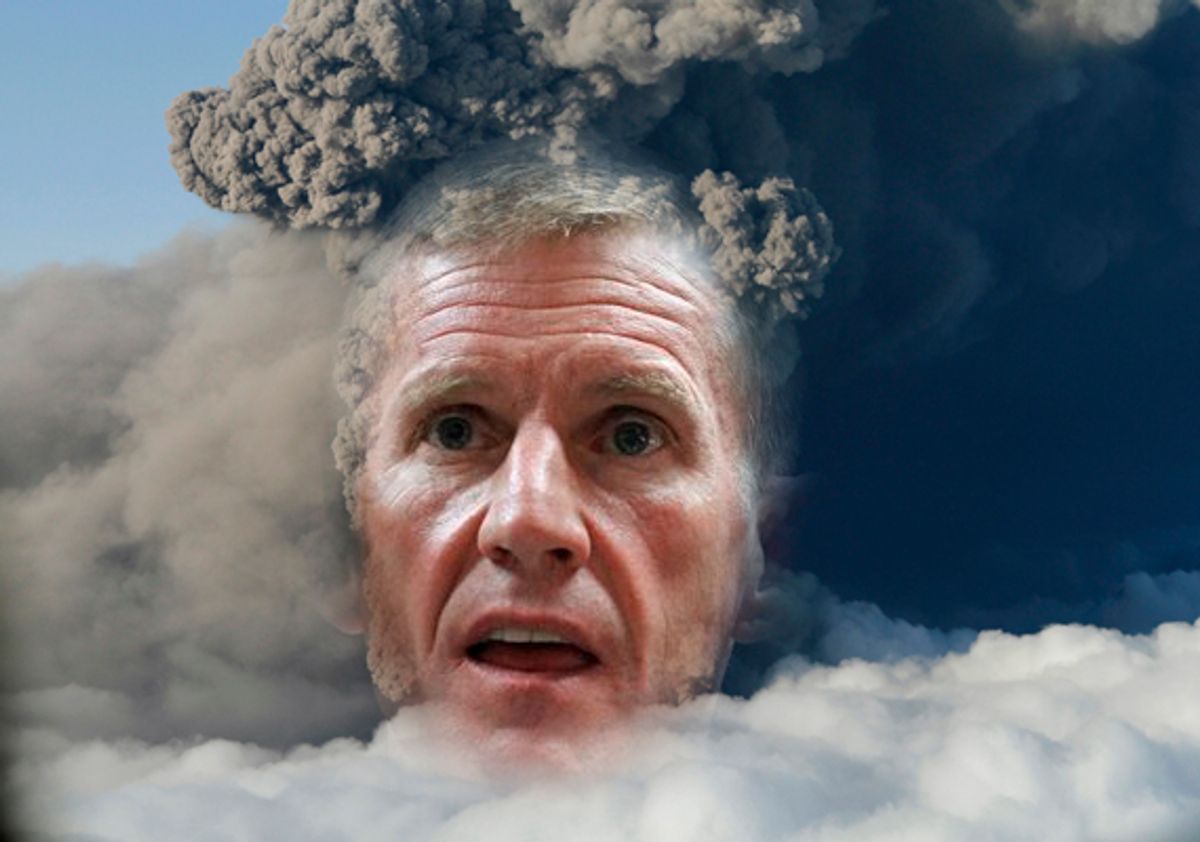 An ash plume rises from a volcano under the Eyjafjallajokull glacier May 17, 2010. Volcanic ash from Iceland grounded 1,000 flights and delayed hundreds of thousands of passengers in parts of northern Europe on Monday, although forecasters said the situation would improve during the week. Several of Europe's busiest airports, including London's Heathrow and Schiphol in Amsterdam, were closed for several hours due to fears the ash could damage jet engines and bring down aircraft. REUTERS/Ingolfur Juliusson (ICELAND - Tags: TRANSPORT BUSINESS ENVIRONMENT DISASTER) (Â© Ingolfur Juliusson / Reuters)
--

[Updated] Volcanic ash and old-fashioned liquor are apparently to thank for the Rolling Stone story that may get our top commander in Afghanistan fired. According to the story's author, Michael Hastings, he was scheduled for two days in Paris with Gen. Stanley McChrystal. Then, the volcano erupted in Iceland.

Now Hastings had 10 days with McChrystal in Paris, and then to Berlin, by bus. And the general and his team drank the whole way. "They let loose" on the bus, according to Hastings, who spoke to NBC.

Rolling Stone didn't ask the White House for comment prior to publication. It fact-checked the quotes with McChrystal, but didn't show him the piece before it ran. Last night R.S. sent embargoed copies of the story to media outlets. This morning, Politico posted a pdf of the whole piece. Rolling Stone executive editor Eric Bates, talking to the Huffington Post, was unhappy about that:

The Rolling Stone editor had some other choice words for Politico, beyond an irritation over its inaccurate take on the fact checking behind the piece. Bates chastised the publication for linking Hastings story to its own site, as a means of driving web traffic there and not to Rolling Stone. "They posted our story on their site, which was inappropriate," said Bates. "We contacted them immediately and they took it down."

It was, indeed, pretty out of line for Politico to just publish the entire story. But Rolling Stone didn't have the story -- or even an excerpt! -- on its own website, because it's confused by and terrified of the Internet. So, it didn't really lose out on any useful traffic.

Hours later, around 11 or so this morning, Rolling Stone's editors finally posted the article themselves. They did not link to it on the front page, of course, so anyone going to the Rolling Stone site to read the article that everyone in the world was talking about had no good way to actually find it. Presumably, the hope was that all of those confused would-be readers would immediately go out to the nearest Barnes and Noble to buy copies of the magazine.

(The Huffington Post's business model is, of course, built around appropriating the content of others, making all of this a bit rich.)

All of this led to the slightly odd spectacle last night and this morning of nearly every journalist and pundit in the country incessantly talking about the story that everyone was talking about, but that only the pundits and journalists had actually had the privilege of reading.

Which, you may note, also happened with the last couple of major Matt Taibbi pieces (until random bloggers also just posted those online in their entirety, far, far away from Rolling Stone's ad servers), and, for those of you who care about such things, that very good Vanessa Grigoriadis piece on the Britney Spears meltdown some years back.

Update: I just talked to Rolling Stone editor Eric Bates -- and I should apologize for calling the magazine confused by and terrified of the internet. (Though I still suspect that is true of publisher Jann Wenner!) According to Bates, Time Inc, and not just Politico, posted the story in its entirety. Rolling Stone had scheduled the story to run online tomorrow morning, when their national affairs stories usually go live, but they hadn't expected the White House to respond so quickly. Once they saw the McChrystal story become "not just a story, but the story of the day," the decision to put it up immediately took "ten seconds."

"We responded immediately," Bates told me. And the story went live as soon as he got to the office -- after doing "Morning Joe."

I think Rolling Stone would've been better served by having the story up much sooner after it sent the embargoed copies to every journalist in Washington and New York, but it is heartening to know that they weren't planning to wait a month. And they're obviously not to blame for Politico and Time stealing from them.