The column David Brooks should have written today

Almost word for word, his new piece about Obama could have been about Ronald Reagan 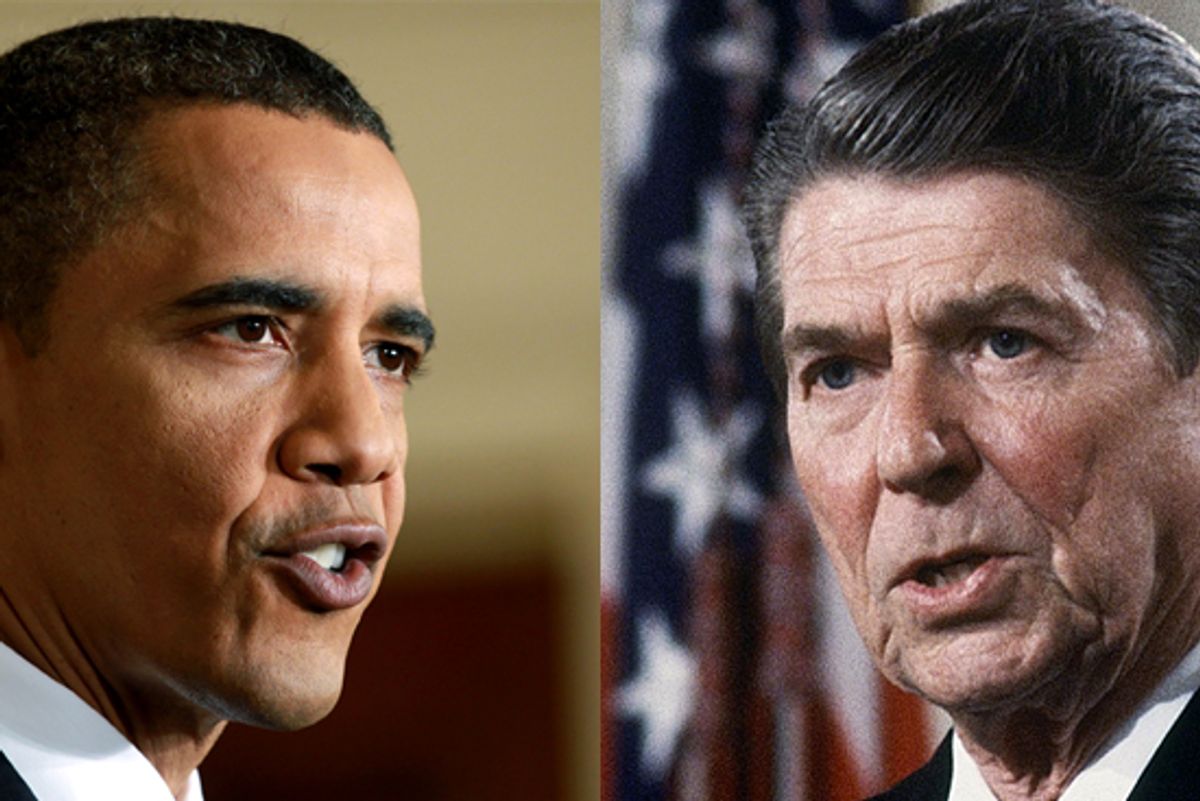 As you might know, I have particular impatience with columnists who draw sweeping conclusions about the fate of President Obama's presidency based on his current poll numbers. Case in point: David Brooks' offering this morning. (Go ahead and read it for yourself, if you haven't already.)

Instead of responding point by point, I figured I'd just roll back the clock a few decades and show how practically the exact same column could have been written (bogus sweeping conclusions and all) about Ronald Reagan and his presidency in the summer of 1982.

It was the winter of 1979. Dr. Faustus, the billionaire right-wing donor, was sitting at his country club in despair over the Carter regime and the future of his country.

Suddenly, Mephistopheles, who happened to be the club’s resident golf pro, appeared, sipping a scotch on the rocks. He sat down next to Dr. Faustus and casually asked him if he would like to be granted any five wishes in exchange for his immortal soul.

This was Dr. Faustus’s chance to do something grand for his country. He would lose his soul, but if he chose wisely, he could make the United States a bastion of conservatism forevermore.

“I agree, Lord of Darkness, if you grant me the following wishes: First, I would like the nation’s Misery Index (the unemployment and inflation rates combined) to reach an all-time high -- over 20 percent, if that's not asking too much, and with no relief in sight. This will discredit the New Deal/Great Society consensus that has shaped America’s economic policy for decades."

“It will be done,” Mephistopheles vowed.

“Then I would like you to find the most likable, reassuring, television-friendly Republican politician in the land and make him president.”

“Then I would like you to create a political climate so he can immediately enact a $750 billion tax cut package -- with the relief heavily skewed to favor upper-income Americans, of course. This will avert economic collapse and show the American people how effective supply-side economics can be.”

“Then I would like the new president to radically increase spending on national defense, maybe even to launch some kind of outer space missile deflection system, like you might see in a movie. This will show a grateful nation that government can defeat the Soviet Union and the global Communist threat."

“If you do all this, America will be transformed. Liberalism will be in retreat and conservatism will reign supreme! Just to be sure, I would like thousands of air traffic controllers to walk off the job over their petty contract demands. Then, when the new Republican president fires them instead of caving, it will completely discredit the weak-kneed Democratic approach to public employee unions, and unions in general."

And, indeed, everything Dr. Faustus wished for came to pass. Yet he watched events unfold with growing horror. Not in his lifetime had there been a sequence of events so perfectly designed to fortify conservatism. Yet the country wasn’t swinging to the right; it was swinging to the left!

Surveys showed public opinion drifting leftward on issue after issue: social spending, tax fairness, foreign policy and the role of government. Far from leading Americans, Republicans were repelling them. By the middle of the new Republican president's second year in office, his approval rating stood at barely over 40 percent -- lower than Carter was at the same point in his failed presidency!

Prospects for the 1982 election are grim. Reagan's 1980 landslide -- and the GOP's down-ballot success -- was keyed by defections from one in four self-identified Democrats. But just months before the midterms, those Democrats have returned to their party's fold. And independent voters now say they'd rather vote for Democratic congressional candidates than for Republicans; Democrats now lead in generic ballot polling by a three-to-two margin.

Moreover, polls now show that a majority of voters disagree with Reagan's heavy defense spending, oppose his calls to cut aid to the poor, do not believe his tax cuts will benefit all Americans, and fear his economic program will mire the country in unacceptable debt. Nearly two-third of voters say he hasn't done enough to address unemployment, and -- for the first time in his presidency -- a plurality of voters now disapprove of his conduct of foreign affairs.

"There is little doubt that the public believes (the supply-side part of) Reaganomics has failed," Edgar Fiedler, an economist who served in the Nixon and Ford administrations, wrote recently. "In view of the high incidence of unemployment and bankruptcy -- in contrast to the investment boom that supply-side policies were supposed to bring -- this is hardly surprising. Much of the disappointment is the administration's own fault, since, following time-honored tradition, it promised too much too soon."

Instead of building faith in conservatism, the events of 1981 and 1982 further undermined it. A majority of Americans now don't believe that Reagan's program will do anything to repair the economy.

Some Kool-Aid sippers (too soon?) on the right say the problem is that the Democrats have better messaging (somehow Tip O'Neill became magically charismatic to independents). Others say the shift to the left is a product of bad economic times. But Dr. Faustus saw a deeper truth. The "Reagan Democrats" of 1980 do not see the world as supply-siders do, even in the most propitious circumstances, and never will.

Bitterly and too late, Dr. Faustus saw that conservatives can’t have their way and still win elections in places like Massachusetts, New Jersey and Ohio. Bitterly and too late, Dr. Faustus recognized that economic policies are about values. If your policies undermine fairness by showering the rich with lavish tax breaks, voters will punish you for it.

Bitterly and too late, Dr. Faustus acknowledged that, thanks to the unprecedented defense build-up and sweeping tax cuts, Americans now see debt as a threat to their well-being. Dr. Faust and his fellow conservatives may see themselves as the champions of the little guy, but in the new age of austerity, many voters see them as protectors of affluent elite.

Democrats have their own problems. They’ve begun over-reading their ideological mandate without the usual intervening step of actually winning an election. But the big story is that conservatives, save for those magical first few months of the Reagan presidency, have failed to create a governing center-right majority. If they can’t do it in circumstances like these, when will they ever?

Dr. Faustus fell back into despair. His soul will spend all eternity trapped in Tom Braden's microphone.