Could Gen. Stanley McChrystal get fired -- or court-martialed? 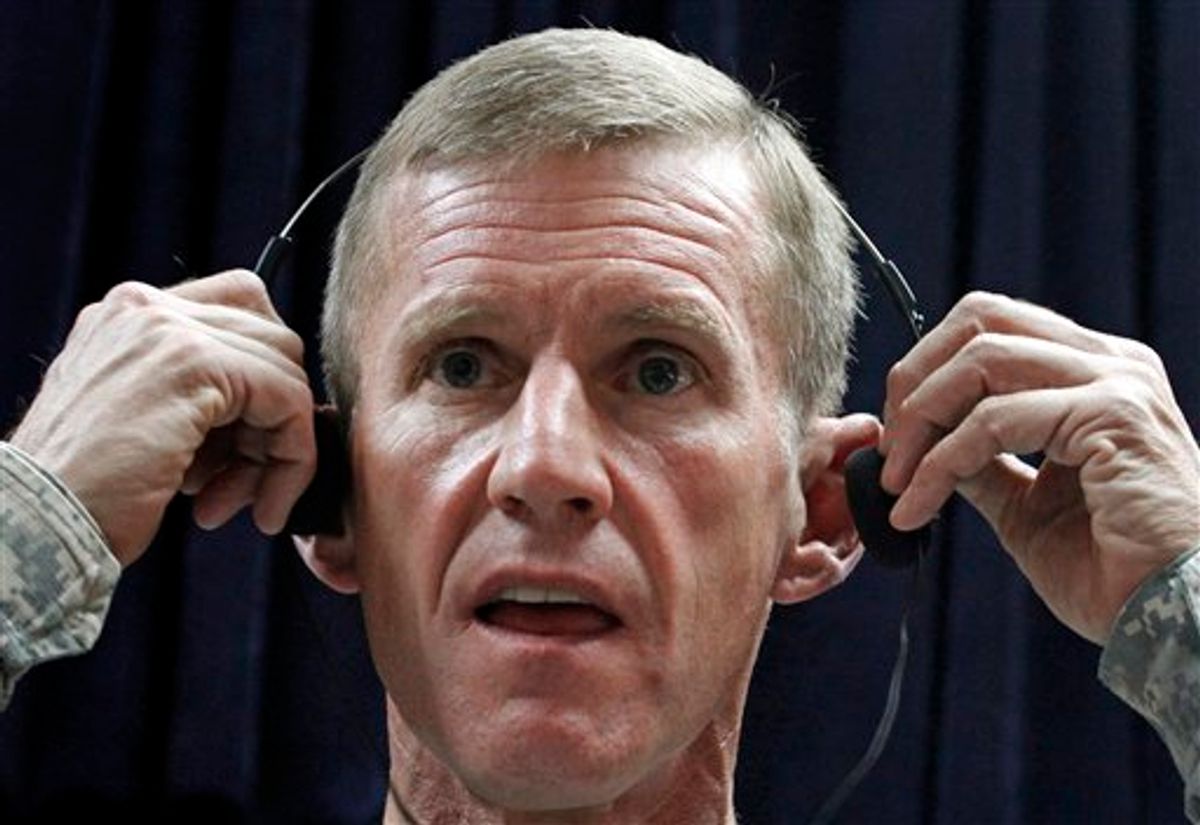 U.S. Gen. Stanley McChrystal, the commander of the NATO and U.S. forces in Afghanistan, adjusts his headphone during a press conference in Kabul, Afghanistan on Sunday, May 30, 2010. Gen. McChrystal stressed Sunday that progress toward real stability in Afghanistan will be slow as international troops painstakingly try to win over a population that includes its enemies and has little trust in the government. (AP Photo/Musadeq Sadeq) (AP)
--

Gen. Stanley McChrystal, commander of NATO forces in Afghanistan, did something incredibly stupid. He cooperated with and spoke far too frankly to a Rolling Stone reporter. He is on his way to Washington to apologize for it. But there's a pretty good case to be made for firing him.

The argument against firing him is that, well, he's in charge in Afghanistan. It's his strategy, he's the counterinsurgency expert, and he's supposed to have made the place ready for drawing down in a year.

But he insulted the civilian leadership of the military, from the State Department's ambassador to the vice-president of the United States. On the record. To Rolling Stone. His staff trashed the president himself. James Fallows says the president must "demonstrate that there are consequences for showing open disrespect for the chain of command."

Spencer Ackerman says there's a case to be made that McChrystal could be court-martialed. But, he adds, McChrystal probably won't even get fired:

Regardless of whether McChrystal should be fired — there’s, frankly, a compelling case to be made when considering the Uniform Code of Military Justice’s penalty of court martial for “any commissioned officer [using] contemptuous words” against the civilian chain of command — my guess is that he won’t be.

But while McChrystal will probably keep his command, his idiotic decision does probably mean that any further escalation of the Afghanistan war is off the table.

An interesting question now is whether Republicans jump on Team McChrystal and begin repeating the complaints made by the general. On the one hand, we know how Republicans feel about undermining the commander in chief during a time of war. On the other, they only think that's bad when the commander in chief is a Republican. Just be on the lookout for some neocons to start bemoaning the influence of Joe Biden while disingenuously talking up their respect for Hillary Clinton.

(Just about an hour ago, you could read the entire forthcoming Rolling Stone piece at Politico, for some reason. I'm guessing that reason is "theft," because you can't do that anymore. Rolling Stone will most likely post the entire thing online some time in mid-July, when everyone is done talking about it. For now, a couple excerpts are here.) (Update: Look, Rolling Stone put it up! They're learning!)