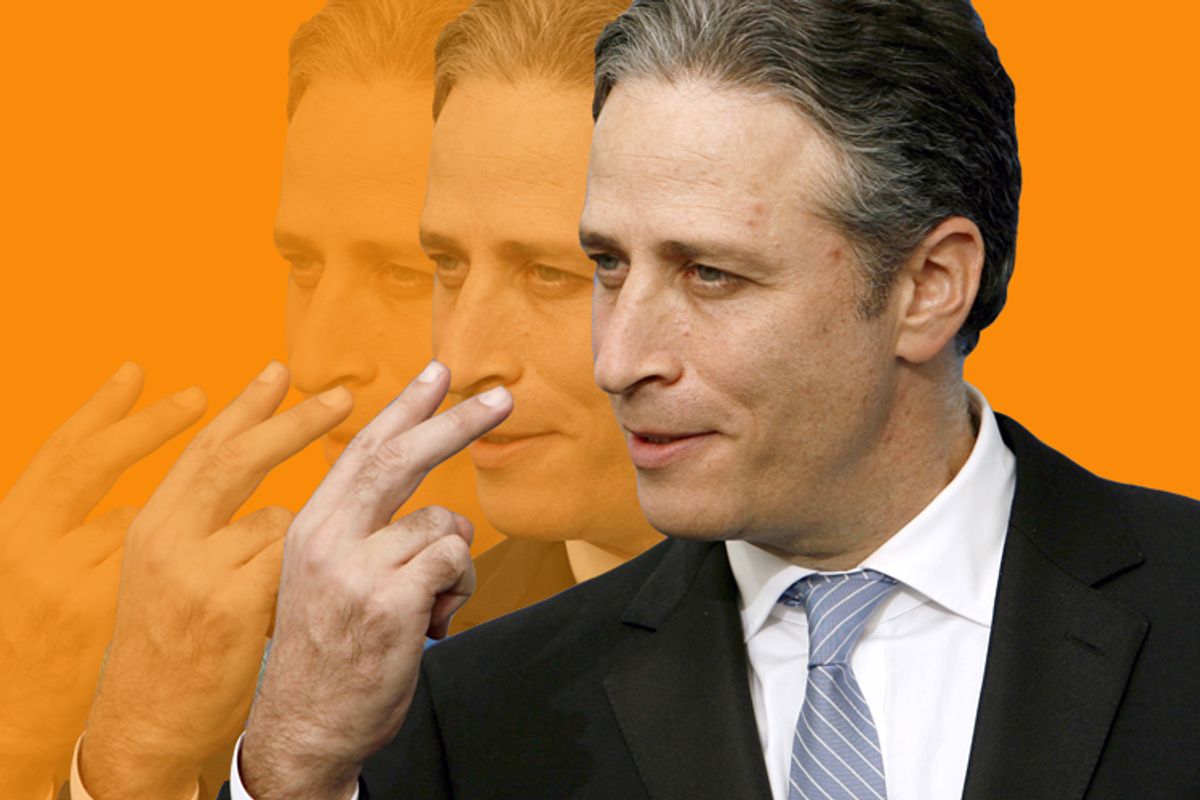 Throughout 2008, "Daily Show" host Jon Stewart assured reporters -- and viewers -- that even though he admired Obama, if the man revealed himself as less than advertised, he'd whip out the long knives just like he did when W. ran things. We had little reason to believe him, since he'd hit his stride with a Republican in the White House.

Believe him. The knives are out. The way Jon Stewart is going after Obama, you'd think the president owed him money.

Consider the June 16 edition of "The Daily Show," arguably Stewart's most pointed attack on Obama's mishandling of the BP oil spill since the disaster began -- and his most merciless attack on Obama generally since the president's inauguration. The segment represented the culmination of Stewart's two-year journey from embittered Bush-era liberal outsider to Obama bobby-soxer to betrayed and disillusioned realist. And it decisively proved that Stewart is more than a stealth muckraker or liberal mouthpiece. He's a true satirist who can take aim at anyone but reserves particular scorn for those who reawakened his sense of hope just long enough to exploit it.

Future presidents take note: You know your administration is in serious trouble when Jon Stewart's people cover the same ongoing crisis for so long they feel the need to devise fresh graphics to liven things up. "The Daily Show" gifted Bush with many such standing headers, most memorably the Iraq war graphic "Mess-O-Potamia." The June 16 program debuted "Day 58: The Strife Aquatic," a goof on Wes Anderson's 2004 comedy "The Life Aquatic."

The reference sent a statement of its own: A future cult film that tanked at the box office on first release, "Aquatic" is about a Jacques Cousteau-type visionary explorer who exploits the hard-won love of his crew by leading them on a mission to hunt down and kill the shark that ate his best friend. The weary prefix "Day 58" was a statement of another kind, one that only became clear as you watched the rest of the segment. It wasn't, "Here we are two months in, and the disaster is still going on." It was more like, "Here we are two months in, and look at this president: He's carrying on as if it's still week one. Where is the leader we were promised?"

Stewart's introduction to the piece described Obama's address to the nation as "the prime-time speech that we so desperately needed."

"I'd like to lay out for you what our battle plan is going forward," said the president in one of the clips.

"You heard the man!" Stewart bellowed. "We are at war! With an inanimate object. Oil. We've already got the poster ready to go." Cue a graphic of a petroleum-soaked pelican in a Stars-and-Stripes-emblazoned straw boater hat, the image bearing the caption, "I WANT YOU TO WASH ME."

What "The Daily Show" is doing here -- as it does so often and so well -- is attacking not just a particular action or policy but the shyster packaging that surrounds it, packaging that's meant to deflect our attention away from the unfortunate reality that certain crises explode out of nowhere, illuminating blind spots and delusions that we had collectively refused to admit we had and that we can't wave our hands and make it go away.

That Obama, who sold himself as a tough-loving, reality-based alternative to Republican thuggishness and mendacity, would embrace the "War on …" mentality strikes me as the true source of Stewart's disillusionment -- that and his forest-for-the-trees penchant for proposing long-range solutions to immediate problems, the executive branch version of handing a list of licensed local doctors to a man who's bleeding to death on the street. This president sold himself as something more than just another politician, and with each passing week that performance is becoming harder to buy. As one of Stewart's comedic heroes, George Carlin, once put it, "Anything here in America we don't like about ourselves, we have to declare war on it. We don't have to do anything about it, we just have to declare war on it … It's the only metaphor we have in our public discourse for solving a problem."

Stewart's remarks suggested (accurately, I think) that what the nation really wanted and needed was a frank assessment of the oil spill: how bad it was, how bad it was going to get, whether BP or the government could do anything about it in the short term, and if so, how long it might take. The lead "action" in Obama's report to the country was the creation of a blue-ribbon panel to study the problem and recommend long-term policies on drilling and environmental safety.

"Yeah, slow down, Patton," Stewart said. "I thought you said we were at war. It's battle, it's assault. You formed a commission?" He added, "At least he didn't leave himself vulnerable with a premature, self-aggrandizing photo op." Then the show flashed a photo illustration of Obama standing on the deck of an aircraft carrier under a "Commission Accomplished" banner.

The image's surface message was harsh enough: Obama's incompetent handling of the oil spill is a misstep that's different from, but ultimately equal in magnitude to, any of Bush's most grievous blunders.

But the subtext of the bit was even more devastating: A president who ran on a message of change, hope and frankness is looking more and more like just another goddamn politician faking the appearance of mastery. (Stewart's approach is more effective than that of his colleague, Stephen Colbert, because it's more direct; Colbert's lampoon of a Faux News rabble-rouser is still funny, amazingly enough, but the performance aspect puts a layer of insulation between the show and its points.)

When, exactly, did Stewart start to turn on Obama? I think it was almost exactly one year prior to his "Strife Aquatic" segment: July 15, 2009.

"Last night, Obama threw out the first pitch at the All Star game," Stewart began. "He even played shortstop for a time. There’s nothing he can’t do ... except create jobs.”

Here yet again an obvious, Jay Leno-style quip was just the outer layer of a deeper and more bitter expression of dismay. What really seemed to chap Stewart's hide wasn't Obama's inability to revive an economy that was nearly bled to death by his predecessors. It was the lurking fear that Obama might turn out to be less a visionary do-gooder than one of those charming, eloquent men who had a knack for looking busy without actually doing anything.

On that same program, Stewart did a bit about healthcare reform that called Obama out for hypocrisy, showing a clip of the president insisting he wasn't interested in pushing a single-payer healthcare system, then following it with 2008 campaign clip in which Obama declared, "I happen to be a proponent of single-payer healthcare." Just as the All Star joke wasn't about Obama's inability to put America back to work by snapping his fingers, this joke wasn't about the merits or drawbacks of any particular scheme to fix healthcare. It was about honesty and leadership. It was about saying you believe one thing, then claiming to believe the opposite while pretending you never held that first position. We've always been at war with Eastasia.

"The Daily Show" has also dedicated itself to pointing out the ways in which Obama has continued or magnified some of Bush’s worst policies. The program’s June 15 edition featured a segment highlighting similarities between the two presidents, and contrasting the pre-inaugural Obama with his same-named successor. Stewart’s commentary was built around an extended comparison of political chicanery and a street-corner hustle. At one point it flashed a graphic depicting Obama as the needy, power-mad Cartman from "South Park."

"Mr. President," Stewart asked, "does this guy know what you're doing?" Then he cut to 2008 footage of then-candidate Obama promising to "set an example that the law is not subject to the whims of sudden rulers, and that justice is not arbitrary." "What happened to Barry from the block?" Stewart asked.

That's what elevates Stewart above his unfunny right wing mirror-shadows on Fox News Channel. A true satirist, and a true patriot, takes no prisoners; he stands for certain values and judges others not by whether they agree with him point-for-point, but whether they can go toe-to-toe with the satirist in terms of consistency and honor.

What "The Daily Show" stands for isn't the nightly fortification of one party's base. Stewart is a liberal and so are his writers and producers, but the program's most blistering humor has little to do with bolstering liberal viewpoints or tearing down their opposite. It's about accountability. And it’s about the public’s yearning for real leadership, a yearning that has been engaged and then exploited by generations of Democrats and Republicans that have more charisma than substance. As Chris Rock said in his "Bigger and Blacker" special, in a routine decrying the absence of any African-American leaders with a fraction of the Rev. Martin Luther King's unifying power, "I want a motherfucker to move me ... We need a fucking leader, man. "

Stewart's attacks on Obama have a Rock-like undertow of angry sadness. If you take a close look at the last few weeks' worth of "The Daily Show," you realize that Stewart's true foe isn't Barack Obama, any more than his pre-2009 target was George W. Bush. Obama, like Bush before him, is merely the human face on Stewart's real target: Partisan complacency -- the tendency, encouraged by the intellectual gated communities of cable and the Internet, to loudly proclaim one's political and intellectual independence while regurgitating talking points from left, right or center, pausing just long enough to take tiny, pathetic, mostly symbolic digs at random people on your team in order to playact integrity (aka"Doing the O'Reilly.")

This approach is not risky, patriotic or even especially honest. And whether it's practiced by Glenn Beck or Keith Olbermann, it's a rhetorical shell game, an elaborate way of evading the deeper, more pressing issue, which is that Americans are increasingly inclined to live inside private echo chambers, and that when a people have collectively decided to live like that, they have condemned themselves to relive the same crises and disappointments over and over in different guises.