Does Jerry Brown have a Bill Clinton problem?

He could sure use the former president's help this year. But getting it could be a tricky matter 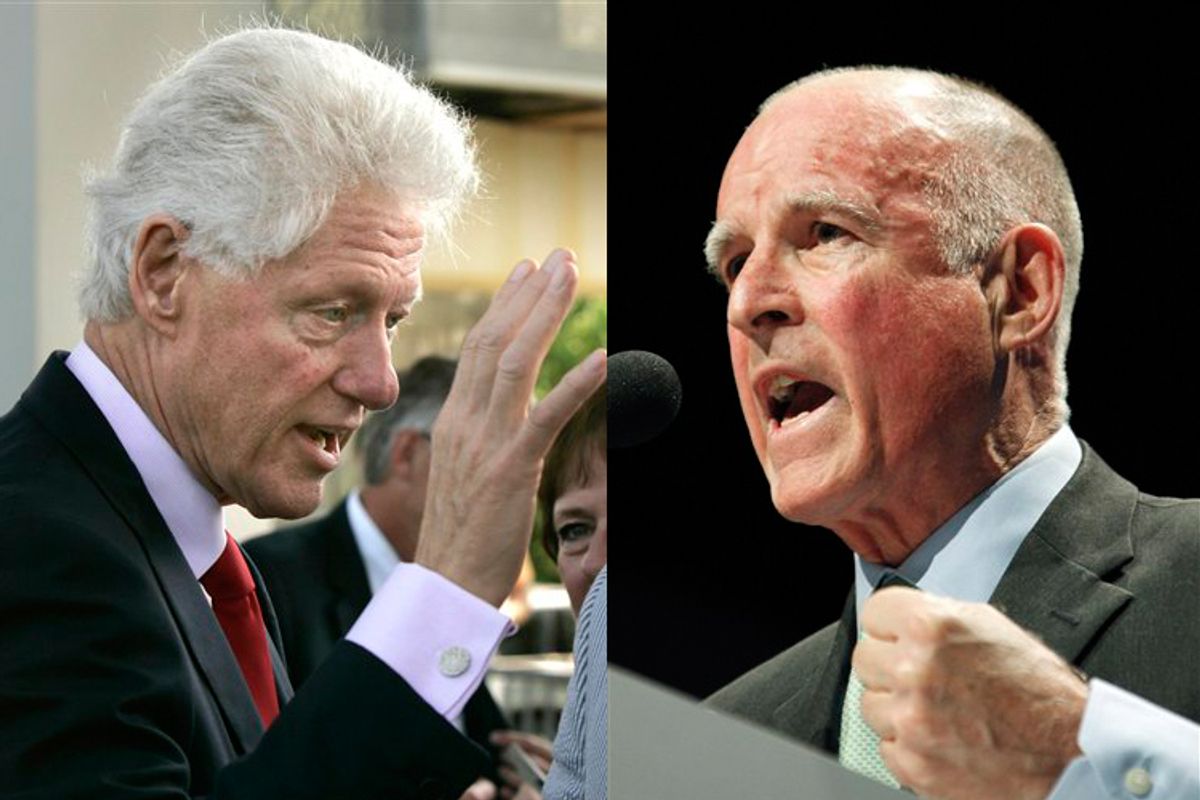 Bill Clinton was in Pretoria today taking in the U.S. soccer team's last-second win over Algeria, so he probably missed the newest Web ad from Meg Whitman. But, even if he can't admit it publicly, he'll probably like it when he hears about it.

The one-minute spot features footage of Clinton dissing Jerry Brown, Whitman's opponent in the California gubernatorial race, back in 1992, when Clinton and Brown both vied for the Democratic presidential nomination. "You know," Clinton says, "he reinvents himself every year or two."

Actually, that was one of the tamer things said between the two men back then. Only junkies remember it now, but there was a two-week period in the spring of '92 when Clinton vs. Brown riveted the country.

Paul Tsongas, who had scored an early win in the New Hampshire primary only to be swamped by Clinton's money and regional advantage in the South, had suspended his campaign, and Clinton -- with a massive delegate edge over Brown -- appeared ready to coast to the nomination. But then, in what remains one of the bigger presidential primary surprises in history, Brown stunned Clinton in Connecticut on March 24. Suddenly, Clinton was in grave danger, with pundits speculating and party leaders fearing that his Gennifer Flowers/Vietnam draft baggage was prompting a last-minute backlash from the party's rank-and-file, who figured he'd be a sure November loser.

This set up a do-or-die moment for Clinton in the April 7 New York primary. With a win, he'd put the intraparty doubts to rest. But if he lost, the floodgates would open: Brown would have significant momentum, Tsongas would reenter the race, and party leaders would begin recruiting a last-minute "white knight" -- Mario Cuomo and Bill Bradley were frequently mentioned.

The friction between Clinton and Brown was obvious. Both had been political boy wonders in the '70s, Brown capitalizing on his legacy status to win California's governorship in 1974 and Clinton working to make a name for himself in Arkansas. Brown went national first, making a late charge in the 1976 Democratic presidential primaries and certifying himself as a star. But his career cratered after a dismal follow-up effort in 1980 and a failed Senate candidacy in 1982.

Meanwhile, Clinton, as Arkansas' governor, methodically worked himself into the national conversation, passing on a White House bid in 1988 before finally jumping in. Clinton's establishment support, massive war chest, and front-runner status irked Brown, who (after spending some of the '80s in India working with Mother Teresa) had decided to run for president again, this time as a crusader against the system.

When it became a two-way race, Brown's blunt attacks infuriated Clinton. In one debate, Brown accused Clinton of "funneling (state) money to his wife's law firm for state business." Clinton replied: "You ought to be ashamed of yourself for jumping on my wife. You're not worth being on the same platform as my wife."

"I feel sorry for Jerry Brown," he continued. "I served with him as governor in the late '70s. He asked me to support him for president once."

"Did you?" the moderator asked.

It was in elaborating on that point that Clinton offered the "he reinvents himself every year or two" line that Whitman is now recycling.

It's hardly uncommon for primary campaigns to get heated. But the Brown-Clinton race is different because they never even tried to make peace. After Clinton hung on to win New York and the press decreed him the presumptive nominee, Brown stayed in the race -- all the way to the July convention in New York. Told by the Clinton campaign that he would have to endorse his foe in order to address the delegates, Brown refused -- and then had himself nominated from the floor, which allowed him to speak for 20 minutes. He left New York without endorsing Clinton, who was content to ignore Brown in the fall.

Not that he ever forgot the grief Brown gave him. Last fall, Clinton made sure to endorse Gavin Newsom, the San Francisco mayor who was then running against Brown for the Democratic nod in California. (Newsom then dropped out to run for lieutenant governor instead.) Surely, he can't be too upset that he's now being used in an attack on Brown, even if it is from a Republican.

The real problem for Brown, though, probably isn't Whitman's ad (and any others like it that her campaign might make); it's the potential absence of Clinton from the California campaign trail this fall. Sure, the former president -- who is on quite a campaign roll this year -- might go to bat for Barbara Boxer in her Senate race. But Jerry Brown? It's fun to imagine, but not so easy to see happening.