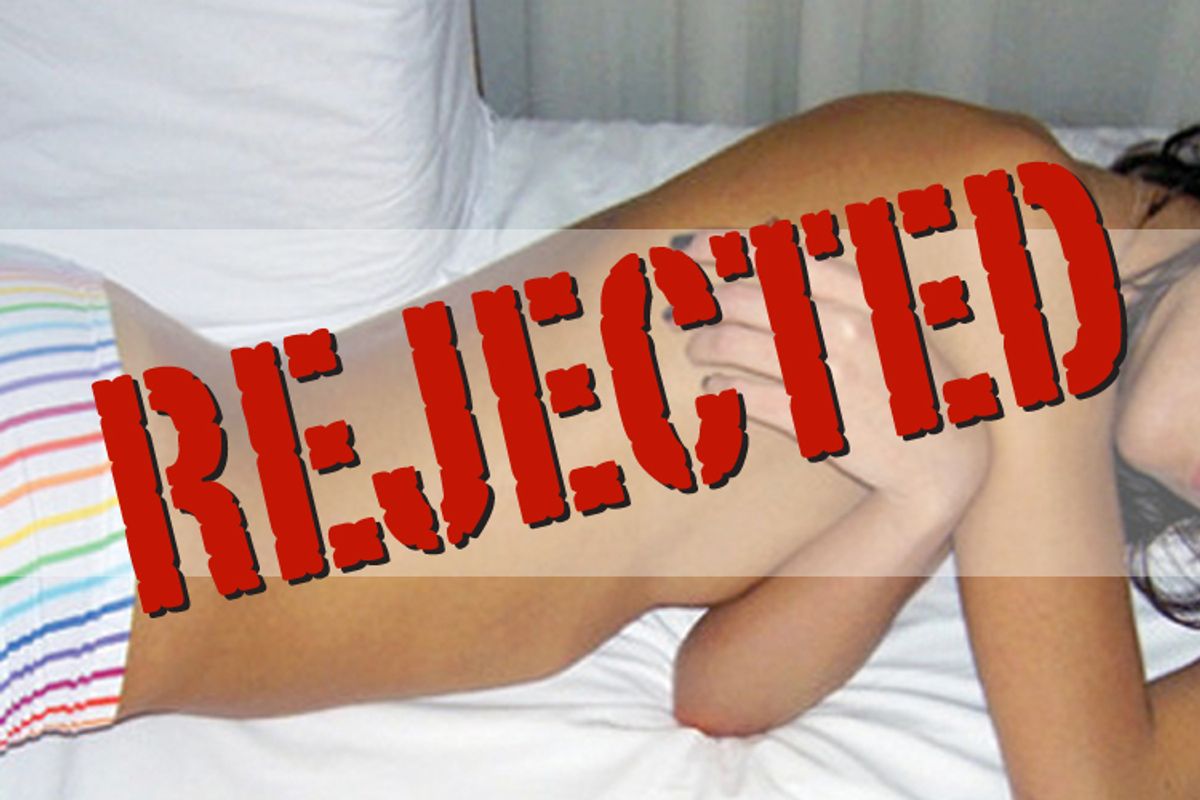 From the first time I stepped through the impeccably white doors at an American Apparel near my college apartment in San Diego, I've had a conflicted, guilt-ridden love affair with the place. Not so much a store as a fashion playground, American Apparel had an interior so beautiful it made me feel comparatively drab, like maybe I wasn't even cool enough to be considering its wares. Oh, the soft, simple sweat shirts and leggings calling from their hangers, a Technicolor bouquet of possibility. The baffling dresses that claimed to be 14 styles in one -- the way they required an instructional video, in which a birdlike model demonstrated each dress-contorting technique, some of which seemed to suggest that leaving one's breast exposed was a hot new dress style. The endearing insistence that gold lamé was an appropriate material for a swimsuit.

As the child of two ex-hippie, union-proud parents, I also appreciated American Apparel's political stances, which they hawked almost as enthusiastically as their hoodies. The "sweatshop-free" label is hard not to support, and I nodded approvingly when I noticed T-shirts broadcasting progressive views on immigration policy and gay rights. But for the past few years, every time I've forked over my hard-earned money for, say, a $30 skirt made from a single yard of material, I experienced a gnawing feeling of regret -- and it's not just because I'm broke. You see, up until recently, I had been avoiding a deeper truth about the company: From its advertisements to its hiring policies to its CEO, everything about American Apparel is sexist, seedy and seriously offensive. So, as of this week, I'm quitting cold turkey -- and I'm not the only one. As the company grapples with credit problems, messy management and bad P.R., American Apparel appears, for the first time, in danger of going out of fashion.

Currently the largest clothing manufacturer in the United States, American Apparel opened its first retail store on Los Angeles' Sunset Boulevard in 2003, after a few years as a wholesale T-shirt supplier for uniform companies and screen printers. Less than two years later, there were 53 stores in five countries; CBS called it "the fastest retail roll out in American history." It's not hard to see why the company was so successful: Its marketing campaign, positioning American Apparel as the clothing store of do-gooders, was both timed and targeted perfectly. A generation (mine) had just hit their early 20s and was growing more concerned (some would say self-important) about how and where they made purchases, about their roles and responsibilities as conscious consumers. We were teenagers when both name-brand obsession and awareness about the overseas sweatshops at work behind $300 Nikes reached their apex. American Apparel's clean, simple aesthetic appealed to those of us who never wanted oversize Adidas anoraks or Old Navy bikinis in the first place. We were middle-school misfits, the kind of kids whose identity was forged by a childhood craving to belong, followed by an adolescent rejection of that conformity. (I have no idea where today's equivalent 13-year-old shops. Hot Topic, maybe? I'm clearly out of touch.)

And so, in its early boom years, American Apparel-wearers formed a kind of outsidery in-club. Like the after-after party that only the coolest kids knew about, their clothes were a subtle indication that you were different from the girls in the Gap T-shirts -- and by different, you meant hipper. You were broadcasting that you likely had overlapping interests with other American Apparel-wearers: Hey, you like David Bowie too? Do you ride a bike? Should we go on a bike ride and talk about veganism and then go buy some vinyl?

Of course, all clothes are a way of branding oneself. But much of American Apparel's success can be attributed to the canny marketing of its product as an earnest alternative to that brand identification, the genius of unbranding. Even for customers who saw through that bullshit (and I would argue there weren't many, in the beginning, who even thought about it), there were other reasons to recommend shopping there. For one, the well-known fact that all the clothing was made in a factory in downtown Los Angeles surely meant that we were supporting fair labor practices. Right?

Only, um, not -- unless you call being regularly verbally abused and sexually humiliated by your boss "fair." The past five years have been a public unraveling for founder, CEO and noted creep Dov Charney, starting with a highly publicized 2004 article in (now defunct) Jane magazine in which he repeatedly masturbated and received oral sex from a female employee in front of reporter Claudine Ko. Charney closed out the decade having been sued by his employees for sexual harassment on at least five separate occasions, for charges ranging from exposing himself to telling area managers to hire young women with whom he could have sex, ideally Asians.

All of which would be disturbing enough. But then there is the most recent controversy, in which disgruntled former employees leaked internal documents about nauseating hiring practices and employee "grooming" standards to Gawker -- including comments about which "type" of black girl is appropriate to have working at the store -- all of which paints a sordid picture of a company whose entire corporate culture is dominated by misogynistic, overgrown-indie-frat boy attitudes about women and sexuality, from policing haircuts to doling out raises based purely on sex appeal. (Additional revelations include the ominous detail that company whistleblowers are hit with a gobsmacking $1 million penalty.) No one who's ever seen a typical American Apparel billboard -- filled, as they usually are, with images of disembodied female torsos and asses -- should be surprised by this breaking news. If Tommy Hilfiger wants to define "sexy" as preppy white college kids lounging around on a yacht in the Hamptons, American Apparel wants "sexy" to be emaciated, ethnically ambiguous, suspiciously pre-pubescent girls who look like they were shipped here to be sex slaves, and just crawled out of their crates into headbands and fishnet leotards. Which is to say: Does anyone wearing American Apparel really think they're sporting the badge of the awesome progressive shoppers club anymore? That they're being "alt"-anything? Do the strides the company has made toward fair labor standards outweigh the other kinds of exploitation it regularly practices?

Charney's alleged abuse notwithstanding, the company isn't really doing anything illegal. By federal law, hiring practices that discriminate based on race, gender, height, age and disability are prosecutable; picking employees based on how attractive they are -- or, as Charney likes to put it in his standard self-defense statements, how good their "style" is -- is perfectly fine. That's not likely to change any time soon. (And it's surely not limited to American Apparel.) The billboard-size crotch shots that currently punctuate my morning commute each day in New York aren't likely to change either.

One thing that can change? The company's reputation as socially progressive -- and its reign as clothing retailer-of-choice among people who pride themselves on supporting responsible businesses. For me, the sketch factor has finally begun to outweigh the positives. Sorry, Charney. A few nice political stances don't cancel out a corporate culture built on misogyny.

There are signs the sleaze-tastic empire is losing its edge: With 285 stores in 20 countries, American Apparel reported major losses for the first time ever in the first quarter of this year. Last year, concerns over potentially illegal workers resulted in a punishing 1,500 layoffs. And the store is currently renegotiating a loan with a British equity firm that got it out of hot water with creditors in 2009. Imported competitors like H&M and Uniqlo are homing in on the company's target market, and some analysts say there's a real chance that American Apparel could go under -- but things will probably get a lot wackier first. On Wednesday, in conjunction with BUTT Magazine, it unveiled a new X-rated beach towel collection, a summer accessory Martha Stewart probably won't be recommending any time soon. (They go great with gold lamé!)

As for me, I won't be sporting one on the beach this year. My protest is simple: to stop shopping there. So whatever happens to the company, I'll be watching from the sidelines. Or, rather, from outside those impeccable storefront windows, as I stroll by without going in. And I expect to feel a little cleaner for it.

Emma Silvers is an editorial fellow at Salon.