When life is tough, baking makes it better. Losing a job means it's time to finally learn to make my old favorite 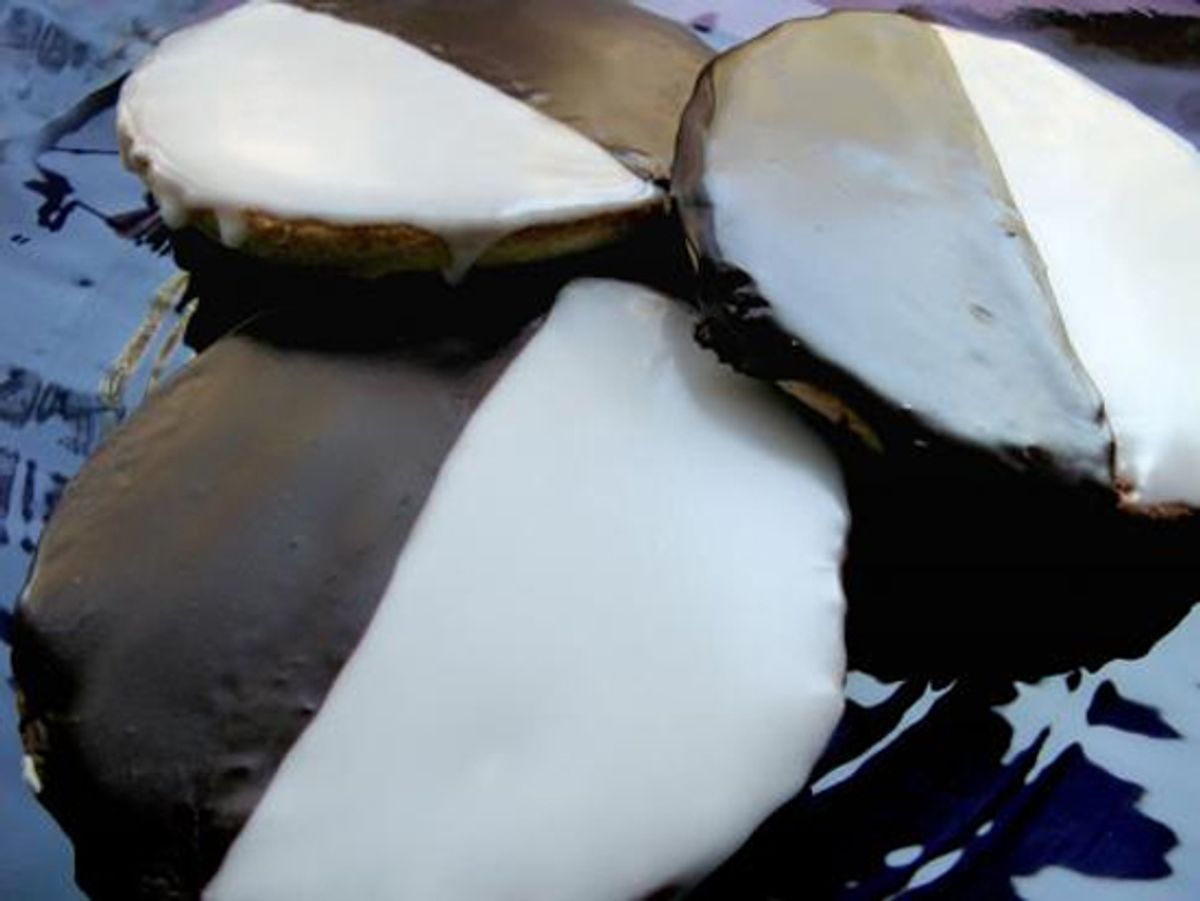 When life gets challenging, I retreat to the kitchen and bake. I've been baking a mountain of confections and feeding our neighborhood since we found ourselves in the growing ranks of the suddenly unemployed two weeks ago. And whenever I listen to the news and hear some talking-head cheerfully report that the economy is improving, it merely means another baking flurry is about to commence.

Yesterday I decided to bake with purpose, tackling my holy grail of childhood memories: Snowflake Bakery's Half Moon cookie, which most people call black and white cookies.

Converting my Baking Hero Milt Ziegler's commercial recipe for the home kitchen took a certain amount of faith and a very competent geek who happens to have some spare time these days -- I mean, when you start with 15 pounds of cake flour, you have to do a lot of math to get it to fit in a home Kitchen-Aid mixer.

There I was, biting my lip, double checking my math with a calculator, hoping I was not making a mistake. From over my shoulder there was suddenly the sound of Pink Floyd's Money in the form of a tiny hum coming from the Geek. Math word problems give me hives and a headache, and my pencil paused, waiting in air. He let out a small but audible "ah ha," and I heard his footsteps receding to the kitchen. I followed.

A few moments later, reading glasses perched carefully on his nose, he squinted and leaned in to watch the numbers shifting in my test beaker filled with water -- I'd taken to using visual aids to help me out with the math -- and suddenly, he was dropping in whole eggs, one at a time. Rising up from that stooped over, back-aching bend, he grinned and said, "Two large eggs and a half cup of milk." I checked. He was right. One fancy spreadsheet later I had my recipe.

I've auditioned many black & white cookie recipes through the years trying to duplicate the Snowflake Half Moon Cookie memory from my childhood. Alas, not a single one came close. Until now. My adaptation of Uncle Milt's Half Moon recipe is the best version I've ever made, and, well, it helps that it's the original recipe of the cookie I had as a kid.

There isn't a week that goes by that I don't pass a bakery in my neighborhood and wish it were Snowflake. After a story I wrote on the bakery appeared in Salon's Food page, a Facebook group, Snowflake Bakery Memories, was created by Milt's son, Jeff. After just a couple of weeks almost 250 people have joined the group. Almost everyone wistfully remembers the fabulous Half Moon cookies.

The Facebook page is the closest we will get to Snowflake Bakery these days, but with Milt's generosity, now we can have a home version of the popular Half Moon cookie. Go ahead. Close your eyes when you take that first bite. It will take you all the way back to our wonderful Snowflake Bakery days.