McChrystal and WikiLeaks: A double standard?

Stanley McChrystal gets to walk away with a slap on the wrist. Shouldn't Bradley Manning get to do the same? 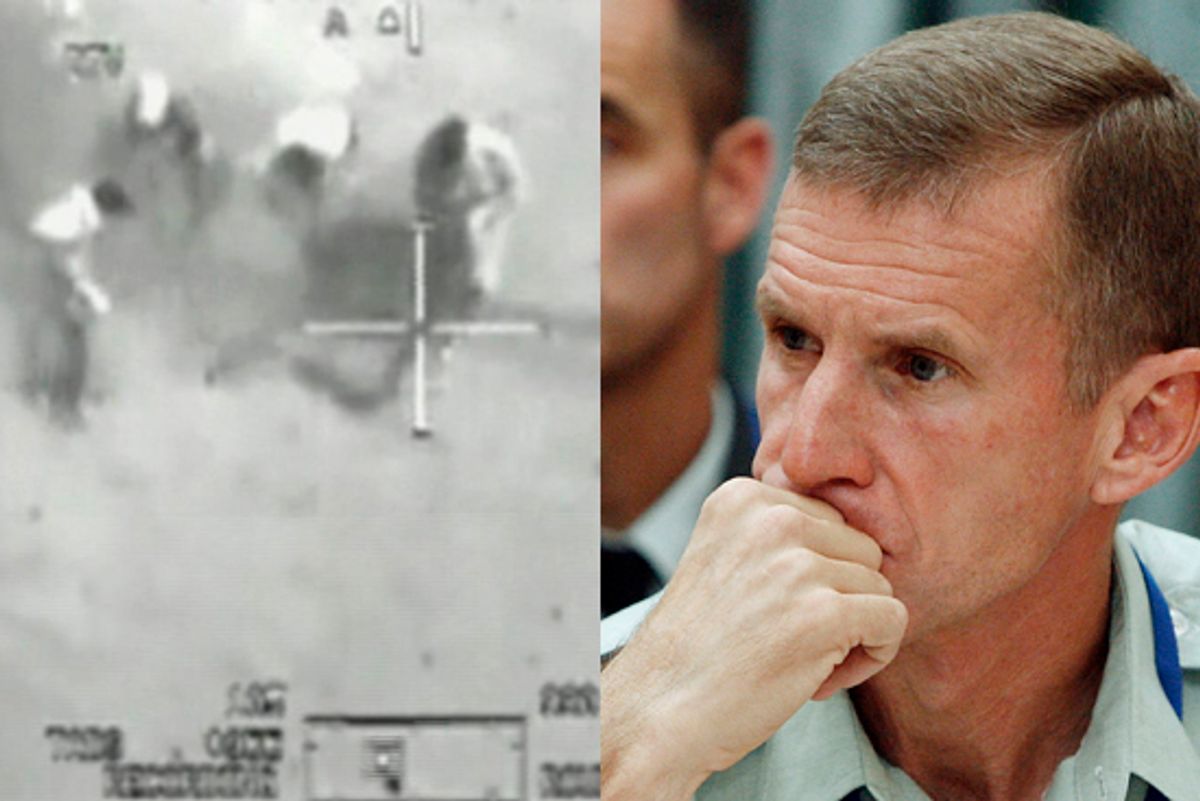 This image captured from a classified U.S. military video footage shows Iraqis being shot from an U.S. Apache helicopters that killed a dozen people in Baghdad, including two Reuters news staff on July 12, 2007, and released to Reuters on April 5, 2010 by WikiLeaks, a group that promotes leaking to fight government and corporate corruption. Reuters photographer Namir Noor-Eldeen, 22, and his assistant and driver Saeed Chmagh, 40, were killed in the incident. The helicopter initially opens fire on the small group. Minutes later a van comes by, and starts assisting the wounded, and the helicopter opens fire on the van. REUTERS/WikiLeaks/Handout (IRAQ - Tags: CRIME LAW DISASTER MILITARY CIVIL UNREST) FOR EDITORIAL USE ONLY. NOT FOR SALE FOR MARKETING OR ADVERTISING CAMPAIGNS (Â© Ho New / Reuters)
--

The dismissal of Gen. Stanley McChrystal and the military's detention of WikiLeaks source Bradley Manning seem to be unrelated stories, but one former Marine sees a double standard at work.

Jeff Paterson, the project director of Courage to Resist, an organization that supports "informed resistance" of those who have left or want to leave the Army, believes that Manning, the Army private who leaked a video of an Apache helicopter attacking civilians in Afghanistan, is getting a raw deal compared to McChrystal.

"Here's one case of your average rank and file soldier who is facing a crisis of conscience, with realizing what's really going on with this war on the ground ... he made the decision to actually throw his hat in the ring of public debate, to actually offer a critical critique of what's going on," Paterson said. "And now he's in jail ... and doesn't have the ability to just resign from the Army."

The 22-year-old Manning is being detained in Kuwait after releasing the video and "hundreds of thousands of classified State Department records," according to Kevin Poulsen and Kim Zetter's Wired article. Though he has not been formally charged, Paterson said he doesn't know if Manning will even be able to get a civilian legal defense.

"McChrystal has continued to do what he's done for the past decade, from the Pat Tillman coverup to criticizing the president, yet he has the opportunity to resign," Paterson said. "It's substance versus fluff."