On BP, Obama makes the pundits look like fools

As commentators fussed over the stagecraft of his BP speech, Barack Obama delivered -- big-time 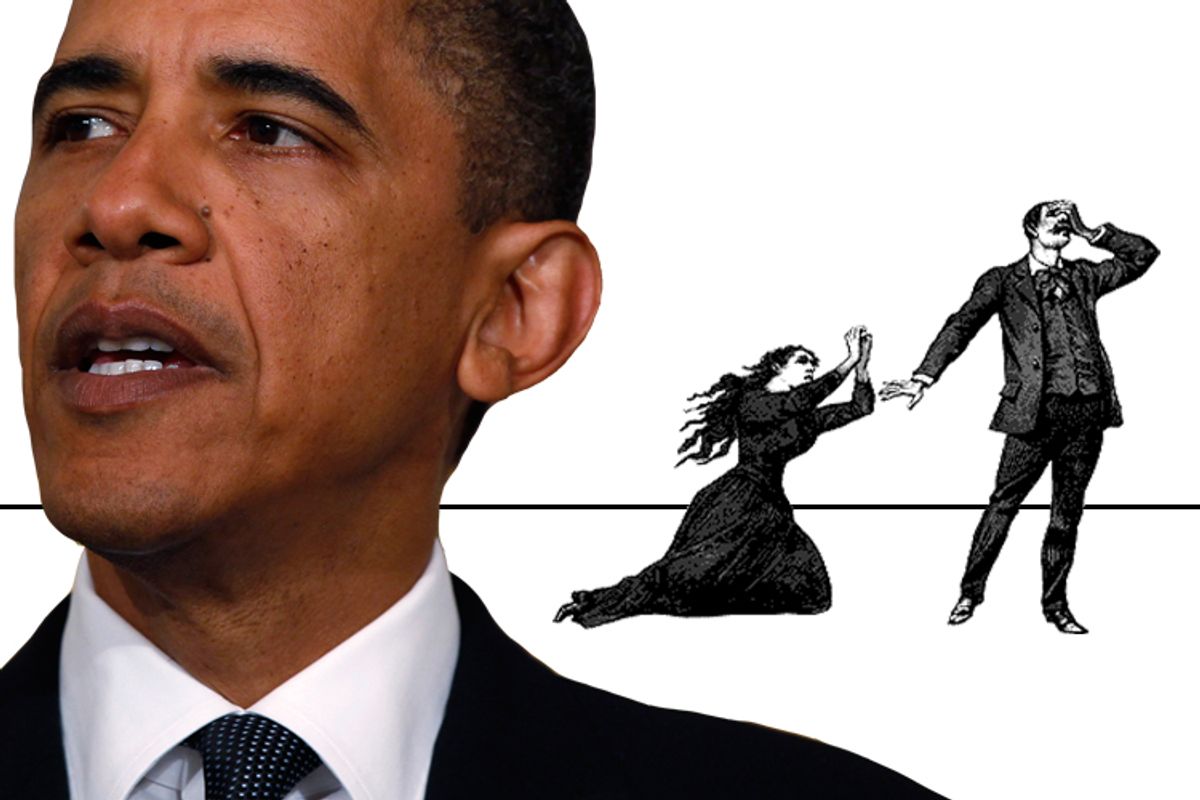 This just in: Barack Obama is not a superhero. He can't plunge into the Gulf of Mexico to seal BP's underwater oil gusher with heat vision or super-breath. Unlike Superman, he can't fly around the globe from west to east faster than the speed of light, traveling backward in time to fire the knuckleheads running BP before its doomed drilling rig exploded. Even Ronald Reagan couldn't do that.

The presidency isn't an action/adventure film, or even a reality TV show. Yet watching the national political media reflexively turning a complex tragedy into a simplistic melodrama, it's easy to wonder how many Americans actually understand that.

We've become so accustomed to seeing politics as soap opera, i.e., as dramatic narrative whose featured characters strut, pose and scheme against a backdrop of iconic monuments -- the White House, U.S. Capitol, etc. -- that the Washington press functions more like TV critics than reporters or analysts. To many, it's all about personalities, "narratives" and "scenarios."

Even MSNBC's Keith Olbermann and Rachel Maddow, who as recently as 2008 insinuated that all criticism of Obama derived from racism, swung away. Maddow delivered an address of her own, posing before an Oval Office backdrop and blithely proposing to fix the nation's energy and climate problems by executive order -- a constitutional impossibility.

An American president not only lacks superpowers, you see; he's also weaker than a European prime minister, unable to order his own party to pass legislation, much less to overcome a GOP filibuster by fiat.

Writing in Salon, former Clinton administration Labor Secretary Robert Reich denounced Obama's speech as "vapid." He found the president's verbs particularly weak. "Tomorrow he's 'informing' the president of BP of BP's financial obligations," Reich complained. "'Informing' is what you do when you phone the newspaper to tell them it wasn't delivered today. Why not 'directing' or 'ordering'?"

Of course, "informing" often means just that: telling BP exactly how it's going to be. Which was, as the nation learned roughly 12 hours later, precisely what President Obama did mean.

Pundits wanted action? They got $20 billion worth.

After what the New York Times described as "four days of intense negotiations," the White House announced that BP had agreed to put that astonishing sum into an escrow fund to be administered by Kenneth R. Feinberg, the universally respected mediator who ran a similar fund for 9/11 victims, to repay damages to Gulf coast fishermen and others harmed by the oil spill.

BP also ponied up another $100 million to pay workers idled by the current government moratorium on deep-water drilling. By any standard, it was an unprecedented act of presidential leadership. My guess would be that the perceived weaknesses in Obama's speech were caused by last-minute foot-dragging by BP; also that the "intense negotiations" included phrases like "criminal negligence," so clearly justified by BP's actions.

Doubters should be directed to Joe Nocera's New York Times business column "BP Ignored the Omens of Disaster," which describes negligence "so profound that everyone I spoke to in the oil business found (it) truly inexplicable." Indeed, the fourth-largest corporation in the world appears to have conducted itself like an 1890s wildcatter for years. Likely the acquiescence of the British government, as opposed to the London tabloid press, comes from knowing that the corporation's slipshod practices would never be tolerated in the North Sea.

Nevertheless, many pundits are loath to admit error. After the fact, many clung to crude psychoanalysis. "He's the emotionally maimed type who lights up when he's stroked and adored but shuts down in the face of acrimony," once-adoring Times columnist Charles Blow wrote of Obama. "Other people's anxieties are dismissed as irrational and unworthy of engagement or empathy."

Meanwhile, the president's $20 billion worth of empathy evoked near hysteria on the Republican right. See, it's all very well for GOP leadership to pretend that Texas Rep. Joe Barton's mad apology to BP for a "$20 billion shakedown" was a spontaneous outburst from a congressman who's received a reported $1.4 million in donations from oil and gas companies.

See, the passionless president had just struck a powerful blow on behalf of thousands of Americans who mostly didn't vote for him -- seemingly the last thing anybody in Washington wanted you to think about.

Arkansas Democrat-Gazette columnist Gene Lyons is a National Magazine Award winner and co-author of "The Hunting of the President" (St. Martin's Press, 2000). You can e-mail Lyons at eugenelyons2@yahoo.com