An underwhelming night on "So You Think You Can Dance"

UPDATED: The first idiotic elimination of the season, and this "heart form" takes a turn for the "huh?" 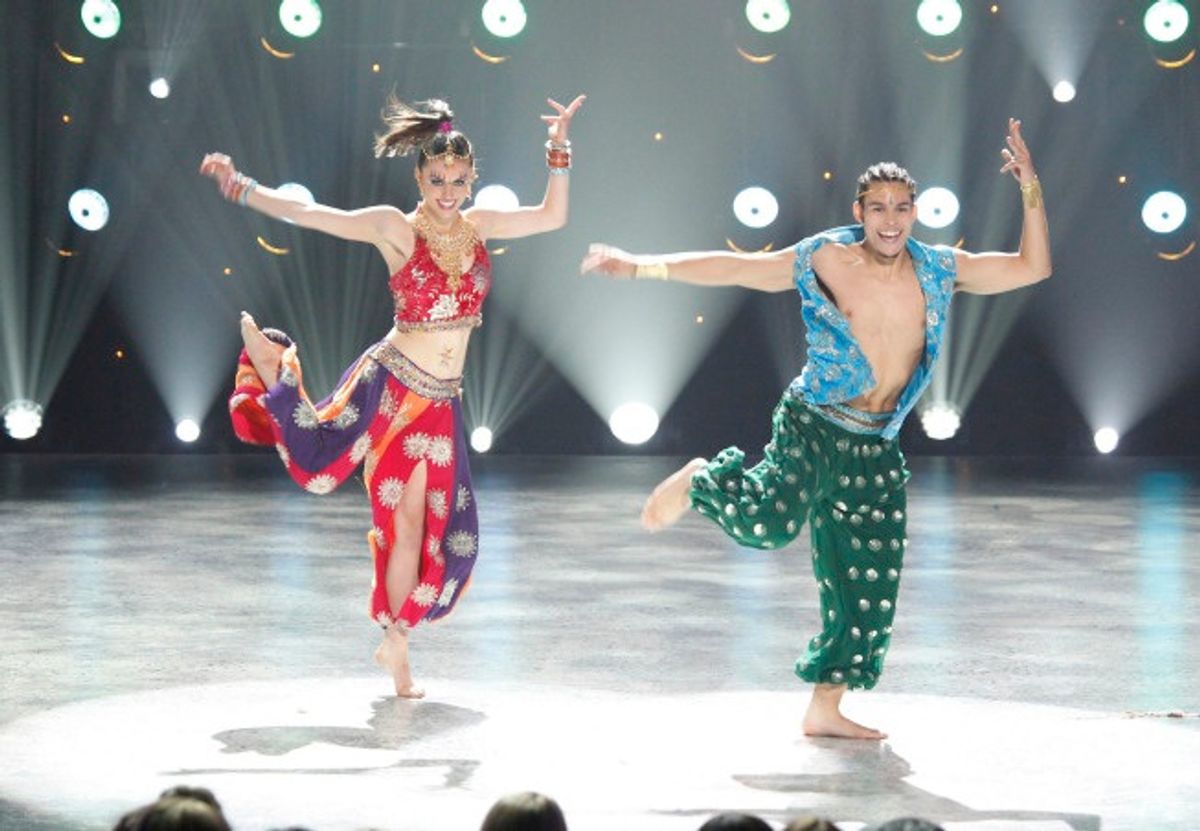 That's kind of where I am after tonight's "So You Think You Can Dance" performances. I can usually count on at least 30 percent of the numbers on any given "SYTYCD" show to thrill me in some way, whether it's nasty, on-point hip-hop or tear-inducing contemporary. I've even been known to shiver after an arousing paso doble (yes, I love the much-derided paso, give me that over a smooth waltz any time.) With a couple of notable exceptions, nary a hair on my arm stood up after Wednesday night.

I also disagreed with almost every single thing the judges said. From Mia asserting that she was wearing a "bedspread" (it was really more like a rat had stuck its nest to her front) to the notion that Robert wasn't in control of Anya during their Argentinean tango, this was one of those weeks that the professional dancers and the professional TV watcher (that's a thing!) weren't on the same page.

And it was right out of the gate, too: Cristina and Pasha had the potential to light each other on fire with a Jean-Marc Genereux paso doble, because the choreographer and his wife France can be almost pornographic with their creations. And I got strength from Cristina, I got intensity, but the lifts were rough and what dancing there actually was wasn't as graceful or steamy as I know she's capable of. Then Adéchiké and his visible over-thinking pulled me right out of his piece, despite his better physical chemistry this week with Allison (who is impeccable.)

I thought the judges were overly hard on Alex, whose Fosse-inspired Broadway routine with All-Star Lauren was a study in perfect unison. It was wonderful to see him having a little slinky fun, but I get Adam's point about not having enough "smolder" -- Alex needs to figure out how to dirty it up a bit. Melinda improved, although her arms still seem to make incomplete motions, and when I compare her to the other girls she feels amateurish. And what the hell was up with that dress? Distracting, overly literal (flowers, Mother Earth, get it?) and it made her look like a deranged parade float.

Costuming didn't really do anything for sweetie-pie Kent, either, but he is so much fun to watch it's almost a non-issue. His jazz number with the über-sexy Courtney showed us a little more of the animal in him, even though that kid radiates "I'm a virgin" purity to the heavens. He seemed genuinely surprised that he is now allowed to stick his face in a girl's crotch or grab her boob without getting his ears boxed. One complaint about this specific segment was the actual staging -- it was awkward, forcing Kent's back to the camera more than once. Although props to the director for finally figuring out how not to irritate me with all the crazy jumping around.

Billy and Jose had a lot of things in common this week: they were furthest outside their comfort zones, they both tried so hard, and I couldn't help but think "how cute is he?" when each was on screen. "Billy K. Buck" he was not, but when Bell's krump piece began, and he nailed those first hits, I wrote down "holy fu*@." Now, when that first crotch grab and thrust came, and he looked like an 8-year-old playing with his willy in private, my enthusiasm waned a bit. But that shouldn't discount what he pulled off. Same goes for Jose, and the judges were more forgiving of his street swagger during what should have been an electrifying and stamina-testing Bollywood routine.

On to the good! Ashley has the most beautiful limbs in the competition. And her hands! Her feet! Gorgeous. And not only were she and Mark aesthetically perfect for each other, but I felt them. Deeply. Their piece was the first of the night to fill me with any kind of emotion, and Ashley's joy was right there. Robert continues to surprise and delight, this time by being seriously, shamefully sexy. In contrast to Anya's pairing with Kent last week, Robert had the masculine presence necessary to make me think they might actually get naked right there. And his precision with the tricky Argentinean tango technique was stunning for a contemporary dancer. And did I mention the fanning myself? Because of the hotness? Even when Robert looked like he was counting out loud.

Out of all the dancers this week, though, I was most impressed with Lauren. She and Dominic were tasked with depicting an abusive relationship, tough business for a such a sweet and perky girl and one of the most popular past contestants the show's ever had. And while I agreed with Mia that their execution of the violence inherent in the choreography was more of a suggestion of abuse than a visceral representation, it was evident that both dancers crawled into that tiny dark space that we all have and let us watch while they did it. That kind of guts reaches the audience. It reached me. Plus Lauren was technically spot-on, her hits hard and her groove authentic.

Bottom 3 predictions: I'm going with Melinda, again, Cristina, and Adéchiké. I was only 1 for 3 last week, so don't take these guesses to Vegas.

Things I learned this week: Cat should wear white all the time, and a shorter skirt next week. Jose needs to figure out a way to let his natural hair out to play, because it. Is. Epic. The All-Stars staying on stage with their competitors through judging leads to a lot of sassy talking back to the panel, to which I say, awesome. Hearing a bunch of "woooo!" and "yeah!" during a piece on men beating women is like knocking down the fourth wall with an armed guerilla force. And during my independent study after the show I learned that Bob Fosse as the Snake in "The Little Prince" is likely a source of Michael Jackson's famous moves. Watch this mash-up of "Billie Jean" and Fosse's undulations from the 1974 film. Sweet.

UPDATE: "You have to be shitting me."

I thought about just leaving my update there, just ending it, too bothered and bewildered to actually process my reaction to the elimination of Cristina over Melinda this week. I had written Melinda's showbituary: Nigel trying to find a nice way to tell her she's fake, her "Bad Sandy" from "Grease" red pants, how she'd lost the flavor she had during auditions, what a shame, don't let the door hit you on the...and so on. Um, whoops?

I found the tension of the elimination a bit wan when I factored in Robert's supreme awesomeness. If that guy walked out on stage with some old-school Kriss Kross booming and proceeded to do the running man with a side of cabbage patch then flipped the judges off, he's not going home. And I'm pondering what it is about this year's girls that aren't getting the public support that the guys are -- even the un-buck Billy. Maybe it's the fact that girls (who vote in droves) are much likelier to choose with their dirty minds leading the way. Whether traditionally sexy or not, the boys are still boys. And occasionally half-naked and tightly-trousered boys to boot. Which also nails down another solid voting demo: gay men. Plus girls need more than an abbreviated audition process and a home visit from Mary Murphy to truly connect to another girl -- they (we?) can be particular that way. We like to see the girls interact with their dedicated partner for the first handful of weeks, by which time we evaluate them according to multiple points of reference before we bestow our affection (and our votes) on her. Only 2 winners out of 6 on "SYTYCD" have been female, Jeanine Mason and Sabra Johnson, and this season is shaping up to be quite the sausage-fest. But I would love to be wrong.

Further observations and detritus: I was hasty in my recap regarding Cat Deeley, who should wear black every week instead of white. With zippers. Thanks to Kent's family's signage, I now know that the words "Thank You Baby Jesus" strung together anywhere makes me giggle. Watching Bob Fosse made me realize what Alex was missing Wednesday: he needs to figure out a way to look like he's been smoking Cubans, drinking scotch, and wallowing in his own musk all day. I'm not sure he's cool enough, nor could he pull off the facial hair. Pop singer Debi Nova looked like a 10-year-old wearing inappropriate clothing standing next to Cat. As for the hypnotizing Brian Gaynor and Remote Control, check out the video to appreciate the subtle and stylized way the crew made every movement in concert with each other, like the mechanics of a perfectly balanced timepiece.