"Chastened": The joy of no sex

Hephzibah Anderson gave up intercourse for a year after her ex proposed to someone else. Here's what she learned 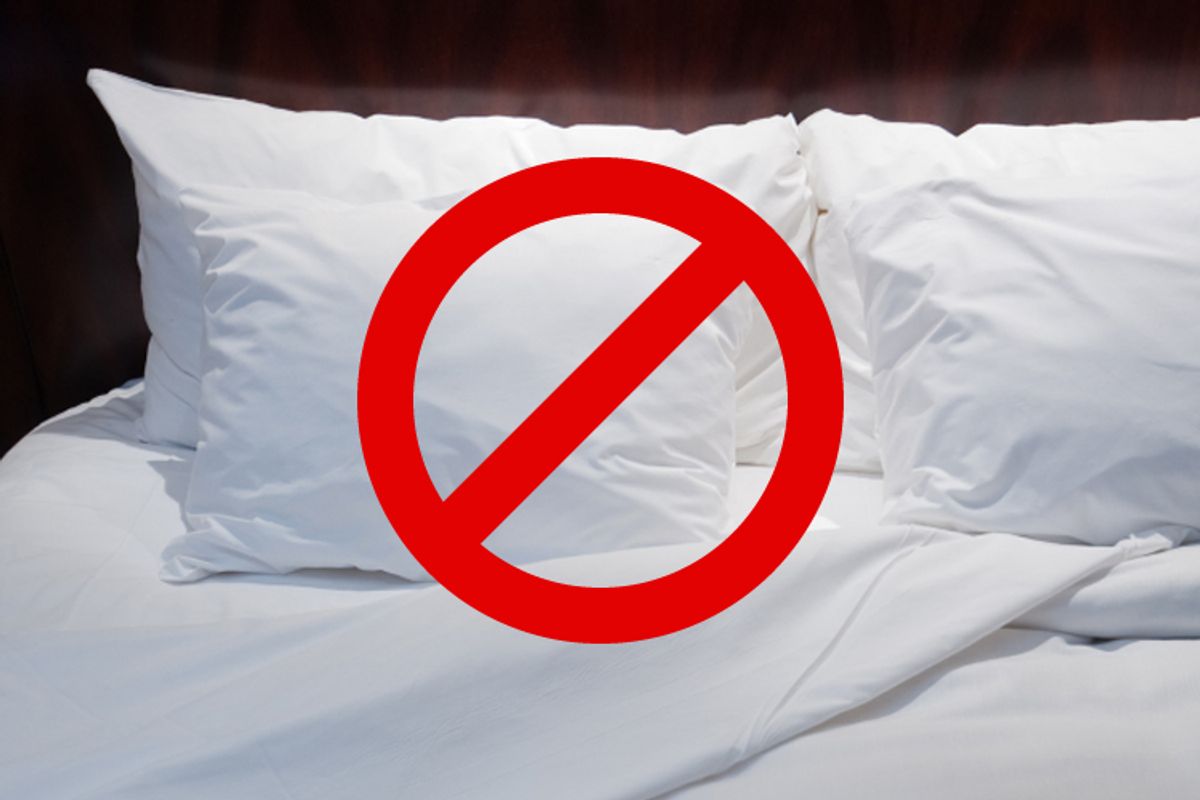 As her 30th birthday barreled down on her, Hephzibah Anderson happened to stumble across an ex-boyfriend -- her first love and the last to say "I love you" -- walking into De Beers with a blonde on his arm. When the pair walked out, they were engaged. It was a revelation: After several years of unsatisfying casual sex, disappointing dates and failed relationships, Anderson was no closer to finding lasting love. Having had her fair share of "sex without love," she thought "maybe it was time to look for love without sex." So began her year of abstinence, which she details in her new memoir, "Chastened: The Unexpected Story of My Year Without Sex."

It's just the latest of a slew of books about the virtues of chastity. The summer before last saw the publication of "Sexless in the City," Anna Broadway's memoir about abstinence until marriage,  a scientific(-ish) review of the harm casual sex allegedly causes young folk and some religious polemics against hooking up. The year before that, there was Laura Sessions Stepp's explosive conversation-starter "Unhooked: How Young Women Pursue Sex, Delay Love and Lose at Both." For such a wholesome genre, it's really gotten around.

So, you might ask: Do we really need yet another book about the joys of no sex? I certainly didn't think so. I've had enough of patronizing, self-righteous and judgmental sermons about my generation's sexual behavior -- but "Chastened" is something different. Anderson doesn't regret her past sexual choices. She is shameless, in the healthiest sense of the word, about the casual flings she embarked on throughout her 20s. Her year of abstinence isn't rooted in "sex regret," as Slate's Jessica Grose suggested in a piece about "the new backlash against casual sex," but rather what felt right to her at a particular moment in her life.

There is nothing sex-negative about the book, either. Anderson had no interest in denying her sexuality (in fact, she didn't restrict herself from all sexual activity) -- she was merely fed up with a "casual sort of intimacy without intimacy." She wanted more and could no longer pretend otherwise. "Rather than continuing to go along with what others seemed to want from sex, I had to rediscover what it meant to me," she writes. A large part of that was for sex to be "legitimately momentous again, rather than an inexorable conclusion given the right cocktail of time and place" -- and cocktails, of course.

The memoir draws a detailed map of Anderson's romantic journey through her 20s and into her 30s -- but the take-away isn't that young women should follow her exact course, but that we should each navigate our own route.

Salon spoke with the British journalist about "ladette culture," the sexiness of saying no, and dressing the part of the chaste.

Why did seeing your ex with his new fiancée inspire your year without sex?

For me, it underlined a lot of the frustration I'd been feeling but hadn't stepped back from or gotten enough distance from to really appreciate the impact it was having on my emotional well-being. It wasn't that I was looking back regretfully but rather that I was asking myself: Do I want to carry on this way? What should I be doing differently? Is this quest for love taking up far too much of my emotional and creative energy?

That puts it really well: You're not looking back with regret, you're growing and changing.

Exactly. I didn't want to blame anybody. I kind of wanted to reclaim some of my own emotional life and make a little more space in my heart.

At one point you wrote that admitting that "casual intimacy" was unsatisfying felt like "letting down the sisterhood." What did you mean by that?

Yeah, I did feel like that. I think that my generation, we're really lazy when it comes to feminism. Those battles are so distant -- we took all the gains for granted and it didn't occur to us that we had to educate ourselves about these freedoms and learn how to use them wisely. So what we ended up with was a very watered-down, women's mag-y take on feminism. In the U.K., there is a lot of posturing and what we call "ladette culture," which is all about posturing, has no sound feminist principles behind it, and, on top of everything, it isn't even very pro-woman.

You didn't actually abstain from all sexual behavior, though. You just declared "last base" off limits.

One of the things I wanted to do -- I didn't want it to be a one-off stunt. Certainly there was no idea of the book at the beginning of this project. I really wanted it to be a chance to find a workable way of looking for love that would be a bit less of a roller coaster, a bit more graceful, a bit more grown-up, I suppose. That whole Kleenex routine, the sobbing? It's a bit tired.

How did you define your rules specifically?

They were very personal rules, and that was the other important element of this quest. I really felt that sex isn't personal enough for any of us, and on all sorts of levels we're bombarded with all this visual imagery of how sex should look. I had a sense that the pace of courtship isn't necessarily set by either person in that relationship. There were situations during my 20s where sex had been the outcome partly because it felt like circumstances had dictated it. So I wanted to personalize sex again. I just drew the line at the point where I felt I always got more involved than I'd intended to be, and where I began to feel a little bit less in control and I was needing more from whomever I was involved with.

You devote an entire chapter to sartorial concerns. How was your wardrobe relevant to this pursuit?

Well, I think I was sort of in step with the natural world at the start. It was late summer, so the world was cooling down, and the wardrobe season was changing anyway. I just wanted to externally mark this change that I was hoping to make inside. They were very subtle changes. It wasn't just donning long sleeves and full-length skirts. I was looking for something a bit more sophisticated and clothes that weren't going to wear me.

Right. It seems like you were really kind of consciously battling with this desire that I think most of us have to be validated through other people -- by attracting other people.

Yeah, it is difficult. And you can be as aware of it as you like, and you still somehow need it.

How was that during this whole year? Did you struggle with that?

The year certainly made me aware of it, and the extent to which I courted that attention. On the other hand, by the end of the year, I felt I'd gotten a lot closer to the people around me -- but in order to do so I had to hide myself away. And there were certainly moments when I felt like for all intents and purposes I might as well have been in a nunnery because I really sensed that it was about finding space, and definitely tranquility, a kind of emotional tranquility and a kind of tuning out some of the chaos.

How is it that, as you write, abstaining from sex actually kind of made the world a little sexier?

Do you think that sex can sometimes be a good way to discover whether you have  a deeper connection with someone?

I think that we are far too willing to rush to write things off as being "just sex," and I think that where there is a profound physical connection, that does suggest something deeper. Those profound physical connections -- they are profound, and there is almost a spiritual dimension to them, but we're so prepared just to say that it's just human nature and biology. It's a real shame, it really undermines and devalues sex. I think that a lot of people miss some potentially really rich connections by telling themselves that it is "just sex."

Does it bother you at all that women are still charged as the sexual gatekeepers, that we're expected to be the ones who are stronger and say no, and "let's wait and allow this relationship potentially to develop"?

I did a Q&A about the book in the U.K. and there was a line of men in their early 20s sitting in the front row. At the end, they all essentially told me the same thing: We would really have loved to have savored those early days and slowed the pace a little, but our girlfriends were really rushing with us. So I suppose that's an instance where those women had taken a very different role. As much as we women complain that we're trapped in sexual "good" or "bad" roles, it's also very hard for men as well. It's a lot easier for a woman to say no to sex, but for a man to say no in any circumstances, it's just considered a little weird.

I really hope that it is, because if it's not, then we've made no progress at all. One of the things I really wanted to do in this book was not to advocate a return to anything, and instead to say that if we really think that we have sexual equality, then surely that means that we should be able to express every facet of female sensuality and sexuality, rather than just feeling like we have to conform to this male vision of sexuality.

So where are you now in your life, having written a book about your year without sex?

Well, it has certainly changed the way I go about dating. I'm a lot more assertive, actually. There were many things I learned during that year. I have never thought of myself as being passive, but I think in certain situations I kind of was. And now I have a much clearer idea of what I need and what I want and what works for me, and I'm absolutely happy about asking for that. Overall, I think I gained a lot of perspective, and this hunt for that one meaningful relationship, it's still ongoing. But it occupies a much more reasonable section of my life.

Exactly. There's a lot more romance, dare I say. I suppose I do feel slightly more in control of it, although I am perfectly willing to concede that this is an area of our lives in which none of us really has much control. At some point, you've got to surrender control.