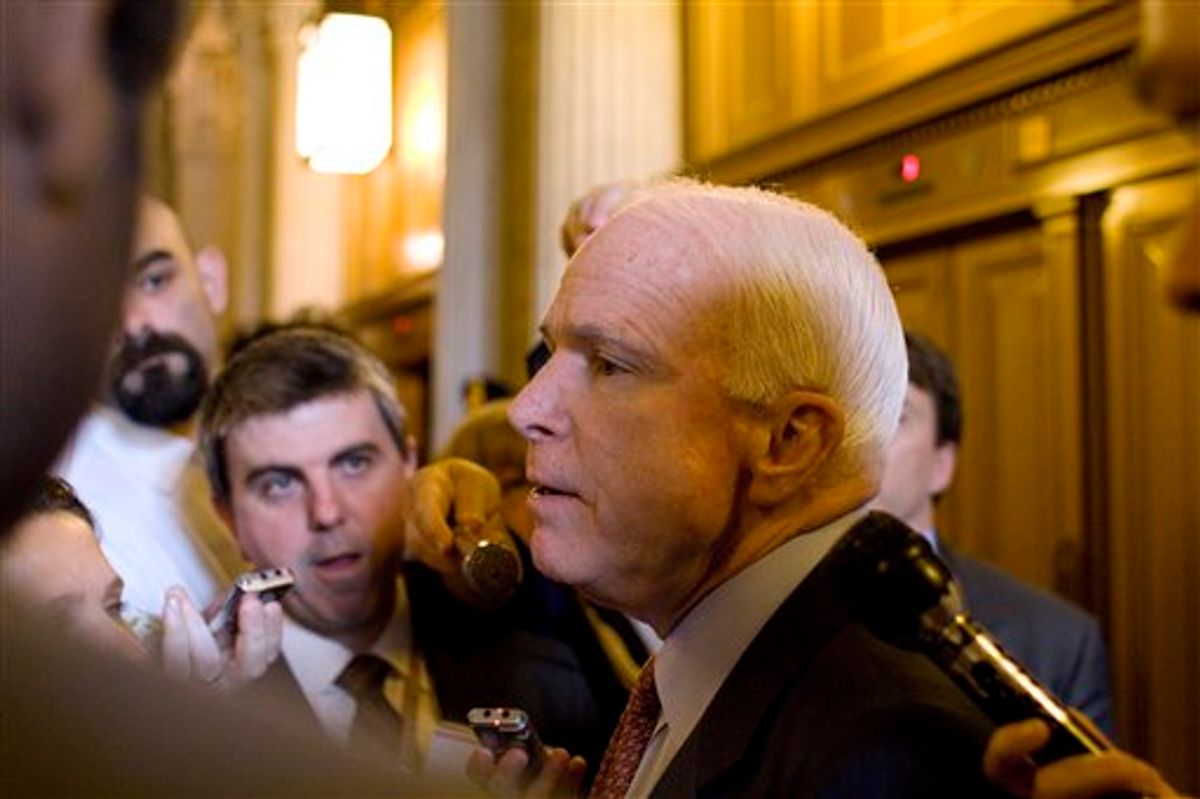 FILE - In this May 4, 2010 file photo, Sen. John McCain, R-Ariz. speaks to reporters on Capitol Hill in Washington. With the scrawl of a pen, Arizona Republican Gov. Jan Brewer awakened a dormant _ but politically explosive _ issue of illegal immigration, sending shock waves across the political spectrum in an election year when both parties had hoped to sidestep the topic. Two months after Brewer signed a new Arizona law instructing police to demand proof of a questionable person's legal status, voters have refocused on a topic that had faded into the background after Congress failed to overhaul the thorny immigration system in 2007. (AP Photo/Harry Hamburg, File) (AP)
--

McCain's column was about how we need to support democracy in Iran. Zakaria's column said McCain was irresponsibly pushing for a military engagement with Iran. Wieseltier's column is... well, he thinks Zakaria hates freedom and democracy and loves Ahmadinejad, and also liberals are so terrible these days because they don't have the balls to hate Iran, which is a terrible dictatorship that must be stopped.

Also, Wieseltier's mad that Zakaria thinks McCain wants a war with Iran. No one wants that! Except that this column reads exactly like the sort of writing people did in the New Republic supporting a war with Iraq not that long ago:

Zakaria said the article proves that as president McCain "would have tried to overthrow the government of Iran" because of his desire to "unleash America's full moral power" against the regime. This is outrageous. McCain's piece called on the United States "to support Iran's people in changing the character of their government -- peacefully, politically, on their own terms, in their own ways." Is even this a liberal heresy? McCain did call for targeted sanctions, ferocious sanctions, against Iran's human rights abusers. Is ferocity against even such villains too much to ask, too lacking in empathy and engagement? Who, precisely, is planning Operation Iranian Freedom? It is the paradoxical failure of Zakaria's imagination that he conflates moral power with military power, democratization with shock and awe.

Ok, but, "democratization" is a bit of a problematic word. How does the U.S. achieve that in a foreign, sovereign nation, exactly? With incredibly strongly-worded op-eds? Or will the sanctions do it? What if the sanctions strengthen the regime? What then? And what is this "ferocity" business about? (Also: who's planning Operation Iranian Freedom? I'm guessing, like, every single out-of-power Bush foreign policy hack toiling away at a right-wing think thanks, that's who. And Marty Peretz.)

Wieseltier also knows that Zakaria is no true supporter of the Green Movement in Iran, because he wrote that Ahmadinejad actually has support, in the country. That is true, but it is a terrible betrayal to mention it!

The Khameini-Ahmadinejad "oligarchy" represses and imprisons and rapes and tortures and murders its own citizens. It also promotes theocracy and terrorism in its region and beyond. All this is pretty plain. Why is Zakaria so fearful that American foreign policy will respond to such a government with stringency and loathing? Perhaps he believes that President Obama's policy of respect and accommodation will solve the nuclear problem and bring a measure of decency to the rulers of Iran, but there is no empirical basis for such a belief. It is a much greater fantasy than the "fantasy" that Zakaria deplores, which is no fantasy at all. Real realism consists of the recognition that nuclear peace and social peace in Iran will be reliably achieved only with the advent of democracy, and that since June 12, 2009, the advent of Iranian democracy is not an idle wish.

Yeah, you know what, Leon? You shouldn't say Zakaria is insane for accusing Iran hawks like you of being Iran hawks when you guys are clearly chomping at the bit to get in there and perform a regime change, pronto. I remember another dictator whose torture and imprisonment suddenly became much more of a moral imperative to deal with than everyone else's torture and imprisonment, just a couple years ago! (No, not Bush.)

Anyway, I'm guessing this was published in the Post because they're a lot more war-happy than TNR is these days. We'll see, once President Haley Barbour's in charge! (Or SecDef Clinton, perhaps?)