The secrets of "Psycho's" shower scene

How I uncovered the shocking truth about Hitchcock's best-known moment -- and why it still matters, 50 years on 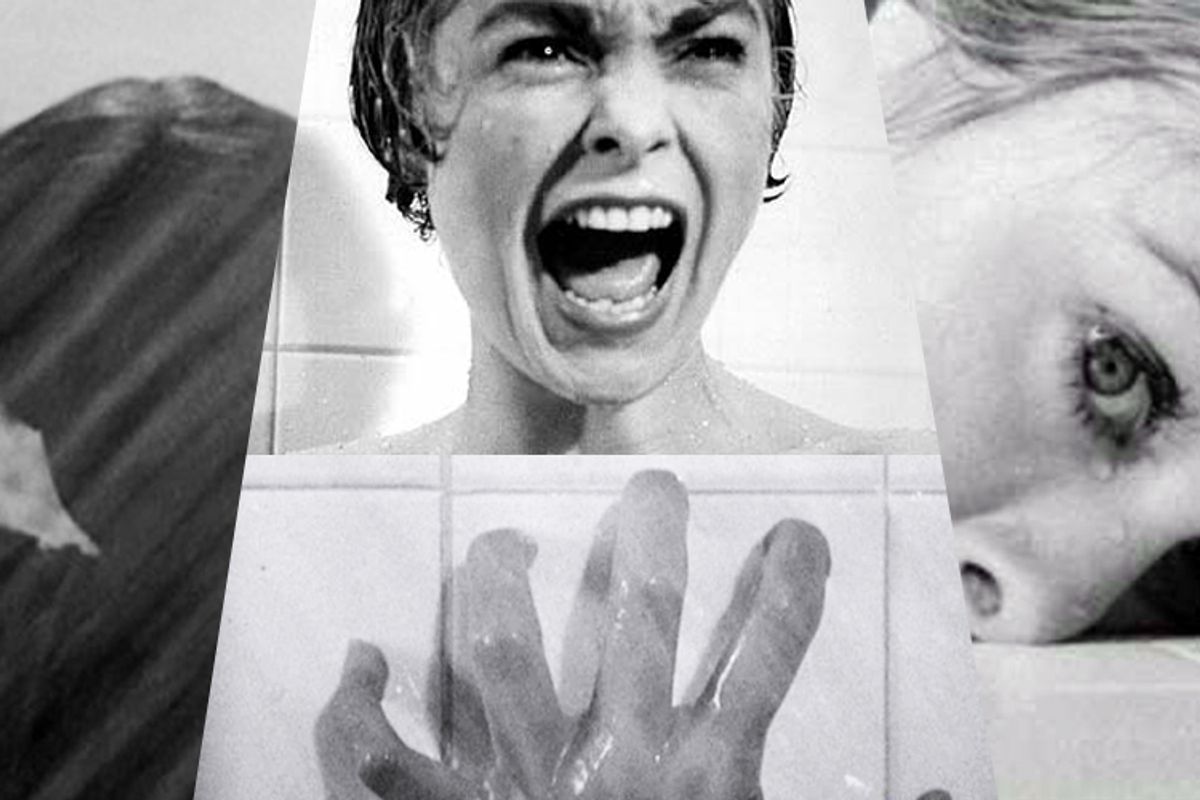 Fifty years ago this month, untold numbers of Americans stopped taking showers. The cause of this sudden downturn in personal hygiene was not a shortage of soap or water but, rather, an overabundance of fear and dread after viewing what all film buffs know simply as "the shower scene" in Alfred Hitchcock’s just-then-released "Psycho."

One angry father wrote to the brilliant director, saying his daughter had not bathed since viewing a bathtub drowning in the 1954 French film "Les Diaboliques," and now she was refusing to shower after seeing Janet Leigh’s character slashed to death in "Psycho." Hitchcock responded, "Send her to the dry cleaners."

The chilling scene has been called "a masterpiece within a masterpiece": 78 pieces of film perfectly edited into a 45-second sequence featuring the piercing shriek of Bernard Herrmann’s violin. It’s become a staple of film classes, and in college, I wrote a paper on Hitchcock, watching the scene over and over, terrified and fascinated as Anthony Perkins’ character, Norman Bates, wearing a dress and wig, his face obscured, repeatedly stabs the hapless and helpless Marion Crane.

Those 45 seconds have undergone continual dissection (pardon the pun, Marion!) by film critics over the past five decades, including discussion of the dozens of camera angles, in which the lens essentially becomes the knife, and debate over whether the viewer ever actually sees the blade piercing the skin. (Yes, it does happen in three quick frames.) A scene done in this visceral, elaborate way was unprecedented in a major Hollywood motion picture. Hitchcock thought that filming in black and white would soften the shocking, gory nature of the images (he used chocolate syrup for blood), but despite that, newspapers in 1960 reported moviegoers fainting, vomiting and staggering out of theaters screaming after viewing the sequence, which occurs just 30 minutes into the film. Even in 2008, film fans in an international poll voted the frenzied shower scene "the most nail-biting movie moment" in the history of cinema.

In the course of my research, I read one allegation about the weeklong filming of the scene that both troubled and intrigued me, but none of the reference books I consulted elaborated on the assertion.

A dozen years after acing that college report, I found myself conducting a long-form network radio interview with Tony Perkins about his latest movie. After the obligatory discussion of the film (1988’s "Edge of Sanity"), I eased into questions about Hitchcock and "Psycho," hoping he would solve the mystery for me.

I first asked Perkins if during the filming, anyone had a clue that "Psycho" would be viewed as the classic it later became. "I don’t think so," he replied. "Hitchcock was very modest in his aspirations for the picture. He filmed it with the crew from his television show, and many people on the Universal lot didn’t even realize he was working on a feature at the time. They thought it was an extended TV show. So the very modesty of the enterprise discouraged us from feeling we were working on anything that would be remembered for more than a season."

Perkins was engaging, articulate and, to my surprise, open to talking at length about the one role and one moment for which most people remember him, despite a respected 40-year-long career on stage and screen. He expounded on Hitch, saying, "His pictures were very fastidious in their use of violence. I don’t think he really got into that. He much preferred to imply terror." "Psycho," Perkins thought, was a rare exception, with its graphic and stunning depiction of murder.

Sitting with Perkins and hearing his stories was a moviegoer’s dream come true, but I had to take a stab at bringing him back to the nightmarish shower scene. I told him what I had heard, and asked if he would confirm the secret of "Psycho": that during the filming of the horrific moment where Norman Bates, in drag, dispatches Miss Crane, Anthony Perkins himself was nowhere near the movie set.

A slight pause for suspense … and then: It was true, he told me, with a sly smile on his face. And contrary to what I had read — that Perkins had to be in New York that week to rehearse a play and was therefore unavailable — the actor set the record straight, revealing that his non-appearance was quite intentional. "Hitchcock was very worried that the dual role and nature of Norman Bates would be exposed if I were to appear in that scene. I think it was the recognizability of my silhouette, which is rather slim and broad in the shoulder. That worried him."

Perkins added that the director, in effect, broke his own long-standing rule with that decision. "He was outspokenly eager to not play any tricks on the audience in his films, to do anything that couldn’t be thought of as fair play, but in that instance, he in fact did. The guy he chose, from the 'extra' pool, was very unlike the silhouette of Norman Bates, as played by me. So in a way, Hitchcock didn’t exactly play by the book when he cast someone else in that scene."

Perkins, who died four years later of complications from AIDS, didn’t seem perturbed that he had been excluded from the moment he’ll forever be associated with; the elaborate praise he received for his unsettling performance in the rest of the movie, which changed the face of American cinema, no doubt made up for that.

As for me, I couldn’t have been more pleased with my own tiny role in pulling back the curtain on a scene that, half a century later, still has many people thinking twice before stepping into the shower.