The thrilling climax of the Salon Reading Club 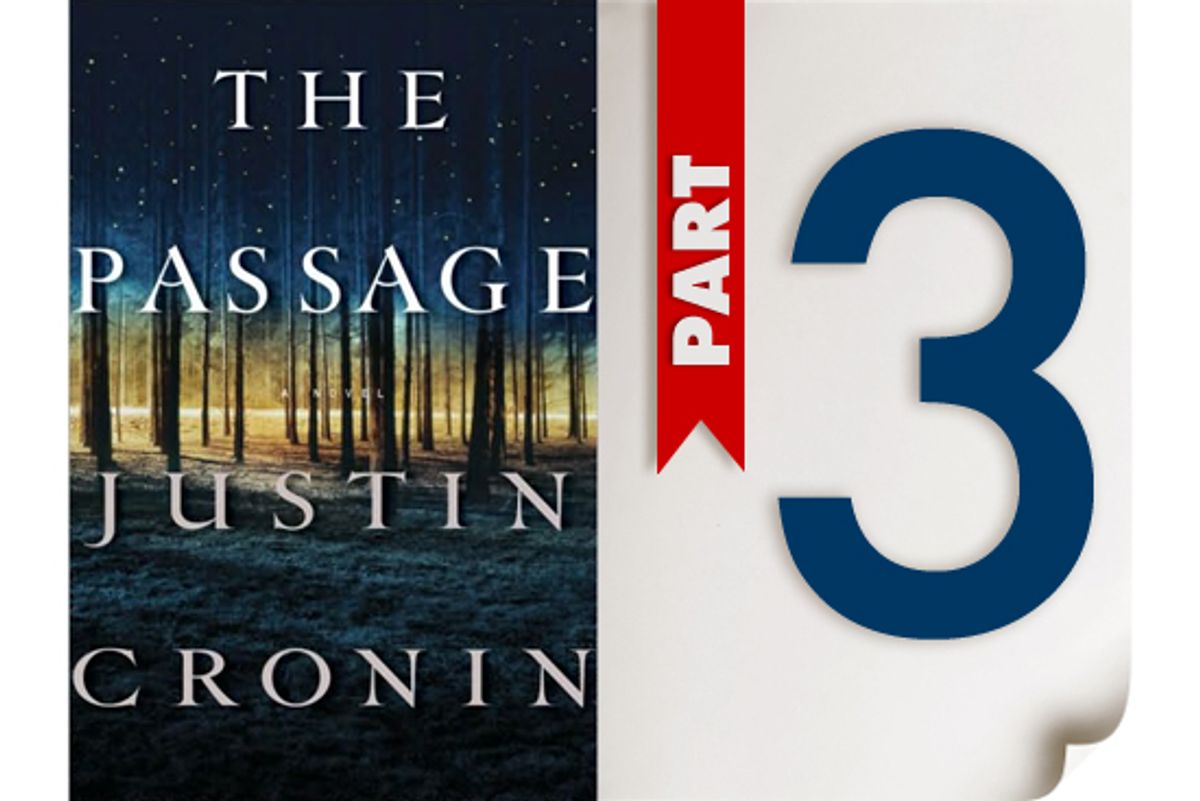 Welcome to the third and final session of Salon's new Reading Club. For those just joining us, we're discussing Justin Cronin's post-apocalyptic epic, "The Passage." Last week, we talked about Parts 2 and 3 of the book (Pages 247 to 493). This week we're reading straight through to the end. (Follow the link here for more information on the Salon Reading Club.)

As before, I'm going to start the discussion with a few questions and observations, but please feel free to take the conversation wherever you like in the comments thread. Fortunately, we no longer have to guard against spoilers and can discuss what will be a revelation for many -- this is just the first book in a project series (probably a trilogy). Remember, if you haven't finished the book yet and don't want to be spoiled, then don't read any further. Once again, if you have questions for Justin Cronin himself, don't forget to post them, since we'll shortly be forwarding them directly to him. Can we agree that we're free to ask him about anything in "The Passage," and Salon will put a spoiler alert on the interview to warn off the uninitiated?

Now (at last!) I can ask if anyone else was reminded of Richard Adams' "Watership Down" while reading the section about Haven? There's a scene in the Adams novel where the pilgrim rabbits stumble upon the seemingly idyllic Cowslip's Warren, whose inhabitants espouse a strange fatalism. Then they learn the warren's terrible secret ...

This left me wondering if, in some ways, "The Passage" owes as much to "Watership Down" as to "The Stand." And once again, this highlighted for me the differences between what King and Cronin choose to do with their post-apocalyptic scenarios. I mentioned earlier that Cronin's characters, unlike King's, are not caught up in a struggle between Good and Evil. Someone pointed out that the characters do generally fall into good and evil camps, but that's not the same thing. The first is a metaphysical situation; King's characters participate in a clash between supernatural forces larger than themselves -- essentially surrogates for God and the devil. The good and evil (lowercase!) in Cronin's novel are moral stances on a human scale.

But, also, apart from maybe Richards at the beginning of the book, hardly anyone in "The Passage" behaves out of sheer, nihilistic malevolence. Most of them believe that they are doing what's best for themselves and often for their community as well. Even Babcock is mostly just trying to survive and reproduce, like any parasite!

I see other similarities to "Watership Down" as well, but I'll leave that for the rest of you to point out if you like. What I particularly appreciate about the end of "The Passage" is that it manages to be quite satisfying while still leaving the door open a crack for the next book. What did you like or dislike about how Cronin wrapped things up?