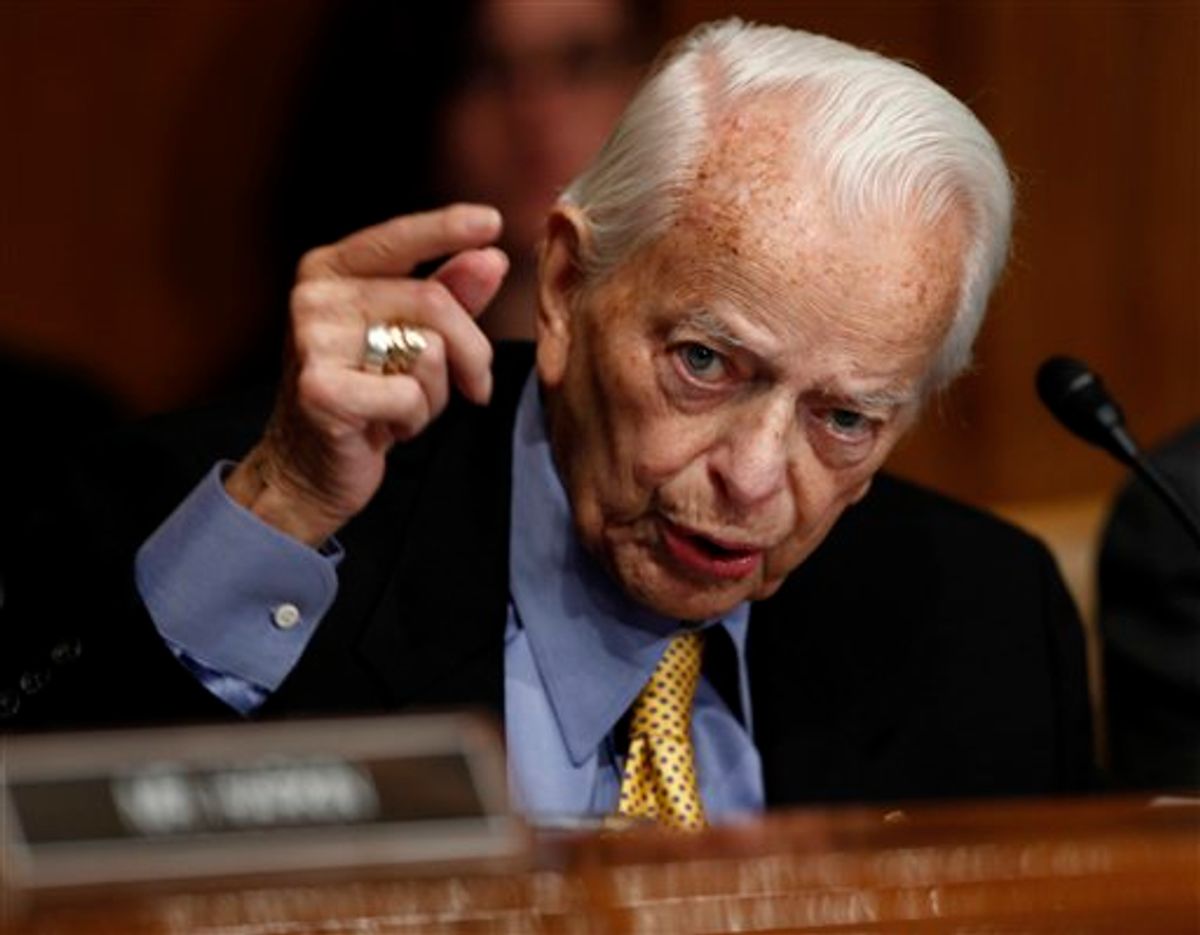 [Updated] This is hardly the first time that Robert Byrd has been hospitalized, but (to my knowledge) it is the first time his own office has said that the 92-year-old senator is "seriously ill." So, the question of who would fill the Senate seat he's held since 1959 if Byrd vacates it seems more relevant than ever. On this subject, there are two things to keep in mind:

2) The man who will make any appointment wants the seat for himself -- but has also ruled out appointing himself to it. That would be Joe Manchin, a 62-year-old Democrat who has been West Virginia's governor since 2005. Manchin is quite ambitious and has let it be known in West Virginia that he has national aspirations. Earlier this year, he formed his own PAC for national political activity -- Country Roads PAC -- and he's slated to become the chairman of the National Governors Association later this summer. But he's scheduled to be term-limited out of the governorship in 2012, so maneuvering his way into Byrd's seat is probably Manchin's only way of retaining his political viability and furthering those national aspirations.

The assumption, then, is that Manchin would simply appoint a placeholder to the seat, someone to keep it warm until he can run for it himself. (He has said that he wouldn't appoint himself.) His popularity is high (he was reelected with nearly 70 percent of the vote in 2008) and he'd be favored against any Republican.

This is where the issue of timing comes in: If Byrd were to die or give up the seat in the next few days, Manchin and his Democratic allies in the state might have some wiggle room in deciding when the seat is officially declared vacant. In other words, Manchin could potentially get to decide whether he wants to run this fall, or if he'd rather wait until 2012.

Even though this fall figures to be rough for Democrats, it's probably a better time for Manchin to run. He's plenty popular now and, thanks to his cultural conservatism and staunch defense of the state's coal industry, he's separated himself enough from Barack Obama and the national Democratic label that he'd probably be fine. And his presence in a special election this fall would probably scare off the strongest potential Republican, Rep. Shelley Moore Capito. But if Manchin has to wait two years to run, circumstances could change. (Also, if Manchin for some reason decided not to run in a special election this year, Capito could very conceivably win the race -- and then build up enough strength to fend off Manchin in a '12 race.)

Some who know him describe Manchin as somewhat frustrated that he hasn't climbed higher on the political ladder by this stage in his career. His upward momentum was stalled back in 1996, when his first bid for governor failed in the Democratic primary. Manchin then revived his career with a victorious campaign for secretary of state in 2000. Four years later, he pushed a sitting Democratic governor, Bob Wise, out of the way and finally claimed the governorship, edging closer to the national stage he has long coveted. The next step, it is almost universally agreed, will be a play for Byrd's seat.

Update: Byrd passed away at around 3 a.m. on Monday. The question now is when his seat will officially be declared vacant. Per Politico, here's the relevant wording of West Virginia's succession law:

“If the unexpired term of any office is for a longer period than [30 months], the appointment is until a successor to the office has timely filed a certificate of candidacy, has been nominated at the primary election next following such timely filing and has thereafter been elected and qualified to fill the unexpired term.”

The catch here is that West Virginia has already held its primary for this year, last month, and doesn't have another one slated until 2012. So even though Byrd's death comes outside of the 30-month window, one reading of the law suggests Manchin's appointee will hold the seat through 2012, no matter what.