The brilliant class tensions of "Entourage" 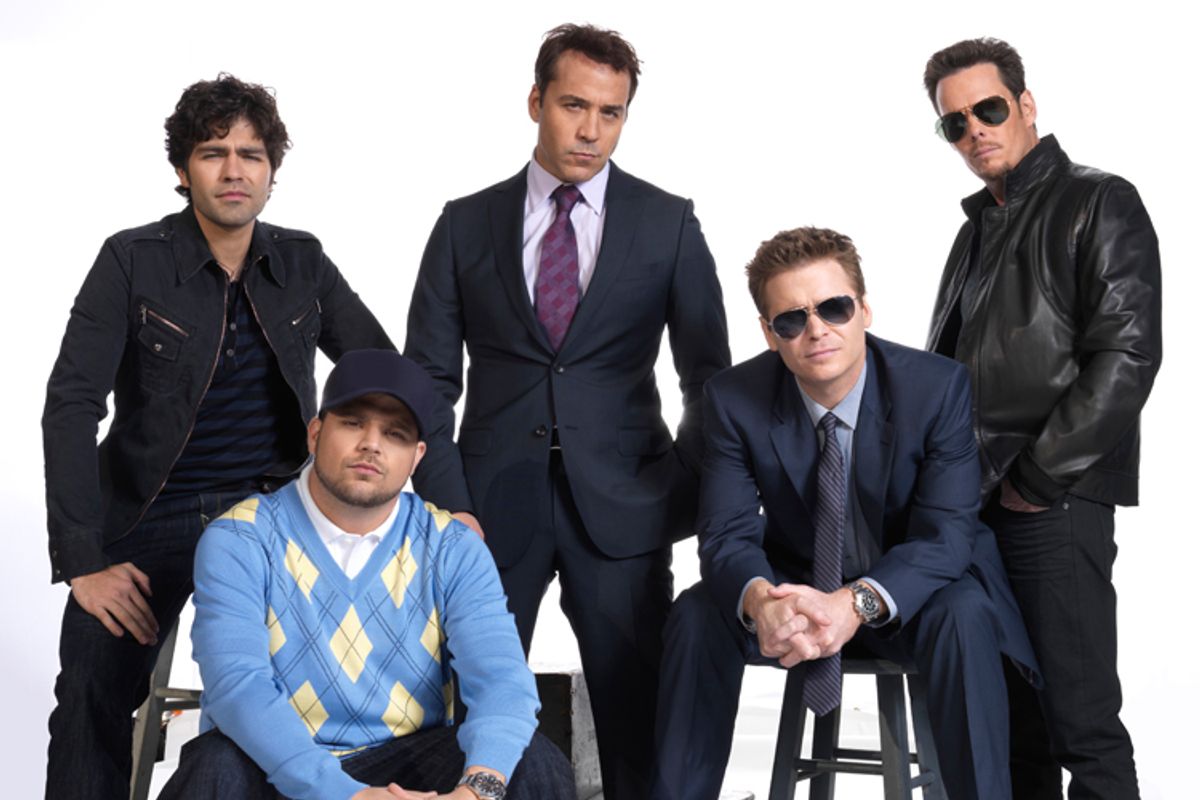 Seven seasons into "Entourage," the show's transplanted Queens boys -- Vincent (Adrien Grenier), his big brother Johnny Drama (Kevin Dillon) and his best friends E (Kevin Connolly) and Turtle (Jerry Ferrara) -- still seem faintly amazed by how far they've come. Even when they size up a babe-laden yacht with a blasé-sounding quip, you sense an undercurrent of incredulity that's of a piece with the gripe that industry veterans often lodge against them: Deep down, they're naive. In a sense, they are naive. And it's not just their default state. It's a performance sustained for the world and for each other.

"Entourage" has long been described as the straight man's answer to HBO's urban princess fantasy "Sex and the City," and superficially the description fits. From the sports cars and designer duds to the offhand sexist and homophobic one-liners to the endless array of curvy babes jockeying to bed Vince -- or service one of his buddies as a consolation prize -- the series is a fantasy of alpha male entitlement, and a weekly dip in filthy lucre only slightly less shameless than those cash baths that Scrooge McDuck used to take. It would be mere bubblegum wealth porn were it not for a singular, striking quality: its fascination with class.

"Entourage" is stocked with characters that constantly talk about money and status and are terrified of losing both. The show treats their urge to acquire and display wealth as the fuel for nearly every decision they make. (After years of living beyond his means, Vince is advised by his accountant to file for bankruptcy and "wipe the slate clean," but resists because of past family shame: His dad filed bankruptcy and "left my mother with nothing, not even child support.") The series often plays like Budd Schulberg's satirical novel "What Makes Sammy Run?" rewritten for the Bowery Boys. It's about a bunch of street-corner yahoos elbowing their way into the world's sleaziest country club.

The lead characters' blue-collar background gives them license to take big risks. It emboldens E to start an independent talent agency (now defunct, alas). It empowers Turtle to start his own business and go back to school to earn a degree in business management. And it inspires Vince to put art and personal loyalty ahead of money (unless he's broke, of course). "I came from nothing," Vince insists, "and as much as I like the toys, I can live without them."

After playing the title role in "Aquaman," the top grossing film of all time, Vince passes on the sequel and instead stars in "Medellin," a Pablo Escobar biopic directed by his old friend Billy Walsh, the loony auteur behind Vince's art-house breakthrough "Queens Boulevard" (which Vince did in lieu of yet another action flick). When "Medellin" bombs at Cannes and almost wipes Vince out financially, he retreats to a beachside hut in Mexico with a couple of babes, plus Turtle and his then-girlfriend. When E tries to lure Vince home with the promise of a lead role in yet another action picture, Vince tells E he can live on the beach indefinitely for pocket change, so what does he need Hollywood for? (Duh. Because without it there would be no show.)

Even the goofball Drama seems to have flourished by embracing his roots. When he trumpets his cheesy acting credits, he sometimes sounds like a second-rater deluding himself. But other times he just sounds proud -- and he has a right to be. Drama survived as a Hollywood actor for nearly two decades, refusing day jobs unless he had no choice. That's a workingman's definition of success. (Vince shares it; that's why he kids Drama for all sorts of reasons, but never mocks him for reciting his résumé.)

Class also colors the show's portrait of machismo. Phony swagger is a common sight in the new Hollywood -- a place where truly tough, Old World immigrants have been supplanted by Ivy League legacies that misquote "The Art of War" and describe gross point deals as if they were military victories brutal enough to traumatize Genghis Khan.

But in the case of Vince's agent, Ari Gold (Jeremy Piven) -- a bull-necked public school kid who married into money -- the swagger isn't a put-on. Ari is a hot-tempered visionary with more drive than sophistication; that's part of the reason he gets along so well with Vince and the gang. His fifth-season feud with a rival agent escalates with an impromptu street race and ends with Ari avenging the agent's slur against his wife by storming into the man's workplace, slapping him across the face, and threatening to kick his ass right there if he doesn't apologize. (He apologizes.)

Turtle and Drama are only slightly more civilized. For them, "justice" means doing whatever they have to do to be able to look in a mirror and not see a punk-ass bitch staring back. They're not above avenging slights by playing pranks or vandalizing the offending party's car. In an episode where the entourage accompanies a cash-strapped Vince on an interview with a rich couple that wants Vince to appear at their daughter's sweet 16 party, Drama thinks the couple is treating him in a high-handed way, so he boosts a bottle of scotch on the way out.

E seems mostly immune to such lapses; he doesn't lose his cool even when he's financially or physically threatened. Vince is nearly as contained (Grenier plays him as a cagey, observant guy), but there are times when the Queens kid comes out. It shows up in the seventh season premiere when an action film director (Nick Cassavetes) pressures Vince into doing a dangerous stunt by posing a rhetorical question: "You don't wanna look like a pussy, do you?"

"Vince, you're gonna do the stunt for what, so these guys don't think you're a pussy?" E asks him.

"No, I'm gonna do it so I stop feeling like one," Vince replies.

The gang's hardscrabble roots are even more visible in the episodes involving their old buddy Dom (Domenick Lombardozzi), a loudmouthed hood who served five years for drug possession and assaulting a cop. Dom is employed as Vince's head of security until he steals a Shrek doll from a movie producer's house. Rather than turn Dom in and then cut him off, the boys contrive to return the doll in secret, then give Dom an apartment and a Humvee as a "severance package."

Their loyalty appears to be vindicated in a fifth-season episode where Dom leads cops on a high-speed chase and lands in jail for marijuana possession. But even when Dom wins a moral victory, he remains a prisoner of his class. He tells Vince and E that the weed in his glove compartment was for his mother-in-law's glaucoma, but he reflexively panicked when he saw red-and-blue lights. E fronts Dom $100,000 in bail money even though he suspects his old friend is lying. Dom turns out to be telling the truth, but that doesn't assuage Dom's long-suffering wife, who made him promise he'd stay out of trouble. She takes their child and splits, and Dom is so devastated that he asks to go back to jail.

The group's indulgence of Dom shows how the working-class hero mind-set can be a curse as well as a blessing. Men from humble backgrounds often feel obliged to help troubled old friends even when it puts their own stability at risk. To refuse would mean they'd sold out and become One of Them.

Series creator, show runner and head writer Doug Ellin and co-executive producer Rob Weiss are lifelong friends who met at Woodmere Academy in Woodmere, N.Y., not exactly a hotbed of street values. But the biography of another "Entourage" executive producer, Mark Wahlberg, dovetails more closely with that of the Chase brothers and their pals. Before he was a movie star and a rapper, he was a South Boston street kid who dropped out of school, sold drugs, and did jail time for beating a Vietnamese man.

In his guest appearances on "Entourage," Wahlberg is often seen on a golf course dressed like a pro-in-residence, speaking softly and hitting textbook-perfect drives. The image of this pumped-up ex-hood loping across a well-manicured green encapsulates the Chase posse's fantasy endgame, and brings a great Groucho Marx line to weird new life. Who says you can't belong to a club that wouldn't have somebody like you as a member?