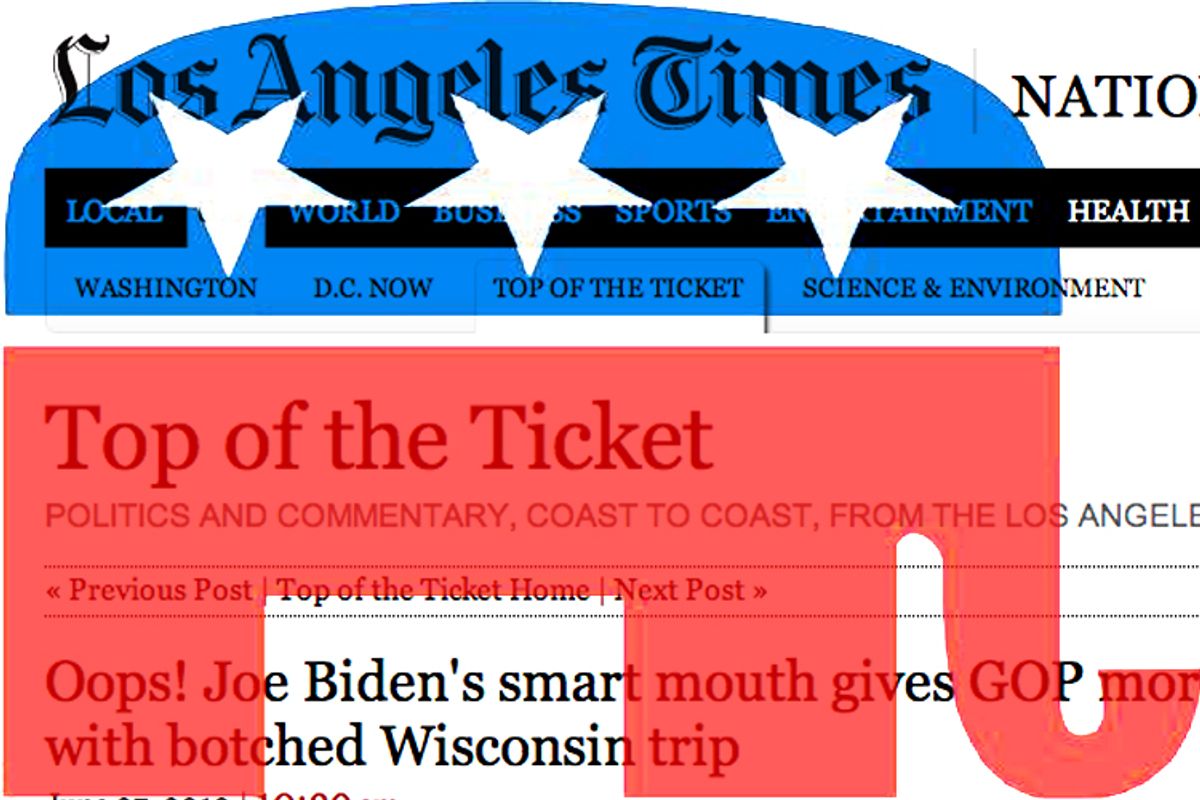 Remember the goofy Biden video from earlier? You know, where he was joking around with the manager of the custard shop in Wisconsin? Remember how the L.A. Times blogger who posted it seemed to, uh, exaggerate the seriousness of Biden's behavior?

The author of that blog post, it may surprise you to learn, is a Republican. His name is Jimmy Orr, and the L.A. Times does not apparently want you to know that he is a Republican.

Orr regularly contributes to the Times "Top of the Ticket" blog. "Top of the Ticket" provides, according to its description, "Politics and commentary, coast to coast, from the Los Angeles Times." Its primary editor is Andrew Malcolm, a reliably snide former Laura Bush press aide whose job seems to be to spin every story in a way that maximizes the chances that Matt Drudge might link to it. Malcolm, at least, mentions the Bush connection in his L.A. Times bio.

As for Jimmy Orr? There is no information on the site about this character! If you Google Jimmy Orr, well, he might be a 74-year-old former Baltimore Colt. But he is actually this guy. Not just a former Schwarzenegger spokesman, but an actual former employee of the Bush White House communications team:

Previous to this post, Orr served as the White House E-Communications Director and White House Spokesman for President George W. Bush. It was here where Orr created “Ask the White House” – a live interactive effort where members of the Bush administration chat with the public many times a week.

So. A former professional Republican flack is writing for the L.A. Times newsblog without the paper identifying him as such. Or even just saying it's a "conservative blog." And the former Bush flack is hyping a completely ridiculous Biden "gaffe." In fact, nearly everything Malcolm and Orr write is critical of the Obama administration, disdainful of Democrats, and supportive of Republicans. They print poll results that are good for Republicans, but not ones that look like good news for Democrats.

There's nothing wrong with the Times hiring conservatives to blog for them. If the Times wants a conservative blog, they can go ahead and launch a conservative blog. The point is to actually identify it as such. Right now the Times seems to be catering their online product specifically for Drudge and the right-wing blogosphere while pretending it's still objective in the traditional old newspaper sense of the word.

To have a professional Republican flack attacking Democrats without identifying himself is just stupid and insulting. (Of course, if it was ever revealed that either Malcolm or Orr had ever said anything mean about Matt Drudge in private, I'm sure they'd both be looking for work by the end of the week.)