The president's call for more stimulus is ignored at home and abroad. Get ready for the great retrenchment 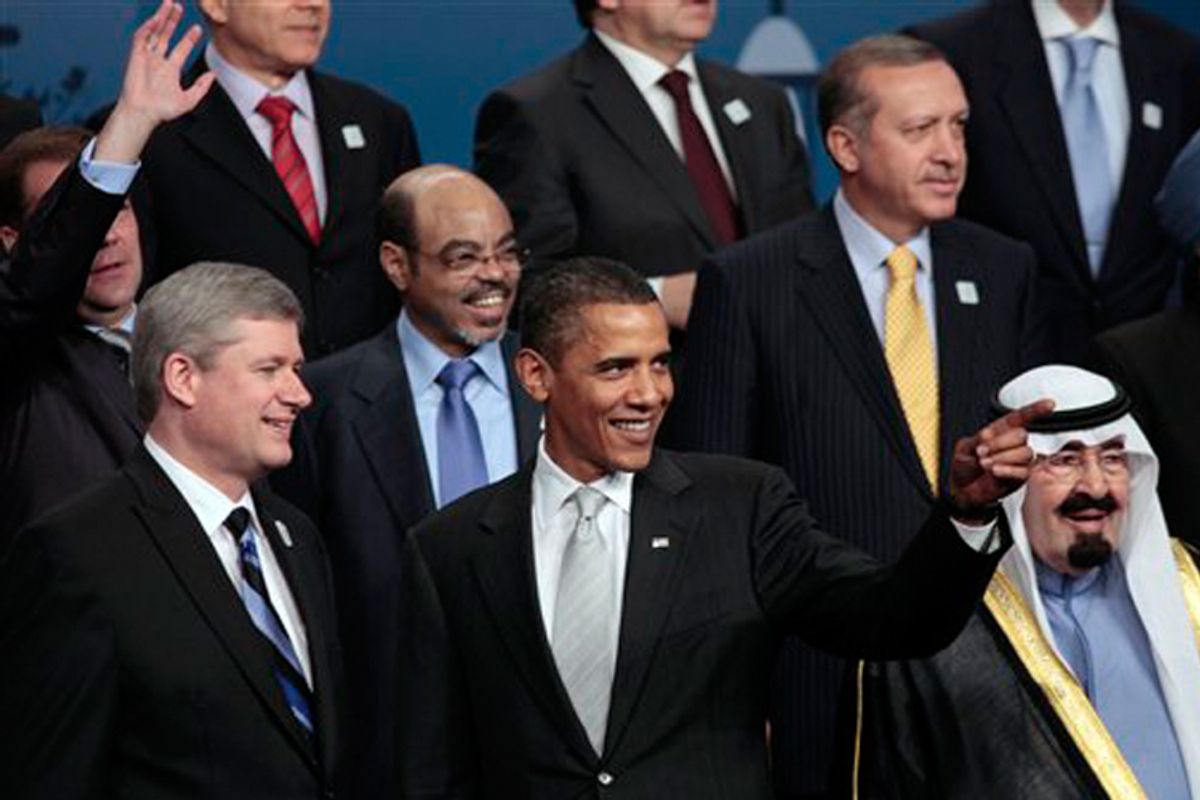 Obama at the G20 Conference
--

The G-20 summit is over, and the big news is that "fiscal austerity" is the new global watchword: The official summit declaration announces that "advanced economies have committed to fiscal plans that will at least halve deficits by 2013."

And everyone gets a new pony, too. The leaders of the United Kingdom and Germany believe that the new austerity drive will somehow result in renewed economic growth. Students of history, mindful of the lessons of the 1930s, worry that a "Third Depression" is in the offing. But all the pundits seem to agree on one thing: The G-20's declaration represents a failure for President Obama, whose warning that what the world needs now is more government-stimulated demand, rather than fiscal retrenchment in the face of a very shaky global economy, was rudely ignored.

Even worse, the president has opened himself up to accusations of hypocrisy, since the U.S. is rapidly hurtling toward its own austerity regime. If Obama really believed that it is not yet time to start cutting government spending, then why hasn't he made a more forceful push for increased stimulus spending in the U.S.? Why does he keep talking about his call for a three-year freeze on non-defense-related domestic appropriations?

The accusation is unfair. Obama's proposed short-term deficit cutting measures are entirely superficial, and everyone knows it. They do not even begin to compare in scale, for example, to the ambitious cuts proposed by the U.K. government. We can criticize the president for offering a useless sop to the deficit hawks, but not of misunderstanding the current moment. Paul Krugman is on the money:

The Obama administration understands the dangers of premature fiscal austerity -- but because Republicans and conservative Democrats in Congress won't authorize additional aid to state governments, that austerity is coming anyway, in the form of budget cuts at the state and local levels.

Last week, Senate Republicans killed a bill that would have extended unemployment benefits and helped ailing states pay for Medicare expenses. The bill also included a tax that would primarily have been paid by Americans making more than $1 million a year. As these things go, it was a fairly responsible piece of stimulus -- funneling money to the people and programs that most need it, while taxing those most able to pay. The Republicans, along with a handful of Democrats, said no way, and they sent a clear message to the White House: There will be no more stimulus, of any kind, between now and November.

The result is going to be a severe blow to the U.S. economy. State and local budgets are crumpling, government payrolls -- firefighters, police officers, teachers -- are about to be hacked, public employee pension and benefit plans are set to be eviscerated. At this point, that scenario is inevitable -- there's no way out, and one gets the very strong sense that some conservative politicians are pleased as punch at the prospect of a weakening economy serving as a backdrop to the midterm elections. Rush Limbaugh set the tone shortly after Obama's election -- "I hope he fails" -- and Senate Republicans executed the plan efficiently.

But just because the U.S. government is dysfunctional doesn't mean Obama has to treat the rest of the world as if it, too, is brain dead, and  incapable of understanding that a global pivot to austerity, right now, is a perilous undertaking. The G-20 summit declaration even acknowledges that "there is a risk that synchronized fiscal adjustment across several major economies could adversely impact the recovery." And yet that is precisely the plan of action that the G-20 is endorsing.

Leave it to China to make some sense:

Chinese President Hu Jintao said, "We must act in a cautious and appropriate way concerning the timing, pace and intensity of an exit from the economic stimulus packages and consolidate the momentum of recovery of the world economy."

He's right, and so was Obama.