If you don't have a Ph.D. please don't bother us with your "sophomoric musings" 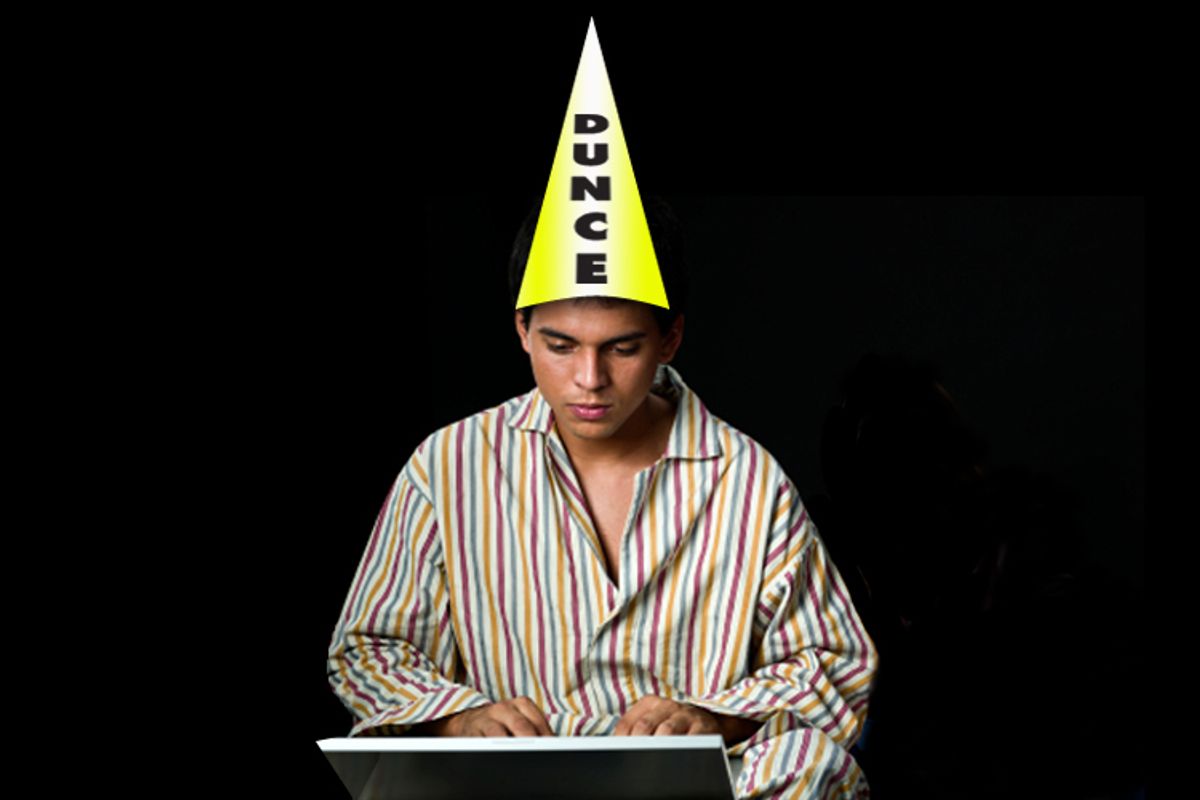 Since Ph.D.-flaunting economists can reasonably be assumed to be smart, Karthik Athreya, a specialist in macroeconomics and consumer finance who toils away in the bowels of the Federal Reserve Bank of Richmond, probably knew that he was going to cause a ruckus when he published a broadside declaring the entire blogospheric discussion of economics irrelevant, useless, and dumb.

I've been struggling to figure out the best metaphor to describe the impact that "Economics is Hard" has already had on the econoblogosphere. Poking an anthill doesn't quite convey the magnitude of the transgression. Perhaps Brunei declaring war on China? Or the Knights Who Say Ni challenging Genghis Khan's Mongol horde to a duel to his death? One thing is certain: Karthik Athreya, by dismissing legions of bloggers as worthless, has ensured that his own name will live in infamy for generations (or at least, a couple of days.)

Athreya's basic argument appears to be that only professional research economists should be allowed to discuss economics because, well, economics is really hard, and nobody else has a chance of understanding it or appreciating all the complexity of the discipline. "When a professional research economist thinks or talks about social insurance, unemployment, taxes, budget deficits, or sovereign debt, among other things, they almost always have a very precisely articulated model that has been vetted repeatedly for internal coherence," he writes. Everybody else, not so much.

Comparing, even momentarily, such careful work with its explicit, careful reasoning, its ever-mindful approach to the accounting for feedback effects, and its transparent reproducibility, with the sophomoric musings of auto-didact or non-didact bloggers or writers is instructive....

The real issue is that there is extremely low likelihood that the speculations of the untrained, on a topic almost pathologically riddled by dynamic considerations and feedback effects, will offer anything new. Moreover, there is a substantial likelihood that it will instead offer something incoherent or misleading.

(If you lean close to your computer monitor right now, you can hear a million bloggers sputtering at once. It is not a happy sound. Kind of like the sound you hear shortly after stepping on a nest of yellow jackets while hiking through the woods.)

Athreya observes, with some dismay, that in the field of Oncology there is no comparable onco-blogosphere boasting a mob of untrained idjits spouting off varying theories about what causes and how to treat cancer. (Which is not to say that there are no crackpot wannabe onco-pundits, just that they are insignificant in numbers compared to mighty throng of poseurs who dare to cite Keynes' name as if they actually understood what the man was going on about in "The General Theory of Employment, Interest and Money.")

"Do we expect advances in cell-biology to be immediately accessible to anyone with even a college degree?" he asks plaintively.

But here is where Athreya makes a serious misstep. The science of cell biology is by no means monolithic, but there is a pretty good consensus about what constitutes scientific truth for the bulk of the field. There's plenty that is still unknown, and competing theories out at the advancing edges of research, but, even though I do not have a degree in cell biology, I'd venture that it is safe to say that most cell biologists agree on the fundamental stuff.

The same is demonstrably not true for economics. Nobel Prize winners disagree on the most basic points, such as: what's the proper role of fiscal and monetary policy during a recession? Does the minimum wage or illegal immigration hurt or help employment? Economists disagree. What impact does regulation have on the economy? Economists disagree. Yes, economics is hard -- so hard that even economists with fancy degrees don't appear, to the layman, to know what the heck is going on.

This wouldn't be such a big deal if weren't for the nagging little problem that economic policy is something we expect governments to do. We don't expect Congress to cure cancer, but we do expect our leaders to do their best to avoid inciting Depressions and bank panics and devastating trade wars. But not only do economists disagree, profoundly, on how their research translates into policy, but most of them are also horribly incapable of communicating their research into language comprehensible by politicians. Which is where the rest of us come in, all the untrained auto-didacts attempting to understand what the economists are saying and translate it into words that can influence policy in a practical manner.

The complexity involved is, without question, immense. But that does not mean we should shy away from it -- especially now that we have the Internet around to help us navigate our way through these dense thickets. The stupidest part of Athreya's essay is its title: "Economics is Hard," which automatically summons up the memory of Teen Talk Barbie's "Math class is tough" utterance. (Sadly, Wikipedia tells me that Barbie never actually said "math is hard," and call me a crazy mob-trusting fool, but I'm going to go with the group mind fact check on this one.) The reason why many women were upset with Teen Talk Barbie was obvious: It played into stereotypes that assumed women just couldn't do the math. So why even bother try?

I will be the first to acknowledge that I stumble flat on my face when I hit the math sections included in cutting-edge economic theory. But that doesn't mean I am discouraged from trying to learn more, an important part of which means learning who to trust in the cacophony of econoblogospheric debate. Whose articulations of the problem more closely resemble reality, and resonate with history? Who is best able to take the economic data of the day and slot it into a narrative that makes sense? Who is obviously a cynical, ideologically shuttered fool? I marvel every day at the power of the Internet to put me in the middle of conversations between trained economists and a vast universe of interpreters and filters. I once called the econoblogosphere an ongoing graduate-level seminar in economics, open to everyone, and see no reason to back off on that now. Sure, the democratization of information means that there is a lot of silliness out there -- Sturgeon's 90 percent of everything is crap law undoubtedly applies to Internet discussions of economics.

But pay enough attention, do your homework, and you will find yourself more able to educate your more thoroughly on topics relevant to the pressing matters of the moment than ever before.

The good stuff floats to the top. That, I fear, is not likely to be the fate of "Economics is Hard."