Byrd: An astonishing career, missteps and all 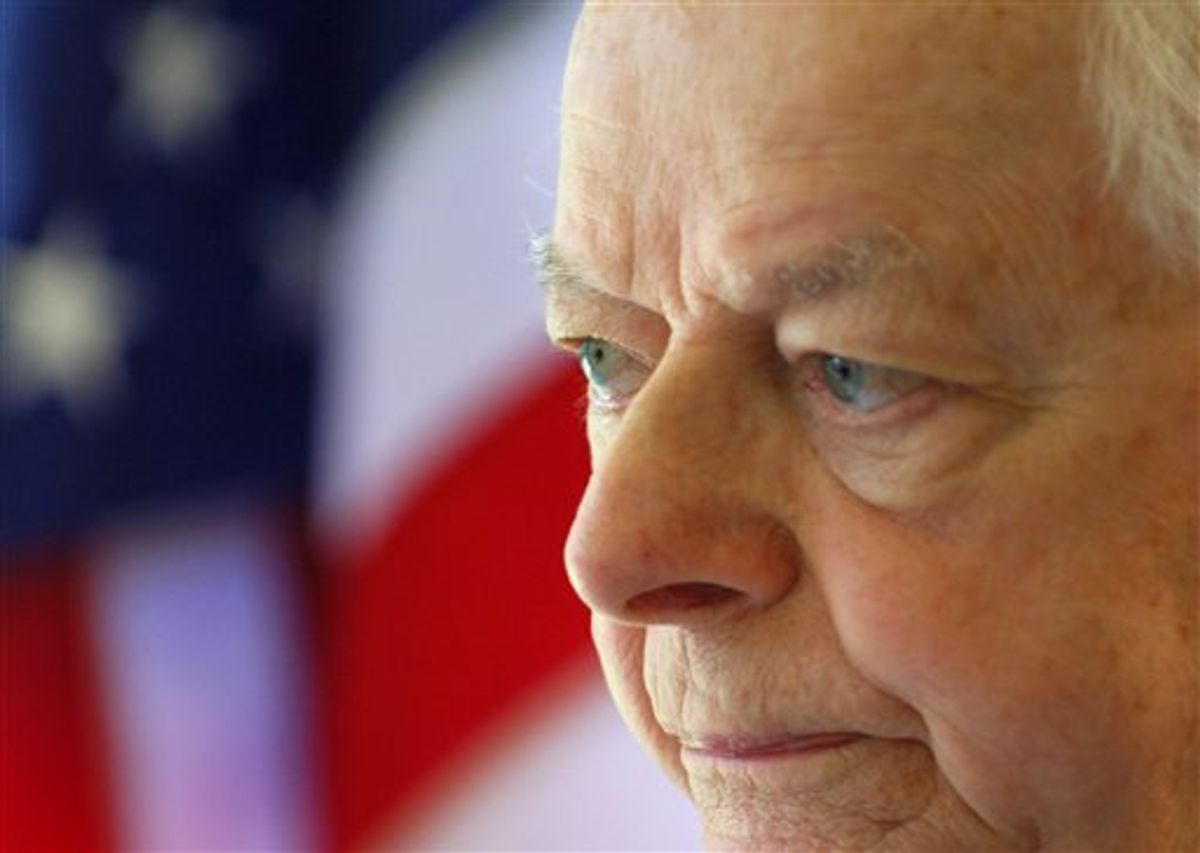 I think I was six years old when Lyndon Johnson came to my hometown of Morgantown, West Virginia to give a speech touting some Great Society programs in what must have been mid-1967. All the state’s big shots were there, up on the dais. Dad, a local attorney active in politics, wasn’t quite big enough to be on stage, since he held no office, but we were seated at the ace table in the ballroom, and I remember that Johnson, describing conditions faced by poor children, pointed at me several times (“just like this child right here...”).

I also remember that even then -- even though Robert Carlyle Byrd wasn’t yet a decade into his Senate service -- dad spoke of Byrd not familiarly, as he did most of the state’s pols, but quietly and reverentially. Dad knew Byrd, certainly. But there were no stories about him, no anecdotes of taking him to shake hands outside a local mine at a change of shift, no tales of seeing Byrd knock back a bourbon in the bar of long-gone Daniel Boone Hotel down in Charleston and craning forward as he delivered the inside dope on what those crazy people in Washington were really up to.

Well, Byrd was from the southern part of the state, down below Beckley. We were northerners, almost Pittsburghers. In those days especially, you could have built a wall across the state more or less along U.S. Route 50 -- above it north, below it Dixie. And the roads were such back then that Beckley was far, far away; it was probably faster to get to Philadelphia. So there was certainly that.

But I would wager that even well-placed lawyers from Byrd’s part of the state spoke of him quietly and reverentially, and I bet they discovered, when they thought about it, a surprising dearth of anecdotes. He just wasn’t that kind of pol. “Pol” isn’t even the right word. He did enough flesh-pressing to get by. He’d learned the fiddle as a young man, and that certainly paid dividends on the hustings. But a lot of the time, he was probably at home reading Polybius.

Now Byrd is gone, at age 92, having served a record-setting 51 years in the United States Senate. The career is astonishing mostly for all the history he witnessed and shaped, all the eras he outlasted.

He came to a deeply reactionary Senate, dominated by the Southern barons, in which, alas, he felt all too at home. But it was a changing Senate, too: His class, that of 1958, was notable for the many liberals it elected, men like Ed Muskie, Phil Hart, Gene McCarthy. By 1963, the Southerners were being challenged. Byrd was, famously, on the wrong side of history then. He opposed the 1964 civil rights bill and spoke against it for 14 hours. He was, frankly, terrible on the question, and although his also-famous membership in the Ku Klux Klan many years before was brief, it stuck with him, and it deserved to stick with him. It took him too long to change his racial views, which always seemed to me more reflective of his part of the state than mine, although maybe I’m being naive there.

But as the Southern-baron era faded and the Senate entered its era of liberal activity, Byrd eventually joined and embraced it. By the 1970s, after he’d defeated Teddy Kennedy in a whip election, he’d become more or less a moderate-to-sometimes-liberal Democrat. In 1977, now majority leader, he hit what many regard -- well, okay, what my father always regarded -- as the high point of his career, when he defended handing over the Panama Canal Zone to Panamanian authority and rounding up the votes in the Senate for it.

If you weren’t around then or were too young: It was a ferocious battle marked by the kind of nativism and xenophobia with which we are alas still quite familiar. It’s almost impossible to imagine that 68 senators would have the guts to vote that way today. Byrd was instrumental in making it happen.

In the third era Byrd lived through, the era of partisanship and polarization and lobbying and money, Byrd again played an important role, and one history will largely applaud, as guardian of senatorial power. That posture wasn't always good for the republic: As I noted on my Guardian blog, he was an ardent defender of the filibuster.  But he opposed giving Bill Clinton the line-item veto on separation-of-powers grounds, and he opposed giving George W. Bush his war on largely the same grounds. He said in February 2003: “On this February day, as this nation stands at the brink of battle, every American on some level must be contemplating the horrors of war. Yet, this chamber is, for the most part, silent -- ominously, dreadfully silent. There is no debate, no discussion, no attempt to lay out for the nation the pros and cons of this particular war. There is nothing. We stand passively mute in the United States Senate, paralyzed by our own uncertainty, seemingly stunned by the sheer turmoil of events.” He was also unusually prescient in warning that the war wasn’t going to be quite as easy as most were advertising.

That position cost him some points back home, in a state whose politics became increasingly conservative during Byrd’s tenure. While West Virginia was never Massachusetts, it was always heavily union and, in my youth, surprising in certain ways (one of the most liberal state supreme courts in the country, for example). Over the decades, the massive decline in union membership -- barely around 15,000 UMW members in the state today -- and the little-discussed incursion by the Southern Baptist Convention into the state -- a handful of churches when I was little, more than 300 last time I checked -- changed the state into pretty fertile Limbaugh territory.

There was talk among the state’s Republicans in 2003 and 2004 of taking Byrd out in 2006. The Republicans found a rich conservative, John Raese, a native of Morgantown, to run against him. (My dad represented the striking Newspaper Guild workers against Raese’s newspaper-owning family in 1972). But Byrd crushed him by two-to-one. West Virginians were going to let the old man run out the clock. All that infamous pork helped, of course. You can’t throw a rock in the state without hitting something named for Byrd, and no, no one feels the remotest shame about it.

But I don’t think it was only the pork. West Virginians knew they had someone of stature representing them, and a small, poor state doesn’t produce many of those. There are the university’s basketball and football teams, and Byrd and Jay Rockefeller. Mary Lou Retton maybe, although that’s getting to be an old one, and she hasn’t lived in the state in ages. In stature terms, that’s about it. West Virginians don’t take that cavalierly.

A man his age has lived a more than full life, but if there is a sad thing about his passing now, it is that he was just starting to use that stature to do something he’d never done: challenge the coal industry. Like most West Virginia politicians, he was predictably in coal’s corner. When federal judge Chuck Haden handed down a pro-environmental decision about mountaintop-removal mining in 1999, Byrd actually went to the length of trying to get Haden’s decision overturned in Congress.

Then, out of nowhere, last December he started attacking the coal industry, saying: "Change has been a constant throughout the history of our coal industry. West Virginians can choose to anticipate change and adapt to it, or resist and be overrun by it. The time has arrived for the people of the Mountain State to think long and hard about which course they want to choose." He meant, without saying it, the rape of the mountains that was no longer ignorable. He also went after Massey Energy more recently, after the hideous deaths of the 29 miners in that April explosion in his home county. Most surprisingly, he recently voted against the Lisa Murkowski resolution to strip the EPA of authority to define and regulate greenhouse gases. Rockefeller voted for big coal. Byrd bucked it. I don’t think he ever would have done that five or 10 years ago. It would have been fascinating to see what he would have said about coal and Massey and Don Blankenship over the next few years.

Byrd is not easy to categorize or eulogize. He was not avowedly liberal or conservative, and as such doesn’t suit this partisan era. As a man who taught himself law, read ancient classics, used a few too many five-dollar words and was never any good at all on television, he was also out of place in our age. But he spanned ages, embodying the good and the bad of America over those decades, and standing consistently in what Arthur Schlesinger called the time of “the imperial presidency” against presidential power. Many of the tributes that are pouring in today from his colleagues are coming from people who haven’t the slightest idea what his career was actually about, or who do but who simply put partisan gain ahead of constitutional belief. The Senate will always need a Byrd. I’m not sure who the next one will be, but I am sure it will miss this one.

Michael Tomasky is a political columnist for New York magazine.