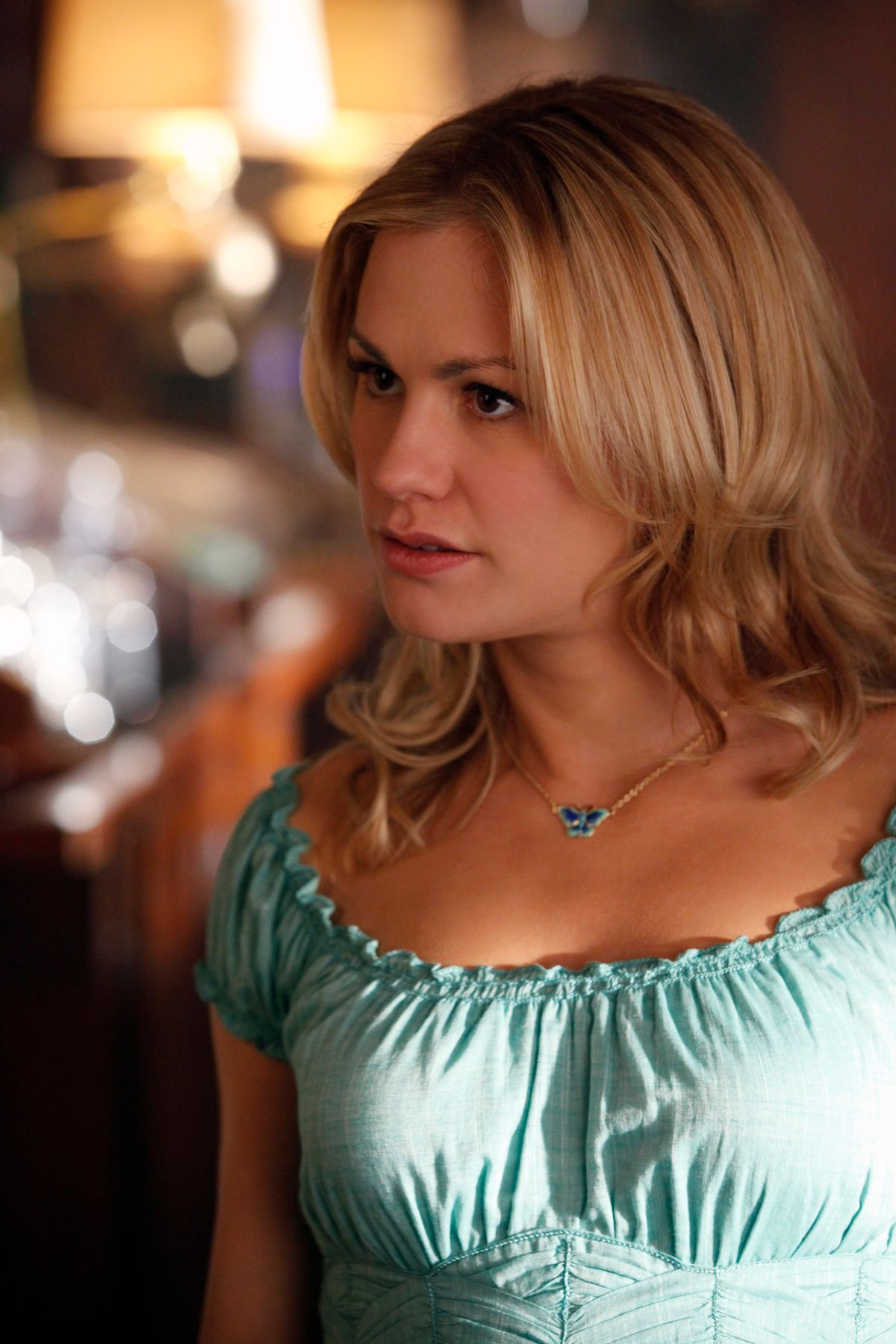 Last week ended with a werewolf walking across Sookie's living room, as a shot rang out…

It's still doing that… tick, tick, tick… still… flying... slowly… across… the… room…

(So, while we're waiting can I just point out it's been a whole week and no one has posted a mash up video on YouTube called "Hitler Finds Out The Werewolves Aren't Really Nazis." I know it's World Cup, and everyone was busy with "Hitler Finds Out Germany Lost to Serbia." But do we really need five different versions of that? Just sayin'.)

… Finally, Eric slo-mo jumps in front of the bullet giving Sookie time to read the werewolf's thoughts. Something to do with "Jackson." Eric takes the bullet to keep the Were alive, hoping to find out who he's working for. But Eric must kill the Were before the Were starts ‘roiding on the V he's managed to suck from Eric's gunshot wound. Eric apologizes for getting Sookie's "rug wet."

Rugs remain an ongoing concern as we cut to Talbot, consort to Russell, the Vampire King of Mississippi. Talbot is having a meltdown over the heirloom tapestry used to put out Lorena. It is explained to Bill that Mississippi vampires do not flambé ex-girlfriends for dinner. Russell wants to know "vampire to vampire" how much Bill loves Sookie and lets him know that if Bill doesn't turn her "the alternative is to subject her to the vicissitudes of mortality and to the mercy of forces such as, for instance…" creepy sigh "…me."

Back in Bon Temps:

Lafayette tells Jason that he's still trying to keep Tara away from "pointy objects." But too late. Tara has already shagged Vampire Pointy Boots, whose name we now learn is Franklin.

Jason has decided to become a cop. He has everything a great cop needs, except perhaps a median IQ. But he's optimistic. As he explains to Hoyt, there are "two kinds of people in the world: People who got no dreams. People who got dreams and don't do nothing about it. And people who go out and fulfill their dreams. And I don't know about you, but I'm the third kind." Hoyt looks like he's thinking about the fourth kind, people who got dreams, but sometimes confuse the numbers two and three.

Sam's search for his birth family is not turning out well. For one thing his birth dad, Joe Lee, lounges around in underwear that looks to be older than Sam. Pretty much the only thing they have in common is that homoerotic vibe they both keep sending out. But judging from the affectionate couch pose Joe Lee has struck with Sam's brother, Tommy, Dad's vibe may not be as healthy. Wisely, Sam cuts visit short. But his newfound family shows up at Merlotte's. Sam offers to buy them lunch. Judging from Joe Lee's excitement this is the first time anyone has ever bought him lunch. It's also the last time, as lunch extends into happy hour with Joe Lee ordering a generous round of shots, for himself.

Jessica calls Pam to get some advice on what to do about the missing body of the trucker. But Pam is "in the middle of something." Another rug! This one between Pam's girlfriend's legs. This is a foreshadowing of things to come (yup, a shameless pun.)  By the end of this episode "giving head" will have two unusual new definitions.

But before we go there, the mood takes a somber turn. Tara and Sookie attend Eggs' lonely funeral at a gravesite very close to the grave of Bill's son, Thomas. Bill flashes back to 1868. Thomas died of small pox and no one will bury him for fear of catching it. To bury his son, Bill reveals himself to his wife, but eventually must renounce her to appease Lorena. After the flashback, Bill decides to take Russell seriously. With a heavy heart he renounces his human (Sookie) and his Queen (Sophie Anne) and pledges his fealty to the kingdom of Mississippi. Sob.

If my sob doesn't sound entirely sincere, it's because Eric has become like the Vampire version of Santa. First he gives Sookie the cutest werewolf escort for her road trip to Jackson. (Alcide Herveaux who is still hurting over his ex, Debbie, who has taken up with a bad pack.)  Then Eric shows up at Laf's house with a V dealer car in a shade of red so gorgeous I'm convinced it will permanently discourage Laf from ever wearing that piss shade of yellow he's so partial to.

Eric's not the only Vampire bearing gifts. Jessica finally finds out what happened to her dead trucker, when Franklin shows up to surprise her with the trucker's severed head. (Giving head, unusual definition #1). Earlier on, Hoyt found the rest of the body, prompting Bud to quit as sheriff, which may mean a promotion for Andy, and probably a spot on the force for Jason, regardless of his other challenges.

Sookie and Alcide visit a Were-bar. Sookie goes into a backroom with a werewolf who is either going to rape her or offer her dancing lessons. (He's played by Don Swayze, and will be known in the rest of this recap as the Were-Swayze, because I find this a creature even more delightful than the Were Nazi.) Sookie reads the Were-Swayze's thoughts and discovers that he kidnapped Bill. Also, the Were-Swayze has no plans to dance. Sookie screams. Alcide arrives to the rescue. It's good that he has something to distract him. His ex-girlfriend, Debbie, is engaged to -- of all people -- Cooter!  Who is, according to Talbot, dumb as a box of rocks, although Talbot does concede that this might not be fair. "To boxes. Or rocks." Oh, snap!

Franklin shows up at Sookie's house to court Tara, who's not thrilled to see him. But of course he glams her.

The episode closes with Bill indulging an unexpected dark side. He not only rapes Lorena, but twists her head around, Exorcist style, until blood starts oozing bile-like from her mouth. Giving head, unusual definition #2.

Next Week: All hell breaks loose when Talbot drops by the guest room and discovers what's been done, again, to the rug.

Wish List: Alcides' girlfriend's full name is Debbie Pelt, a name which begs for another Eric and Godric flashback, this time as they infiltrate the top secret golden age of 70s Were-porn.